But that may not save his scalp. 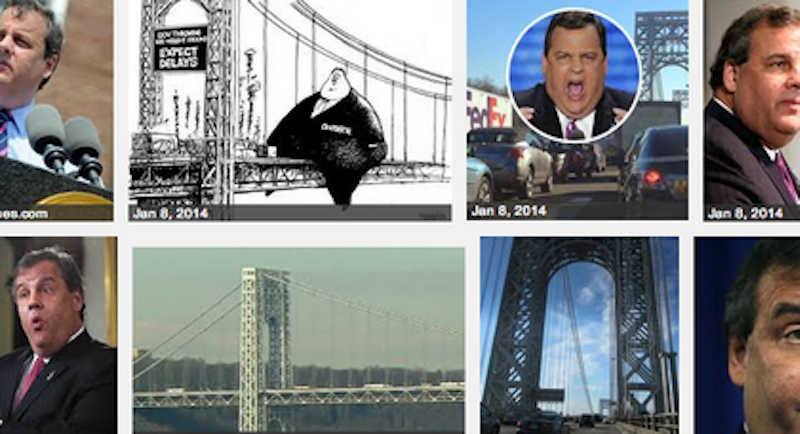 A strange thing happened to New Jersey Gov. Chris Christie (R) on the way to the White House. He was totaled by an email. And from that homemade predicament of a manufactured traffic jam, competing impressions of Christie have spun into freeze-frame images of how he sees himself vs. how others view him. In the eye of the beholder:

These days Chris Christie may be all or none of those things except just another cornered politician trying to save his scalp, or worse, an entertaining boor and an arrogant blowhard. Nonetheless, he is the best political performer the Republican party has and still, despite the temporary setbacks, the leader of the GOP’s presidential pack for 2016. His marathon news conference was a crash course in performance art that ought to be replicated and taught by the Republican National Committee.

But before that moment arrives, Christie must weather three parallel investigations provoked from within his tight little circle of cronies who, according to rampant but unproven speculation, sought to punish a Democratic mayor for refusing to endorse Republican Christie for governor: an investigation by two legislative committees with subpoena power; an inquiry by the U.S. attorney to determine whether federal laws were violated and a grand jury should be convened; and an investigation by federal auditors to decide whether $25 million in federal recovery funds were misused in an advertising campaign to boost New Jersey tourism following the devastation of Hurricane Sandy. The legislature has hired as its special prosecutor the same attorney who sent former Illinois Gov. Rod. Blagojevich (D) to prison.

Soon the true Christie will out. Twenty subpoenas have been issued to 17 individuals and three organizations to appear before the special legislative committee investigating the gigantic traffic snarl, supposedly an act of political retribution. Christie has lawyered up. The resolution establishing the investigative committees runs through 2016, a long drawn-out two years of hearings, testimony and headlines, right into the presidential election year.

In his state of the state address, Christie approached the traffic jam imbroglio head-on, as he should have: “Mistakes were clearly made,” he said. “I know our citizens deserve better. I also want to assure the people of New Jersey today that what has occurred does not define us or our state.” True enough. New Jersey is more defined by The Sopranos and Boardwalk Empire.

But here comes the kicker and the line that has tongues wagging in the New Jersey Assembly: Christie pledged to “cooperate with all appropriate inquiries.” So just what, it is fair to ask, does New Jersey’s governor consider an “appropriate” inquiry?

It is the nature of investigations, inquiries and subpoenas to scare the stuffing out of people, the innocent as well as the guilty, the piano player in the whorehouse as well as the whores. Each is wondering what the other will say, but the uppermost question is, who’ll talk. Prosecutors like to deal up, cajole a little fish into talking about a bigger fish. Perjury is the only crime a person can commit during testimony. Knowing about a crime is not a crime. Lying about it is. Fifth Amendment protection against self-incrimination is the dreaded option. It usually provokes suspicion of guilt.

If nothing more, at least two of Christie’s intimates are guilty of stupidity. They used emails to transmit their transgression without considering that once they’re sent the emails are easily traceable public property. And they, no doubt, are the two that will most likely be the objects of the investigators’ affections.

They are: Bridget Anne Kelly, the fired deputy staff chief, who tapped out the now infamous email, “Time for some traffic problems in Fort Lee,” to David Wildstein, the Christie-appointed Port Authority commissioner, who responded, “Got it.” (Wildstein has volunteered to talk in exchange for immunity.) The phony traffic study followed in September which caused the massive tie-up at the GW Bridge. Christie called Kelly a “liar.” Nonetheless, thousands of pages of emails and documents have created a paper trail that leads directly to the governor’s office. They, too, have been subpoenaed.

Another name that figures prominently on the list of investigation invitees is that of David Samson, a politically powerful lawyer and former attorney general, Christie adviser and chairman of the Port Authority of New York and New Jersey. One evidentiary email says Samson is “helping to retaliate.” Though Christie denies any foreknowledge of the planned traffic tie-up, or having seen Samson for months, The Wall Street Journal unearthed a photo of Christie and Samson together on the third day of the four-day traffic jam.

Christie likes to brag about bipartisanship in heavily Democratic New Jersey. But as usual in such circumstances, it comes with a reciprocal back-scratch. According to local reportage, Christie has an invisible handshake with a Democrat by the name of George Norcross, an insurance broker, who is considered the supreme political boss of New Jersey.

Through that alliance, Christie is able to work his mojo with the state’s Democratic-controlled legislature. Christie earned his reputation as a crime-busting prosecutor who sent many errant politicians to prison. The wonder now is what he overlooked and what he retains in his memory circuits. But declaration of independence time—not to mention get-even time—may have just presented itself.