He’d have to be very lucky to get elected governor this fall. 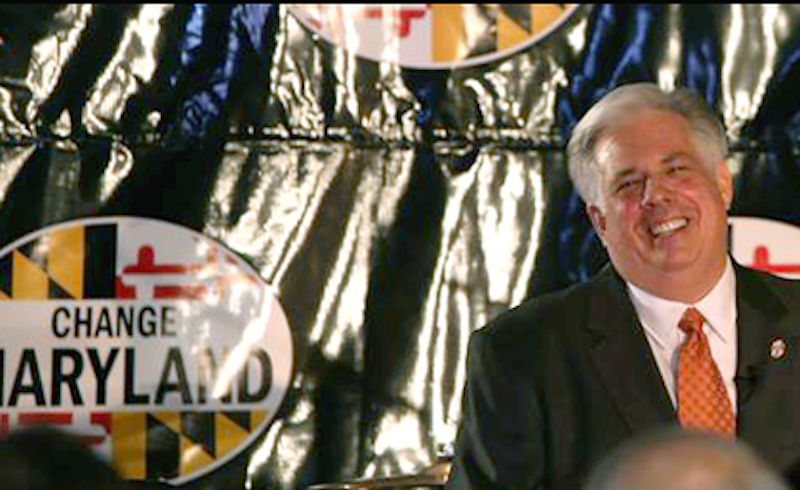 Larry Hogan enters Maryland’s Republican race for governor with the dual curse of proving he’s his own man and an agent of change or merely a proxy for the restoration of the administration of the most recent GOP governor, Robert L. Ehrlich Jr.

Whether Hogan likes it or not, that’s the rap sheet the competition, if not his Republican opponents then surely battle-ready Democrats, will wrap around him as he enters the race late and with the campaign themes already laid out by those who preceded him.

A brief bio moment for those who’ve been living under a rock: Hogan served in the Ehrlich administration as appointments (patronage) secretary and considered running for governor in 2010 but stepped aside when his old boss decided to give it another try. Ehrlich had been governor from 2003-2007 and was defeated by the incumbent Democrat, Martin O’Malley, who beat Ehrlich again in the 2010 re-run.

Hogan, an Annapolis real estate broker, has organized a group called “Change Maryland” which claims 75,000 Facebook friends that he’s now converting over to his political website as what he hopes to be the backbone of his campaign. Hogan characterizes the organization as a like-minded cohort of Republicans, Democrats and castaways from politics as usual. It has a Tea Party-ish sound just when Tea Party influence is petering out.

“I think the state’s way off track, headed in the wrong direction,” Hogan was quoted as saying. “An overwhelming majority of Marylanders want to see dramatic change in direction in Annapolis.” And, “We can’t change Maryland without changing governors.”

Hogan’s also been critical of O’Malley for a series of tax, toll and fee increases, by Hogan’s count at least 40 times over seven years. But the score is even on that point. The very same Ehrlich administration of which Hogan was a member raised taxes, tolls and fees by $3 billion during a single four-year term in addition to annual budget increases of nearly 10 percent, almost triple those of the O’Malley years. O’Malley would argue, of course, that it’s not necessary to be profligate to be progressive.

To be fair, Ehrlich was stuck with the bill for the unfunded Thornton education program that former Gov. Parris Glendening left behind, further contributing to the massive structural deficits of recent years. Glendening also ordered $60 million worth of new voting machines two weeks before leaving office and left the bill for the hardware on Ehrlich’s desk.

There’s another ironic twist to Hogan’s nascent candidacy. Among those seen attending Hogan’s Change Maryland gatherings was former Democratic Gov. Marvin Mandel, a political artifact from the 1970s (and my former boss). Mandel supported Ehrlich in 2002 and 2010 and is now affiliated with two conservative organizations, the Maryland Public Policy Institute and the Maryland Business for Responsive Government. (Mandel was not invited to O’Malley’s final state of the state address as were two other former Democratic governors, Glendening and Harry R. Hughes.)

Hogan’s father, Lawrence Hogan Jr., an ex-FBI agent, Congressman and county executive, ran for governor in 1974, hoping to oust Mandel, but was defeated by Louise Gore in the GOP primary. Confident of victory, though, Hogan hired a controversial Watergate investigator, John “Fat Jack” Buckley, who had close ties to the Republican party, to dig for dirt on Mandel. Buckley was soon outed and made a laughingstock with the sudden appearance of bumper stickers that read, with a smiling elephant in the corner, “Fat Jack is Watching.”

Money talks. Hogan has said that one of the enticements to run is the paltry bank accounts of his GOP competitors who all declared many months before he did. Harford County Executive David Craig has reported funds of $182,000, Del. Ron George, of Anne Arundel County, has $15,450, and Charles Lollar, a Charles County businessman, is largely self-financed.

But the gods bumbled when it came to apportioning campaign money in Maryland, an advantage usually associated with Republicans but here perversely assigned to Democrats running this year. Lt. Gov. Anthony Brown, the designated heir to the O’Malley epaulets, reported having $7 million on hand, and his aggressive challenger, Attorney General Douglas Gansler, has $6.3 million in the bank. The third candidate, Del. Heather Mizeur, of Montgomery County, has agreed to accept public financing and is therefore limited to spending no more than $2.5 million in taxpayer-supplied money.

The missing link in this year’s Republican election cycle is the Maryland fundraiser Richard Hug, who died last year. Hug was the one-man gang of the GOP’s money machine, a true believer in Republican orthodoxy who put his money where his mouth was. He raised nearly $20 million for Ehrlich for the 2006 race against O’Malley, and another $11 million for Ehrlich in 2010. In his spare time, Hug was one of George W. Bush’s tight little circle of bundlers who raised hundreds of thousands for the Republican president.

A Republican candidate can win the Maryland governorship only if the stars are aligned in a comically skewed attitude—when a Democrat commits some terrible deed against the taxpayers, or when the Democrats engage in such a vicious primary that they are fractured and unable to recover and unify for the general, or when they present a thoroughly unacceptable candidate.

In the first instance, Republican Theodore R. McKeldin won in 1950 after the incumbent Democrat, William Preston Lane, raised the sales tax by a penny. Ditto Spiro T. Agnew in 1966, when Democrats nominated perennial candidate George P. Mahoney in a racially divisive four-way primary election. And history replicated itself in 2002 when Ehrlich defeated Lt. Gov. Kathleen Kennedy Townsend who was viewed as not ready for prime time.

“I know a lot of people seem to think it’s nearly impossible," Hogan has said. “But I happen to believe that the mood of the electorate is at a point where they really want to see some change… I think people are willing to put aside partisanship and actually vote for the person they think is going to be the best one to handle the job.”

Hogan is either misreading history or misunderstanding the electorate. Only three times in the past 64 years has an aberrant electorate rejected a Democrat in Maryland. Over those years, and even since the last reversal of fortunes in 2002, the Maryland electorate has become much more diverse, sophisticated and, by turns, fed up with the antics of government in Washington which ripples into Maryland with its huge federal workforce and pool of dependent contractors. Maryland voters, with Democrats controlling a lopsided two-one majority, are generally content with one-party government as compared with the angry partisan standoff in Washington.

On this trip to the primary election on June 24, Democrats may be rivals for office as expected but they’re hardly bitter or torn asunder by a philosophically divisive issue such as they were by race in 1966 or put off by ineptitude in 2002. The party’s moving parts are aligned by interests as well as territorial allegiances for the primary but there is nothing visible at the moment that would preclude a united front in November.

The three Democrats, Brown, Gansler and Mizeur, are humming the same tune on most major issues such as mandatory statewide Pre-K and an increased minimum wage. But Brown’s been hammered on the botched and bungled healthcare introduction while Gansler suffered self-administered wounds over his appearance at a teenage beach party that apparently involved drinking as well as State Police allegations of reckless backseat driving in his Trooper-driven state vehicle, one of the perks of his job.

Hogan, by contrast, is burdened with the ear-numbing Republican tedium about lowering taxes and the promise to “bring fiscal responsibility to Annapolis.” In this era of the populist primal scream of minimum wage increases and economic inequality, the GOP tax cut lovesong sounds oxymoronically like more pandering to the rich at the expense of the already poor.

If he makes the unlikely trip to the State House, though, a good place for Hogan to start would be O’Malley’s jerry-built budget, which raids every available special fund—including the sacrosanct state pension money pool—to accomplish a three-card Monte hustle to balance the budget and escape his final year without another tax increase added to his record. Following Hogan’s non-binding campaign pledge, however, he’d be stuck with the tab in the same way Glendening stiffed Ehrlich. In Maryland politics, what goes around, comes around is more than just a saying.