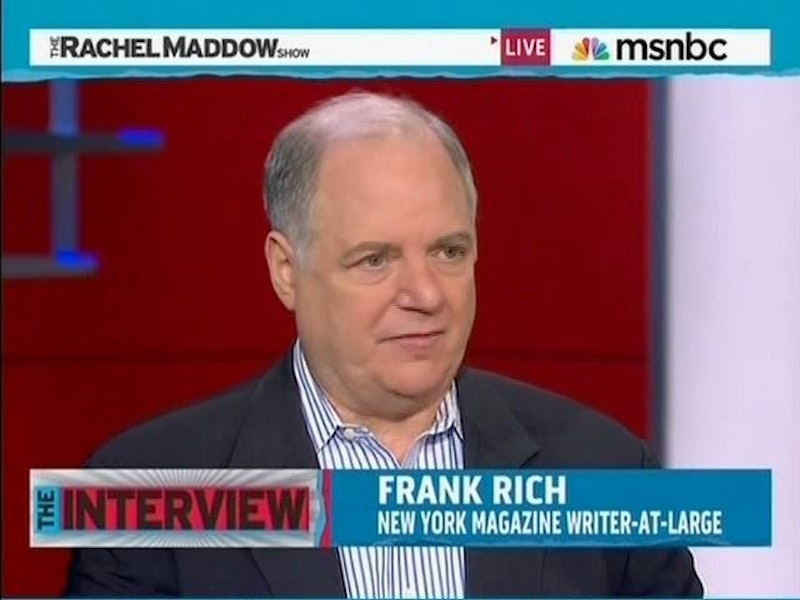 You always want the bad news first: Frank Rich, a 64-year-old relic from the days when Americans still took The New York Times seriously, is still issuing pretentious liberal position papers from an easy chair in Manhattan. Like many, I’d assumed he’d settled into early retirement, watching re-runs of Maude, boring the occasional college auditorium crowd, working on his tennis backhand or re-reading clips of his Times theater reviews.

The good news? When Rich does emerge from isolation, it’s in the pages of New York, the financially-strapped city magazine that’s succumbed to the inevitable and is downsizing to biweekly publication in March. Accurate print circulation numbers are not readily accessible in 2014—big surprise—but my guess is that Rich’s “longform” spittle-flecked, pat-myself-on-the-back essays don’t command a wide audience. He’s just no Ezra Klein.

His most recent New York article, “Stop Beating a Dead Fox,” breaks no new ground. Disguised as advice to fellow aging liberals who continue to get riled up, doubtless ignoring the advice of their physicians, over the shenanigans at Fox News, Rich clues readers into the non-secret that television news is a crumbling industry, and that even if Fox leads all cable-news networks in ratings (leaving CNN and MSNBC in the dust) its reach is limited. He quotes former colleague David Brooks, a “moderate conservative commentator,” as saying, “More people own ferrets than watch Fox News.” Could be true, notwithstanding that more people own pet elephants than read David Brooks. Never mind that Rich’s ideological brethren enjoy ranting about Fox—or The Wall Street Journal—and to deny them this small pleasure reeks of cruelty.

Besides, Rich says, Fox has damaged the conservative cause more than helped it, citing a pair of political analysts who note that in the years between 1952 and ’88 (“when the mainstream media reigned supreme”) the GOP won seven out of 10 presidential elections; after ’92, just twice. He conveniently omits the fact that since 1994, first with help from another relic, Rush Limbaugh, and then Fox, Republicans have controlled the House of Representatives in all but four years. Rich slogs on, stating the obvious about the network he labels “a right-wing propaganda machine,” at times “racist” and homophobic, by letting readers know that Roger Ailes, the 73-year-old Fox New president is not tech-savvy. “[Ailes] doesn’t have a clue that his great cable innovation at Fox, The Crawl, is aging as fast in the days of Twitter, Instagram, and Tumblr as ticker tape did with the advent of computer terminals.” We’ll assume, for charity’s sake, that Rich has heard of Facebook.

Yes, television news is in the toilet, but hasn’t that been the case for many years now? Aside from The Today Show, which my wife turns on in the morning for background noise and cut-in local weather reports—certainly not for reality-show knock-off antics of Matt Lauer, Savannah Guthrie, Natalie Morales and Al Roker—I watch zero TV news programs, even though at the beginning of this century I tuned into most of them, especially the Sunday shows. I don’t think that’s uncommon, even for a late-middle-ager such as myself; one of my kids might catch 10 minutes of Morning Joe on his laptop and the other just ignores it altogether.

I don’t fault Rich for the correct observation that Fox “is, in essence, a retirement home,” because, like its competitors, the median age of its viewers is north of 60, and, like elderly consumers of newspapers, these Americans will eventually die and not be replaced by younger generations. But, again, did Rich just catch that bulletin?

He concludes on an odd note: “The more liberals keep fighting the last war against the more and more irrelevant Ailes, the less prepared they’ll be for the political war to come.” Do tell, Frank: which exact political war are you referring to? The 2016 combination of a lucid Republican, backed by Libertarians vs. the sclerotic (in ideas and campaign technology) Hillary Clinton? I’m curious, but not enough that I’ll hang out at the mailbox for the next four months waiting for your next Senior Media Statesman proclamation to appear.