The President Rides in a Big Black Car

The New Yorker goes inside the bubble with Barack Obama. 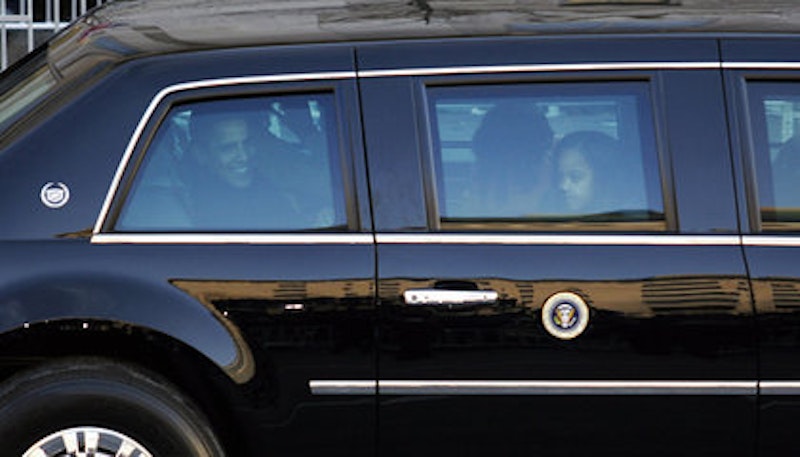 President Obama permitted journalist David Remnick to spend some time in his presence and ask some questions. The result is a long batch of words called “Going the Distance,” recently published by The New Yorker, which Remnick edits. The piece's theme is that Obama is now well into his time at the White House and he's feeling the punches. There're just a few years to go if he wants to get anything done. Now he's got to go the distance.

How do things look in the late-stage Obama era? It's five years from the President's first inaugural, and Remnick tells us that, “corporate profits are higher than they have been since the end of the Second World War.” When the President describes the action of the U.S. economy on the U.S. worker, he uses the phrase “ruthlessly squeezing.” When he got reelected, he lost white voters “by a margin greater than any victor in American history.” He travels in a Cadillac known as “The Beast,” a special limousine “armored with ceramic, titanium, aluminum, and steel to withstand bomb blasts” and “sealed in case of biochemical attack.”

The President is visiting rich donors on the West Coast. In Seattle the fundraiser is at Jon Shirley's house. He's half a billionaire and has giant sculptures on his lawn: “A Claes Oldenburg safety pin loomed in the dark.” In Los Angeles the host at one fundraiser is Magic Johnson, and at another it's media billionaire Haim Saban. At one point Obama sits in a conference room with “the heads of most of the major movie and television studios.” This is the business part of his visit to DreamWorks, but first Jeffrey Katzenberg gives him a tour. Obama joshes with Steve Martin, who's on hand voicing the lead in a cartoon movie, one about the earth being taken over, none of us being in charge anymore—because of aliens, as the movie has it.

When Obama talks with his interviewer, he is grave about the “ruthlessly squeezing” American economy. He says it's “making it more and more difficult” for “everybody, large majorities of people, to get a foothold in the middle class or to feel secure there.” Not just blacks and Latinos, he takes care to note—“everybody.” Take a look at “single-parent households, and drug abuse, and men dropping out of the labor force,” he says. That sociological horror show “used to be attributed to the African-American community in particular,” but now studies say the mess is spreading to “white working-class communities as well.” Nowadays you don't have to be black or brown to learn what it feels like to be squeezed. You just have to be standing there. Of course, some people are standing behind a good deal of protection, such as a million dollars or a billion or more.

Somewhere in Los Angeles, a co-creator of Friends makes conversation with Obama by asking him about life as the president. What has been the biggest surprise? “The bubble,” Obama says. He does wind up in some weird scenes. Driving through a fancy suburb after a nighttime fundraiser, outside the window there are “kids in pajamas holding signs and sparklers, the occasional protester,” and inside there's Obama, “secured in the back seat of the Beast. He could hear nothing. The windows of his car are five inches thick.” Pajamas and sparklers? Does anybody else see this when they look out their car window? And he can't hear anything.

Remnick's prose. He has a tendency to write like a set of flounced curtains. Margaret Dumont could hire him if she became a guest on Sunday talk shows and needed dialogue. “Mr. Quackenbush, I must protest,” she might say. “Ultimately, he envisages a new geopolitical equilibrium, one less turbulent than the current landscape of civil war, terror, and sectarian battle.” Or: “And yet, Mr. Driftwood, thoughts of a pacific equilibrium are far from anyone’s mind in the real, existing Middle East.” Or: “Mr. Firefly, one has to wonder about any president’s capacity to make these decisions amid a thousand uncertainties, so many of which are matters of life and death, survival and extinction.”

Something only Obama would say. It occurs in the middle of a 132-word passage that is all one sentence unreeling from out of Obama's mouth. Sixty-two words come before it, and 51 after, so the statement is packed fore and aft by Styrofoam ballast, stuff like “taking measure of my actions against the options and possibilities available to me” and “basing my decisions on the core values and ideals that I was brought up with.” Inside the mass there's a bone of an idea, a hard statement, and it's this. Obama sums up what a president can expect, morally, from being president, from fulfilling the job description: “There’s going to be tragedy out there and, by occupying this office, I am part of that tragedy occasionally.” By “part of,” he could mean “the cause of.” At any rate, he just came closer than any other president to admitting what the game is all about.