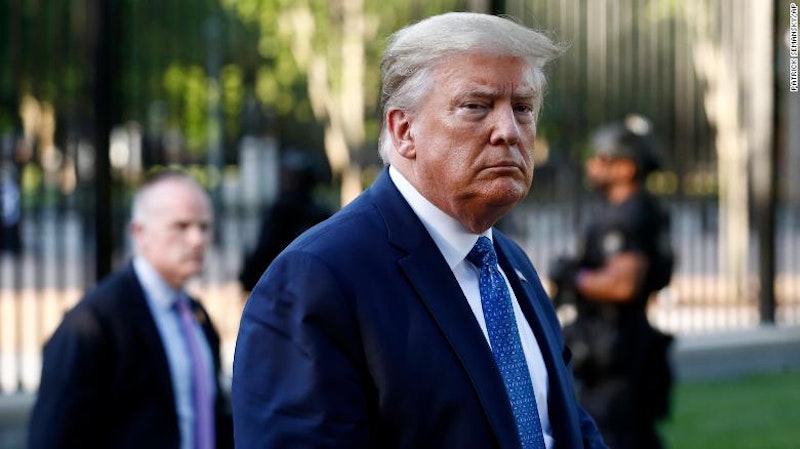 There’s not much point to showing you’ve got the DefSec and the Joint Chiefs chairman unless you actually have them. Rope the two into your symbolic photo, and the next day they’ll start explaining it was all a set-up and they’re not on your side. Accordingly, we find a “senior defense official speaking on the condition of anonymity” who tells U.S. News & World Report that Secretary Esper and General Milley were sandbagged. They’d been called to the White House because Donald Trump allegedly wanted a briefing, and then the craziness began. A later account from CBS News cites a “senior administration official” who says the briefing never even took place. At any rate, we’re told neither Milley nor Esper intended to take part in a photo op. Asked to come along on the President’s walk, they found cameras going off, and next thing the world was terrified of a coup warning.

This awkward Monday evening followed a contentious morning. In the Oval Office, CBS’s administration official says, Trump told Milley, Esper, and Attorney General William Barr that he wanted 10,000 active-duty soldiers deployed in the streets and he wanted them right away. (The streets of Washington or everywhere? We’re not told.) The three men “objected to the demand,” as the article puts it. But later that morning Milley and Esper played along with Trump during his conference call to the nation’s governors. They also started moving 1600 active-duty troops to bases near Washington. Still, Trump didn’t have his 10,000 soldiers in the streets.

For a substitute, Barr scraped together members of such federal forces as the US Park Police, the National Guard, and the Secret Service, together with a number of city police. In the early evening, minutes before the networks started their news broadcasts, this collection set upon the protesters in Lafayette Square and drove them out while Trump spoke in the Rose Garden. Trump then took his walk, Milley and Esper trailed along like chumps, and the iconography of a successful coup was deployed (as they might say at Vox). But that was no coup. That was playing around for the cameras. “It was just to win the news cycle,” a “Trump adviser” told The Washington Post. “I’m not sure that things are any better for us tomorrow.”

They weren’t. Public opinion didn’t trap Milley and Esper into staying with Lord Iron Hand and his promise of an orderly nation. Military elders galloped to put distance between the armed forces and Trump. “Angry and appalled,” they said, and “abuse of executive authority” and “secure—not infringe upon—the rights and freedoms” and “fellow citizens are not the enemy” and even “larger and deeper concerns about institutional racism.” On Wednesday Esper announced that he was against sending in the troops to stop the unrest. Milley sent a memo to the service heads reminding them about the Constitution, including “the right to freedom of speech and peaceful assembly.”

On Monday morning Trump and Vladimir Putin had talked by phone “at the initiative of the American side,” as the Kremlin put it. Trump’s an early riser and restless sleeper, and Moscow time is seven hours ahead of DC. Possibly he and his friend talked before Trump spoke to anybody else that day. The Kremlin says the two discussed the G-7, world oil prices, and other workaday subjects. But Jonathan Chait argues that maybe Putin put a bug in Trump’s ear about showing who’s boss and quelling dissent. If Chait’s right, our president started the day on a high note and then splatted into his usual round of noise and frustration. After getting bucked up by a pep talk from the world’s toughest man, the guy who took over Russia and made himself dictator, Trump marched into his office, banged his fist on the desk, and got bupkis. No soldiers in the streets. He got some Park Police and a photo op.

By the next day the Trump camp was back to dickering with the media. His acting chief of the Park Police said it hadn’t even been tear gas. Soon Barr was saying that he personally hadn’t given the order to go ahead and clear the park. Trump’s display of the iron hand had imposed nothing. All he took from his Playland fascist adventure was the footage and pictures and some highly damaged relations with his generals. Trump netted this haul by doing to Milley and Esper what George Wallace once did to Rosa Parks: He sprang cameras on them for a surprise photo op supposed to pass as an endorsement. Wallace pulled this move in the 1970s, when the Civil Rights movement had won and he needed black votes. Which is to say he did it because he’d lost. Trump’s losing too, even if his fans like the pictures.