We Are The Ones We've Been Waiting For

Obama's oft-used campaign quote is more aptly applied to Tea Partiers than his own chargeless base. 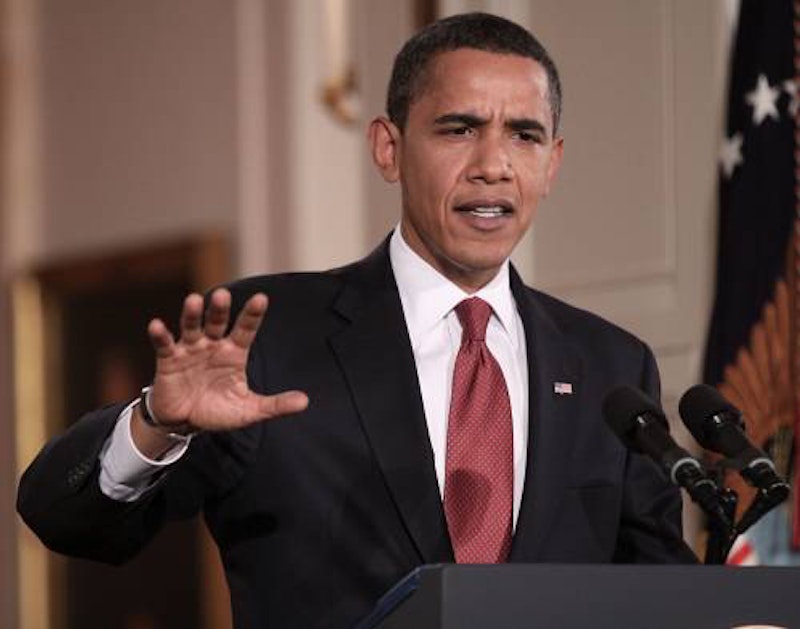 During the 2008 campaign, Barack Obama would sometimes tell his campaign crowds “We are the ones we’ve been waiting for.” The remark irritated the hell out of those conservatives who took notice of it. “What does that even mean?” was the general tenor of their response. It had the feel of the Hollywood gnomic, as in “Sometimes the worst thing that can happen is the best thing that can happen,” the truth bomb Tom Selleck dropped on a closeted Kevin Kline in (if anyone remembers) the late 90s comedy In and Out.

With a little context these nuggets usually flesh out quickly enough. If you’re living a lie, being found out may be quite a good thing, unwelcome as it is at the time. If you’re living in a non-operational democracy, you might want to stop looking for heroes and reflect that democracies function best when citizens get their act together and pay attention. Obama, in a tricky bit of footwork, presented himself as the man to lead this charge of non-followers. But, as it turned out, there was no charge, and now we’re left with Obama and nothing else.

Team Obama’s groundbreaking computer operation was fine when it came to mobilizing voters in a presidential campaign—it could figure out your address without being told! But it’s been lousy at mobilizing citizens to take part in day-to-day governance. That’s because there aren’t all that many citizens. For the most part there’s just us, part spectator, part consumer. We’re sports fans who vaguely sense that our mutual funds and the fate of our children turn on the big game. But it’s still a game (or a movie or a choice among lifestyle accessories). You don’t get out of the stands to play. If anyone suggests that you should, the suggestion bounces off. Either it’s a joke or, if expressed grandly enough, a noble sentiment that makes you nod. It’s not a plan for action because such an action is unthinkable.

I say this as someone who is probably more involved politically than most. In 2008 I gave the legal limit for campaign contributions, and it hurt, but that’s how much Sarah Palin scared me. She was a media balloon, and then the media popped her, and in between I was stampeded. But that’s what I get for spending so much time on the blogs. You see a couple of posts about the ratings and overnight polls for the Republican convention, and next thing you know you’re writing a check.

Notice that my ideals (a more just society, a fiscally stable government) are far off over the hills, and so are the outcomes of my actions (the Obama campaign team doing whatever it does with $2400 so that we may have a new president). Everything close at hand, my action and what spurs me to action, is a fudge produced by modern life’s immense apparatus for cushioning us from the immediate. I wouldn’t know what else to do.

That’s how most of us are, and Obama was foolish if he ever thought otherwise. But now for the counter-examples. There are the antiwar protesters, though they lost interest in the gig years ago and the wars are still around. There are the public union employees of Wisconsin, who are desperate. And there’s the Tea Party, the only national movement in 30 years to get political results in America through, in large part, the use of crowds. So, as it turns out, they’re the ones we were waiting for. Whatever money the Koch brothers and Dick Armey have channeled into the phenomenon, the core of the business is a bunch of pissed-off jerks willing to get off their duffs and make trouble. They are selfish, confused and ignorant, but those are not unusual ingredients for the making of history.

Of course, my contrast is not perfect. They may not have leaders (a movement with Michele Bachmann, Sarah Palin and Herman Cain for leaders actually has a set of pet rocks), but they do have blogs and they have media beacons like Glenn Beck and Rush Limbaugh. In fact the leviathan they’re flailing against is a media illusion, since the Obama administration has seen a grand attempt at collectivizing exactly nothing. But here’s the difference. The energy of the Tea Party crowd, once aroused, has not been entirely expended on the indirect; some significant portion of it has gone into showing up—often enough in rather patchy numbers, but showing up. A pack of Tea Party wildebeests even hassled a Congressional aide who wanted to get soda from a hallway vending machine. That’s direct action for you.

I guess the only forces greater than inertia are war, Scott Walker and the fear of death. The Tea Party is an old bunch, and the country has been heading away from them for a long time—gays everywhere, brown faces stationed behind leaf blowers and checkout machines, sex talk out in the open instead of behind bedroom doors or at least a paywall. The frustration of contemplating Adam and Steve getting married pushed the white whine crowd toward the voting booth in 2004. Now the presence of President Kenya McGovern in the White House has them acting like a 60s mobilization crowd with Bermuda shorts and campers.

The world has mutated into nightmare shapes, as it tends to do during the last years of someone’s life, and nightmares set people scrambling. But soon enough those years will run out. The Tea Party bunch is making trouble because they’re dying, and once they’re gone it’ll be someone else’s turn to glom onto new media and use it to kick up trouble about the changes that came down the chute at the same time as the new media. In between maybe we can get some governing done. But it won’t be because we march on Congress in the name of sanity. Until mortality dawns, people would rather play Angry Birds.