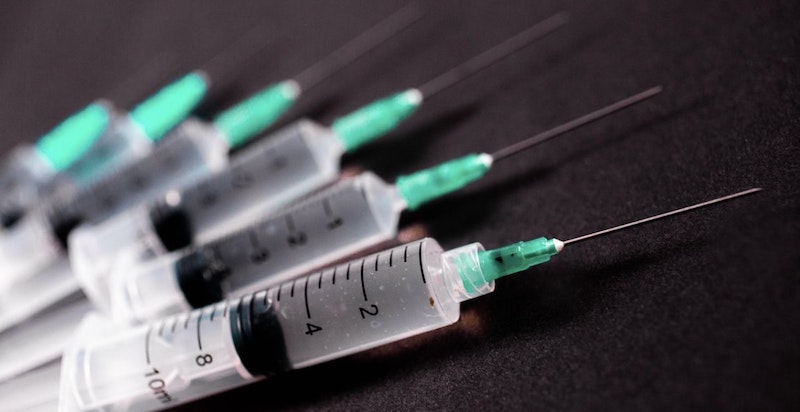 Humans will fight almost any time they can identify two subsets of the total population of about equal size to pit against each other—shirts and skins, you name it. Without much goading, they’ll fight to the death, even to mutual extermination. Vaccinated vs. unvaccinated was well on its way to becoming our latest excuse, each side with its handy built-in rationale for thinking the other side will kill us all if it gets its way.

The vax divide being concrete and physical, it’s easier for combatants to keep track of than something abstract and intellectual like right vs. left, but it maps a bit onto that more conventionally political schism. It’s always useful if preexisting animosities can be tapped in the creation of the new fault line. Yet these divisions often occur over precisely the sorts of ambiguous issues that, in a sane populace, ought to inspire caution and quiet reflection instead of confidently taking to the barricades: how best to handle climate change, at what point fetuses qualify as people, how to translate diverse private preferences into regulations for currently-shared public property, etc.

Precisely when calm and compromise are called for, people prefer to dig in and fight like hell. You have to suspect they fight in part to distract themselves from their uncertainty about the answers they’d reach if they reflected.

Once they start fighting, the odds are very good they’ll convince themselves that the empirical answers to the questions at hand will be precisely those conducive to shoring up their political positions. You wouldn’t want to risk drawing an empirical conclusion that undermined your tribe’s whole philosophy, after all! That could present as weakness in the ongoing battle.

So, unsurprisingly, the major political factions right now seem to gravitate toward “solutions” to the COVID problem that sound pretty much like their solutions to all other political questions.

The populist right is loudly and aggressively convinced that something akin to natural manliness is the best path out of the crisis: Let the germs fall where they may, boo-ya! Maybe.

The mainstream right basically trusts the vaccine regime—but not in a commie way. They’re getting vaccinated but strongly opposing government vaccination mandates that might have side effects such as impairing your natural cruise ship industry system.

The center-left, or liberal establishment, is just as happy with corporations as with Big Government these days, so it’s delighted to see mandates handed down whether crafted by airlines, Big Pharma, the Biden Administration, or the NFL. If it’s large and in charge, it’s trusted by today’s liberal establishment, which wants more.

Over on the real left, I’ve encountered at least one professor who thinks nothing short of a repudiation of the West’s individualist ethos and embrace of Asian-style collectivism will rein in our selfish, germ-spreading population.

Within my own small political tribe, libertarians, I recently watched a Soho Forum debate between law professor Ilya Somin and L.A. Libertarian Party activist Angela McArdle (not Megan) over whether vaccination mandates can be justified, and though McArdle just barely eked out a victory per the audience vote, I think intelligent observers were mainly left with an impression of two starkly different but highly predictable (libertarian) personality types.

Somin wearily, nerdily, and professorially acknowledged the civil liberties concerns of the involuntarily jabbed but thinks the calculus in lives saved, based on the most widely agreed-upon scientific data, is worth it. Young McArdle had the freedom-loving hearts of the crowd but undeniably went full demagogue, returning repeatedly to the story of one young girl who died from side effects of her mandatory COVID shot. Listen to Somin and such anecdotes seem to vanish in a haze of numbers, listen to McArdle and the numbers of lives—perhaps millions—hypothetically saved by a mandate seem to vanish in the tears for that dead girl.

After the debate, I suspect people basically voted their personality type. I happen to be a bit of both—science buff and anarchist ideologue. Utilitarian and rights advocate. Complete foe of coercion—who happens to think spewing germs on people can count as coercion (I told McArdle so after the debate, but I don’t think that argument will slow down her impressively gung-ho activist campaign to end mandates across the nation).

Given the seeming insolubility of these clashing views of the current crisis and the underlying clashing worldviews on which they depend, I’d normally lean toward the prediction that all of this will only be “resolved” when something completely out of left field happens to distract everyone from the topic, like COVID suddenly vanishing for no discernible reason or everyone becoming obsessed with some much more urgent problem like an asteroid strike. Sometimes, distractions like that are for the best.

That’s especially true if, as I suspect in this case, we're ultimately dealing with a disease, when all the number-crunching is done, that’s not that much more serious than a few simultaneous flus—but also with a vaccine that doesn’t have side effects too much more serious than flu vaccines.That is, reactions to all this should perhaps be nuanced rather than euphoric or apocalyptic, but people don’t like to do subtle.

As for me, I walked unharmed around New York City—epicenter of this disaster as it was of the defining disasters of the prior couple of decades—for the past two years without being vaccinated and without getting sick. Finally, I cave to the mounting regulatory pressure and get the jab—and two weeks later I get COVID (I’m recovering and will try to complete various neglected duties as the brain fog lifts, I promise). The temptation for each of the above factions to tell me what lesson to draw from all this will be immense, but they’ll likely think a bit too hastily.

We can’t say with confidence that getting the shot caused my illness, if the anti-vaxxers are tempted by that conclusion, since a vast portion of the city got the Omicron strain around the same time, seemingly without vaccination status or timing making much difference. Instead of being an outlier or rebel, I’m now just a pretty typical statistic. The orthogonal fact of Omicron may have rendered irrelevant the tribal vaxxed/unvaxxed statuses the city fought over so much for the preceding year.

But then, by now most Americans have had COVID—it’s estimated about a third already had it by the end of 2020—and most Americans have been vaccinated. As we continue to get sick periodically nonetheless, our vaccinated-but-sick populace may have to search for new tribal divisions to fight over, if anyone has the energy.