When did vulgar abuse enter politics? 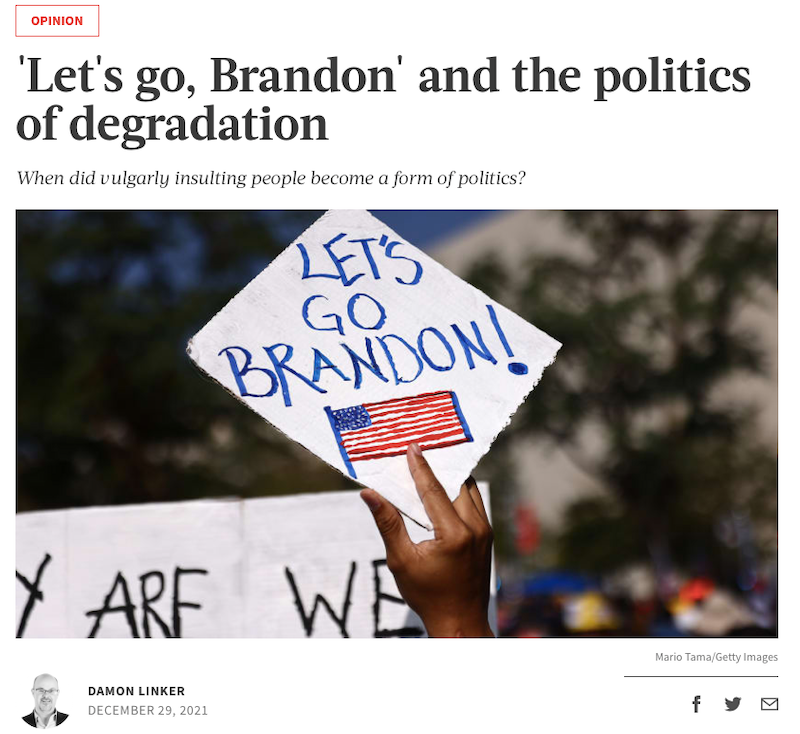 The article depicted above, by Damon Linker, has admirably done what opinion journalism at its best is meant to do: stimulate lively, informed discussion:

In fact, the article has generated a parlor game for us here at the homestead—a fine diversion from our spiritual rigors as, wallowing on the floor in front of our icons of Saint Vladimir, Saint Demetrius, Saint Cyril, Saint Methodius, and Saint Gleb, we moan and shudder in prayer, preparing ourselves for the Festival of the Nativity of Christ on (according to the Russian calendar) January 7.

The game consists of trying to answer seriously the rhetorical question expressed by Linker’s subhead and then discussing each other’s answers to judge their soundness—with the goal of, beyond amusing ourselves, determining when exactly it was that something radically new entered humanity’s political discourse. (It’s not lost on me that we’re debating this at the same time that we await the entrance of something radically new into human history, namely the Incarnation of Divinity—but this is perhaps not the place to develop the analogy.)

Brother Aiden, my spiritual brother and partner here at our Benedict Option compound, said, “Vulgarly insulting people became a form of politics on February 2, 1831, when Guizot, orating from the podium of the Assemblée Nationale, called Barbé-Marbois a ‘motherfucker.’”

Sister Marie, Brother Aiden’s wife said, “It happened on June 9, 1846, when Peel got a bit ‘shirty’ with Villiers in the Parliament cloakroom after the Corn Law debates.”

I placed the date on November 6, 1888 (Old Style)­, when Count Voronsky, deputy finance minister to the Tsar, cursed the Social Revolutionaries as “sons of pigs” after they bombed his carriage in Saint Petersburg and blew off his feet.

Mother, meanwhile, argued that ad hominem vulgarity entered political discourse just this autumn, on the day that students started chanting “Fuck Joe Biden” at the Notre Dame-FSU game, making the date of that game—Sunday, September 5, 2021—indisputably that date on which a radical novelty entered human experience. I must admit that her argument in favor of her position was a convincing one, and she took the day.

The rather “cozy” day, I should say. As we sat in front of the fire, each of us sipping a warm libation—except for the glaucomic Mother, who as usual crouched on the floor, “toking” on her “bone”—I had occasion to cogitate on the wonderful Scandinavian concept of hygge.

“I bet on the fucking Seminoles that day,” Mother muttered, glowering balefully and spewing skunk-flavored smoke, “and lost a dime. Suckers didn’t cover.”

Good news from Russia, where the authorities have closed Memorial International, the anti-Russian propaganda outfit that seems to have drawn support from Western sources; and jailed Yuri Dmitriev, whom Reuters calls a “historian of Stalin-era crimes” and whom I call, as the Kremlin does, a traitor, if not quite a liar.

The legitimate government of a country, acting to express the legitimate desires of the people over whom it rules, has every right to protect the sanctity of its historical memory. And if I admit that Dmitriev, and for that matter Memorial, have in some obvious sense told the “truth” when pointing to certain Stalin-era “crimes,” I also maintain that that fact is immaterial. There are different types of truth, and at this moment, as Russia’s very existence is threatened by a NATO-armed Nazi Ukraine, the “truth” of Russian historical identity must triumph over the mere facticity of obscure misdemeanors committed in the Lubyanka basement in 1937.

Meanwhile, as we Russian Orthodox faithful await both the Birth of Our Lord and the liquidation of Ukraine—two impending events of great joyous import—I’m finding myself diverted by Julia Child’s My Life in France. Mostly I’m amused by her enthusiasm for what seems, from this vantage point in culinary history, a cuisine bourgeoise many of the dishes of which are absolutely disgusting. But then I have never been one for forcemeats, preferring a simple, country-Slavic-derived diet heavy on kefir, berries, and groats.