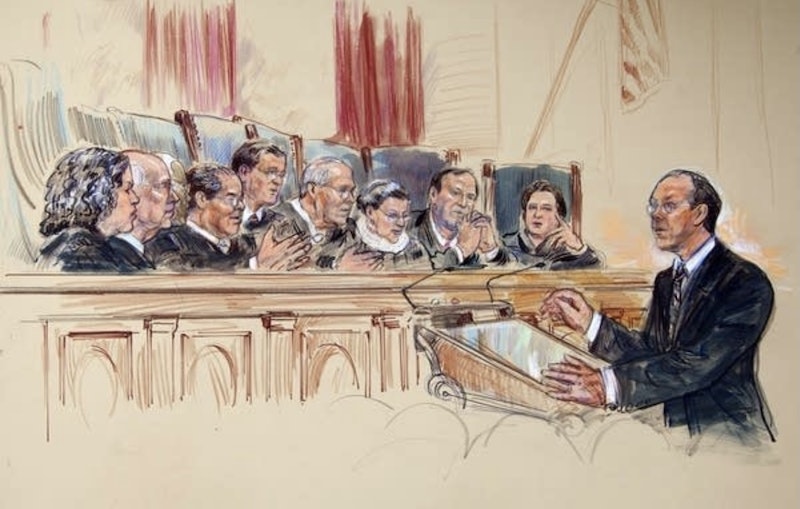 I’m not a lawyer. So perhaps I'm not in a position to judge the reasoning of figures such as Supreme Court Justice Sonia Sotomayor or Harvard University Professor emeritus Lawrence Tribe. I’m merely a humble logician, and one thing Sotomayor, Tribe, and I all agree on is that legal reasoning has its own standards and procedures, completely distinct from those of logic. Logically, a bit of legal reasoning might be howlingly invalid, in-your-face-fallacious, or amount obviously to a mere non sequitur. But lawyers will nod right along. I don't have the professional expertise to tell you why, or even how, they do that, but I'm quickly coming to agree with Sotomayor and Tribe that distinguished jurists such as themselves can’t be held to the usual standards for inference, which (I admit) is not to say that they ought not to be.

Lawyers have a big old appetite for red herrings. But who am I to criticize their diets?

Having briefly evaluated Sotomayor's amazing argument that the question of whether a Mississippi abortion statute is constitutional turns on how the decision will affect the Supreme Court's reputation, I turn now to the argument of Tribe and associates that mounting legal challenges to a presidential election (if those challenges are sufficiently implausible), amounts to inciting an insurrection. What I find particularly impressive is the relation of premises to conclusion in these cases: there is none.

"The legal path to investigate the leaders of the coup attempt is clear," write Tribe, Donald Ayer, and Dennis Aftergut in The New York Times. For example, Mark Meadows "traveled to Georgia last December, where he apparently laid the groundwork for the phone call in which the president pressured Georgia's secretary of state, Brad Raffensperger, to 'find 11,780 votes.'" That phone call was reprehensible, and there was no compelling evidence that the vote count was inaccurate. But it had no direct causal role in the January 6th attack on the Capitol. It just sits there, not an incitement to riot. An incitement goes something like this: "Grab your pitchforks and bear spray and meet me in the rotunda." Dealings between the White House staff and the Georgia secretary of state, not reported until later, had no direct role in the riot. But Tribe is relying on "legal reasoning" which, here as elsewhere, is evidently influenced by surrealist poetry.

"Representative Jim Jordan of Ohio reportedly promoted a scheme to pressure Vice President Mike Pence to reject duly certified Biden electors," write the legal authorities. A logician might demand that it be proven that Jordan's pressuring of Pence had a direct causal role in the violence, and might point out that there’s no plausible tale along those lines to tell. Also, that these events became public only after the events of January 6th and so can’t have incited the public to riot. What Jordan did was wrong, even if unavailing. That doesn’t make it an incitement to insurrection, at least by any rational standards. I trust that it's a good argument by legal standards.

"From their war room in the Willard Hotel," their eminences continue, "several members of the president's inner circle hatched a legal strategy to overturn the results of the election." They shouldn't have done that. But it the distance between hatching legal strategies and inciting mob violence, unbridgeable by any valid course of reasoning, is as nothing to distinguished legal thinkers. They want Trump prosecuted for incitement, on the grounds that he dithered for three hours while the riot was in progress. But failing for some period of time to try to stop a riot isn’t inciting a riot, is it? Or not by the sort of standards that would tell you that if event b occurs after event a, then b can't be the cause of a. These, however, are the sorts of standards that legal minds long ago transcended.

It appears that Tribe, Ayer, and Aftergut would accept and purvey any argument or, if “argument” is too strong, that they'd say any damned thing at all that would help them bash Trump and his followers. But they not only want to bash their political opponents, they want to jail them. And don't we all, really? If their arguments are logically incomprehensible, that just suggests they’re operating on a higher plane.

Perhaps if I got a JD, I’d find their reasoning compelling, or at least understand it to be reasoning. With some satisfaction, I point out that I'll never know.