No peace this Christmas morning. 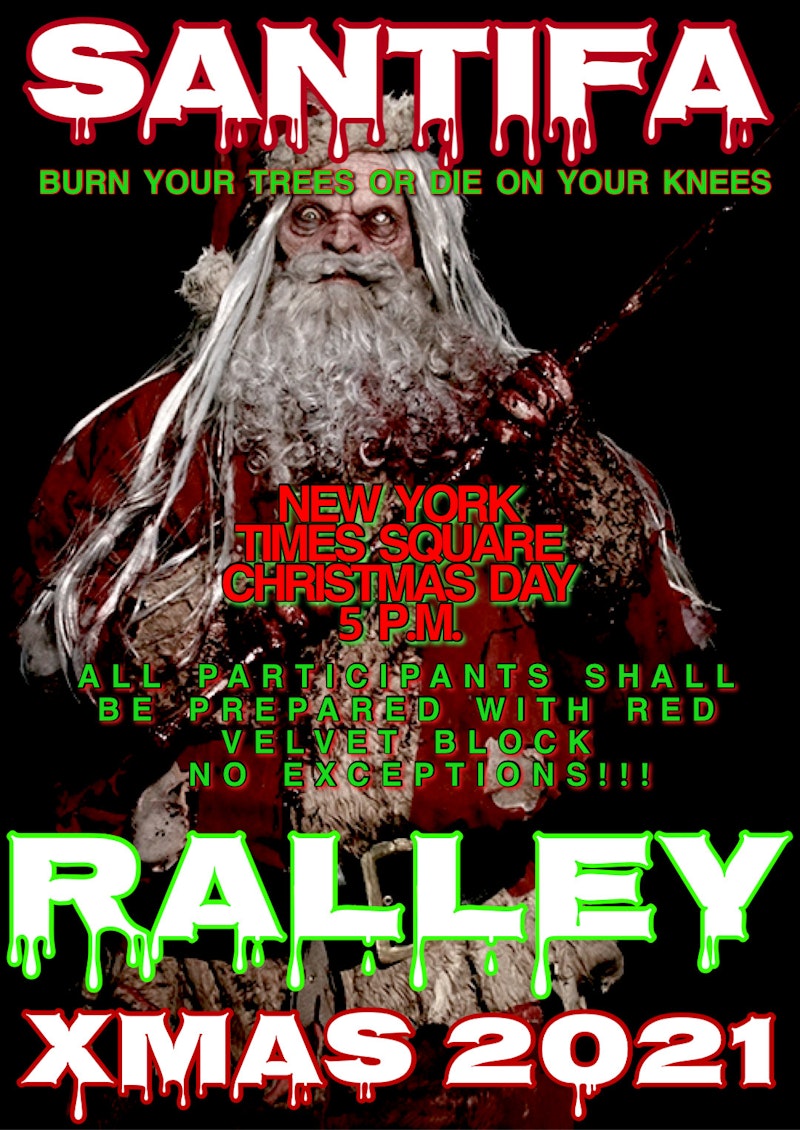 You might’ve hoped news this Christmas morning would bring peace. A sense of familiarity. The promise of tradition in the holiday season. However, events of this last week challenged that hope. Donald Trump, confounding his faithful, urged them to get vaccinated, saying, “It’s tremendous.” Nancy Pelosi, responding to inquiries of her colleagues’ unethical investment practices stated, “This is a free market in people.” Even Joe Biden was a bummer. When speaking about Omicron, he stated, “Cough, Ah bah dee! Ah bah dee! That’s all folks.”

Worse than suffering the incoherence of our leaders are statements by Putin, in Russian, to be extra-scary sounding, that anyone who tries fucking with his efforts to order Chicken Kiev via Ukrainian Grubhub will be “Turned into radioactive ash.” Whew daisy! I’ve been pissed about delivery if they forgot something like the blue cheese but then again, I don’t have nukes.

We were also reminded that some of the most puissant military and political minds of our time—Henry Kissinger, Jimmy “Mad Dog” Mattis, George Shultz, Sam Nunn and other sad, old, white dudes—had invested millions in the now-bankrupt Theranos. They were duped by the loveliness of founder/college dropout and wunderkind, Elizabeth Holmes. This prompted China and Sweden to collaborate on training a new regimen of special forces and intelligence officers with creepy voices, blonde hair and big, dopey, blue eyes. In other words, we’re fucked.

Just when you thought things couldn’t get any weirder, this week Wikileaks released documents originally obtained by hacker group, Grinch 2.0., a source with close ties to the North Pole. Reportedly, on a lark, Grinch 2.0 set the VPN to the North Pole and searched, “Is Santa Real.” Chillingly, they learned much more than they’d hoped. According to this massive cache of leaked documents not only is Santa real he also heads a previously unknown radical group of elves, an “Alt-Anti-Christmas” organization known as, Santifa. The primary objective of Santifa is to seek out and dox Christmas naysayers. According to a little known North-Pole darkweb source, “PrancerChan,” Santifa keeps a list which grows exponentially and is rumored to automatically be checked twice a year. According to satellite images Santifa amassed a mountain of coal which, it’s rumored, will was distributed on Christmas Eve. Sound familiar?

It’s still unknown whether Santa transported members of this radical group on Christmas Eve to cities around the world as he was unavailable for comment. Additionally, requests by Liz Cheney for texts and other communications have, so far, been ignored. Furthermore, the most arresting of Grinch 2,0’s findings was the discovery of what appears to be the “Santifa Manifesto.” Warning to Christmas traditionalists and executives of Coca-Cola, contrary to the American understanding of Christmas inspired by a celebration of the birth of Jesus Christ and Coke ad campaigns, Santifa has roots based in the somewhat strict, indifferent, traditions of The Old Testament and a loose interpretation of Japanese Soto Zen Buddhism and refers many times to a “BodhiSanta.” The following is an excerpt from this Santifa Manifesto.

It begins: “We, the brothers and sisters of the North Pole, and in the spirit of the true meaning of Christmas, have decided we must rid the Earth of the anti-Christmas scum that has increasingly plagued our world these last few centuries! How is it that the alleged consumerist nature of Christmas is any different from the that of the Super Bowl with its massive foam fingers bearing the logo of some professional sports team that cowers in the face of totalitarians? What of St. Patrick's Day, when people feel compelled to spend hundreds of dollars on cheap liquor they later regurgitate into a green, hat. What can one say of a button that demands, ‘Kiss Me I’m Irish’? In the time of Covid, it might as well say, ‘Kiss Me I Couldn’t Care Less If You Live Or Die!’ What can any of the participants of capitalistic cults say about wearing a Santa hat or leaving cookies that is superior or more comforting than any other pointless human ritual?

“Yet still, year after year these Santa doubters reveal themselves. Why? Most of the time it’s to seem edgy or cool. Men with their pitiful fear of other people realizing the basis for their motivations are sprung from a delusional understanding of life. How can a man be taken seriously if he reveals a belief in the existence of Santa or a love for Christmas and the joy that comes with it? We say, let them all drown in the nog of their arrogance and bigotry. The time has come to cleanse the world of these manic, insecure, sourpusses! Women, obviously, believe in Santa, so they’re fine.”

It continues, but gets much worse.

“The Secretary of Homeland Security has released a statement suggesting men wear a Santa hat, or two, for extra safety, or fake reindeer antler hats. This morning there were reports of reindeer mace used, mostly in New York. DHS also advised men to smile and wish family and strangers a Merry Christmas. Godspeed people of Earth. You have been warned.”