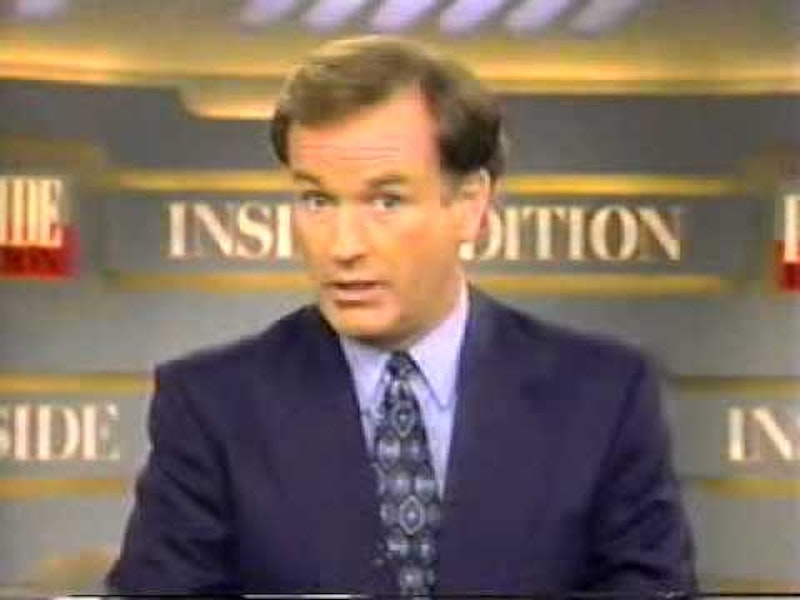 Whether or not The O’Reilly Factor survives this week, Bill O’Reilly will die remembered for his work at Inside Edition rather than Fox News. “‘To play us out’—what does that mean, to play us out?? … We’ll do it live, we’ll do it live, FUCK IT… WE’LL DO IT LIVE, FUCK IT!… Fuckin’ thing SUCKS.” Thank you for that, Bill. It’s not news that O’Reilly is a repressed and angry man, and we know that he’s a sexual predator. The world knew in 2004 that O’Reilly called up women while he jerked off, just like Philip Seymour Hoffman’s character in Happiness. Imagine if that guy was a conservative hero watched by millions of Americans every weeknight. I hope Bill gets Cosby’d by all this, because it’s hard to undersell how big of a negative impact he’s had on the conservative psyche in his many years at Fox News. An angry, abusive Irish Catholic prone to racism, homophobia, sexism, and tiresome moralism infecting the brains of all those people, influencing them and swaying their world view far beyond whoever they vote for.

The sexual pathologies of O’Reilly may never be understood by anyone, but a lot of circumstantial evidence is readily available on the Internet and in print. In 2001, he told MSN: “My thesis, you may know, is that nobody should ever talk about their sexuality in any regard ever. You should not define yourself that way. It just makes life a lot rougher.” There’s no discussion that the guy has some serious static in the attic, but who are we to judge and armchair diagnosis? The fact that the guy remains in his prestige time slot at Fox even though this has been public domain for nearly 13 years is insane. What’s especially galling is that people like O’Reilly, Roger Ailes, and Mike Pence project their pathologies and warp them outward, so we end up with crazy statements like the one above, Pence referring to his wife as “mother,” and Ailes exposing his dick to female employees, all while they lecture, legislate, and program grievances against other peoples’ personal lives.

Observe more of the dementia going on at the Avenue of the Americas offices of Fox News in New York: “During the meeting, Roginsky’s filing says, ‘Shine bizarrely asked plaintiff if she had seen the Showtime documentary on the band the Eagles.' Roginsky said she had not, so Shine helpfully suggested she watch it 'because the story of the Eagles was very similar to the story of Fox News, i.e. in the same way that such brilliant musicians as Glenn Frey, Linda Ronstadt and Jackson Browne could only have come together at ‘one place and one time in history,’ so it was with Bill O’Reilly, Sean Hannity, Suzanne Scott, Roger Ailes and Bill Shine coming together to form Fox News.” O’Reilly is obviously Don Henley, and I hate to say this, because I love Joe Walsh (“Life’s Been Good” is one of the most remarkably honest songs ever written by an arena rocker), but Hannity is Joe Walsh, just because he’s the goofball, I guess. The comparison ends there. I hope their pirate ship sinks sooner rather than later.