Michele Bachmann and the Leather Shop

Just another day in the life. 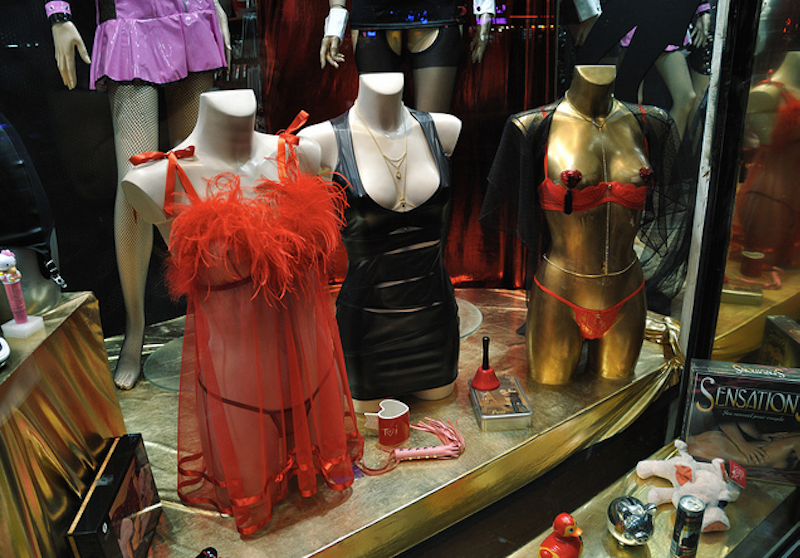 Marcus Bachmann turned to his wife and asked her if she was sure about this. “This can’t be it. I don’t want to go in there” he whined, but his wife knew. It was a crisp July evening, a heat wave had just broken across the country and Michele felt determined, and just a little tired. She was, after all, knee-deep in a campaign to win the Republican presidential nomination, so who could blame her? And for the first time, she actually had a chance of beating that Mormon snake, the really rich one who kept changing his mind on issues.

But there were some troubling omens: Marcus’ a.m. trips “downtown” that would last entire weekends, a dryness of the mouth, and severe, incapacitating migraines that left her dazed for hours… was this a sign from the Man upstairs? Michele, like any devout Christian woman, mashed her finger on a random Bible verse to find guidance. Leviticus 13:47-52: “He must burn the fabric, the woven or knitted material of wool or linen, or any leather article that has been spoiled; because the defiling mold is persistent, the article must be burned.” Remember the jacket Marcus spilled blue cheese on last week? Right… A burning in her heart commanded Michele to get her man a new piece of leather.

“Leather Fantasy? I don’t think they sell sport coats, honey. Let’s go back to the hotel.” Michele grabbed her husband’s fat hands and waddled him through the hanging beads doorway. This wasn’t Banana Republic: harnesses, whips, ties, gags, and countless other leather accouterments adorned the walls. Marcus blushed and his lips started quivering. The couple found their way to the counter, and a chiseled young man named Pablo. “Hello… hi.” Michele was nervous, but she knew what God told her to do. “I need a ball gag. Red, please. And a horsetail whip.” Marcus’ chin emerged from his neck. “Sweetie!” Michele stared her husband down, and he just shrunk a couple of inches. Pablo led them to a hall of fitting rooms, each numbered. Michele went for number three and Pablo reached out: “No… this for Calista and Newt. She makes him swallow whole sticks of butter. Whole cow in there.”

Michele grabbed her husband by the groin and talked right into his face. “Listen prick, I saw your phone. Little Korea boy is being interviewed right now. Get on the ground.” Before Marcus could spittle anything out he had a ball in his mouth and his naked back was being whipped. “God told me to run for president, and you told me to become a tax lawyer. You lose.” With that, she got a good shiner in, and just about knocked the ‘lil piggy out. “Gotta whip the gay away.” Gosh, I feel like Xena! Michele left her bloated blob of a husband on the ground and got ready for the night’s fundraiser back at the hotel. God was right, things started looking up after that: the migraines stopped, and Marcus went into hiding somewhere in East Asia, leaving Michele free to torture closet cases and reasonable, tolerant people all on her own. And who knows, perhaps this Femdom has some POTUS in her future…