A Sense of Betrayal

Staff Sergeant Javier Ocasio speaks out against an unjust war. 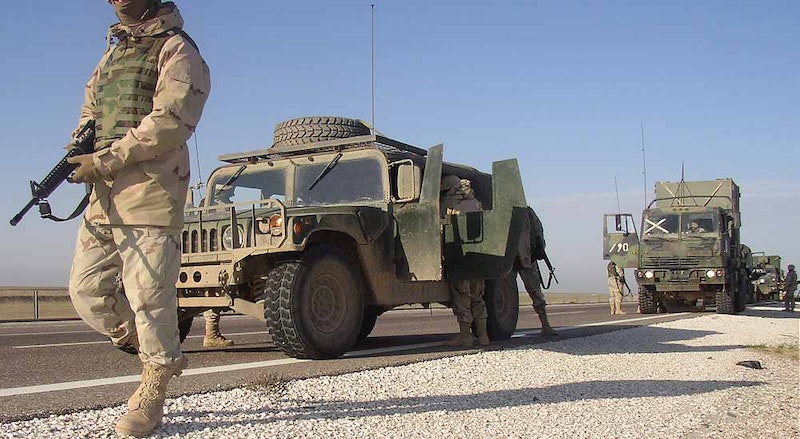 “The issue for me is the morals and ethics behind it, the standards that were let down, all the things that went wrong, you know that’s all I think about, how can the people that are supposed to be taking care of us take such a nonchalant attitude about what’s happening to us?” These are the words of Javier Ocasio, a staff sergeant who served in Iraq from July 2006 to October 2007. As one of the many victims of American imperialism, he feels betrayed by his leaders. He knows he was sent to the Middle East for oil, that his president lied America into war, and that Halliburton/KBR grossly neglects the army. Ocasio has suffered tremendously, but he has not given up. He is committed to fighting the system, and he is determined to do whatever is necessary to run for president in 2016.

The sense of betrayal is acute: “Anybody that’s ever been there [Iraq] man, knows straight up that… it’s about oil, everybody knows it’s about oil. They’re like, what are we doing here? This is about oil, why are we trying to, you know, whatever? This does not make any sense; we’re wasting our time, our lives. You know, just get us out of here! We don’t need to be here, they don’t even want us here. But nobody listens, everybody says, ‘Oh, they need our help, they need this, they need that,’ no they don’t, who are we to tell them what they need?”

In fact, the war is swelling the ranks of Islamic fundamentalists. “For example, one of my soldiers had his buddy shot in the face by a little kid, so now every time you’re out there, whether those kids you’re seeing from now on are armed or not, your mind is automatically gonna assume based on what’s happened to you the possibility of that happening again, so you’re gonna take a defensive posture, you’re not gonna take any chances, so based on actions like that, I can see why civilians get killed.” He emphasizes the following admonition: “I guarantee you that that point has not escaped them, that if they make martyrs out of their own people, they can get more people to fight their side and make us look bad.”

But those in the military who try to speak out, those who question their superiors about a counterproductive, criminal war of aggression, are silenced: “We have no choice but to behave that way and act and say these things outwardly, and then later when we’re amongst each other we know it’s a bunch of crap! Oh, man. If you let the wrong guy even hear your honest opinion that isn’t hooked-line-and-sinker into the military’s thinking as far as their policies and how things need to go, and that stuff makes it all the way up, oh man you’re in trouble.” He adds, “I’ve seen it happen to the wrong officer who spoke up at the wrong forum. And then you didn’t see much of that anymore… god knows where they put him or what they did to him to make an example.”

Ocasio has incurred many health issues, such as “chronic neck pains that won’t go away, the muscle spasms on the upper side of my back, asthma, my hip, my knees and my foot, the nerve damage to my elbows, I’ve acquired a bacterial infection in my digestive system, causing me to bleed for eight months straight.” He adds that “Where we slept, less than a mile away was a giant burn pit, and the giant cloud of fumes from that burn pit would curl over and go straight into our living area and we had to breathe that stuff, and you can’t leave.” He says that “Now I have all sorts of lung issues. I never had problems with my lungs; I go to Iraq, I come back, and all of a sudden I fail a run, I have trouble breathing, I get dizziness, my heart is having problems, I require inhalers now.”

Halliburton/KBR bears great responsibility for Ocasio’s health issues.  “After 10 months all of a sudden the rules changed. They put up signs that say ‘Don’t drink or do personal hygiene in the shower.’ When the water falls on the ground it stinks, it makes your gums bleed and swell up. And there’s only one contractor to purify the water.” More broadly, “There’s all kinds of things that happen to soldiers out there that have nothing to do with combat that KBR’s guilty of. And instead of the government holding them accountable for causing illnesses they have to pay more for in benefits, they’re not; the taxpayer pays.”

I asked him what he thinks of George W. Bush. He says, ““I’m surprised nobody has dragged his ass out and criminally prosecuted his ass, and I’m wondering why it still hasn’t happened.” Do the soldiers resent Bush? “Oh ya, [laughs] I never met a Bush supporter.”

Because of Bush’s lies and Halliburton/KBR’s relentless drive for profits, Ocasio has paid a tremendous price: “One of my friends was deployed to Iraq and Afghanistan multiple times. He was blown up three times. He died three times. Came back three times. And he has permanent damage to his nerves and his face and other parts of his body, and now he has a lung disease that’s gonna kill him. He’s a really close personal friend of ours.”

Ocasio says that his friend joined the army for the same reason he did, and for the same reason most people do: “it’s really simple. My dad told me he couldn’t pay for me to go to college. After high school I didn’t know what to do, so I enlisted.” In general, “Over half the soldiers will tell you their main concern’s the money. As long as they’re getting their medical benefits and what they’re due, that’s what they want.” But he says about his terminally ill friend that “I know for a fact that he in a heartbeat would exchange the money he’s getting paid in medical benefits and compensation, you know, for a cure to fix everything that’s wrong with him.”

But Ocasio bears more than just physical pain. Like most soldiers, he suffers from post-traumatic-stress-disorder (PTSD). He feels gripped by “an inexplicable sense of anger, frustration, lack of patience, a sense of where there once was life radiating from within me, now there’s darkness. Now I can only get happiness from without.” He explains why it’s so hard to adjust upon returning from combat: “I had disconnected myself, adopted a mindset to survive in an environment that was pretty extreme, and when I came back you can’t just undo something like that, which is why a lot of divorces happen among soldiers who come back from deployment, it’s much easier to attach to something new than it is to readjust to what you’ve left.”

The consequences have been tragic: “The wife and I got into fights, arguments, I found myself living the same routine that I lived when I was in Iraq, I found myself not caring about anything, not wanting to do anything, being mad all the time, having to wind myself up in the morning, having no patience for anything, then find myself being dragged by my wife to spend time with my [four-year-old] daughter, and I look at her, and she’s the most gorgeous thing on this planet and I couldn’t believe, I was shocked, astounded and mad at myself that my wife would have to drag me to spend time with this gorgeous creature that we’d made. It made me mad, pissed me off. I couldn’t understand why my reaction to things that I should inherently love to do were so negative, it just didn’t make sense.”

Even worse, shortly after his return his daughter died. This time Ocasio was failed by another system—American health care. The doctors failed to detect that his daughter was hypoglycemic, and on the day of her baptism she had a seizure and died because her blood sugar gel level dropped, and her brain didn’t have sugar to feed on. Ocasio had been in therapy, fighting his PTSD so he could be there for his daughter, and then the worst occurred. The pain is relentless: “I can’t enjoy anything the way I used to. I used to love video games for example, go places, talk to people, collect comic books.” Now he finds all these activities either impossible to enjoy or too trivial.

He feels a similar sense of revulsion when he watches the news. “I try hard not to watch the news to be honest; the last time I watched the news was at the VA hospital for about an hour and a half last week; it was CNN, and they were reporting on things that had just no relevance whatsoever… Why do I need to know that this girl, who’s a celebrity, bought a new dress?  Why do I care if these two people got divorced?”

He wonders, “Why don’t they stick to the truth? Why don’t they call things simply as they are? And don’t just report the news, how about say, ‘And if you want to do something about it or help us do something here’s what you can do.’ Instead of just saying, shit happens, why don’t they say ‘Call this number or speak to these people and do xxx?’” Ocasio sees through the deceit of corporate mass media: “So long as there’s a wig pulled over our eyes they can do whatever they want, as long as we’re watching what’s in front of our faces we won’t know what’s underneath our noses.”

He does find refuge, however, in art—he loves to draw— and he spends much of his time memorizing the Constitution, reading articles on the Web, and coming up with solutions. Javier wants to do what he can to get people together and force change in America. He thinks Obama has failed to bring meaningful reform. He wants to be the guy everyone can rally behind and run for President in 2016. He believes he doesn’t need much money, but just has to reach the right people through the Internet with a revolutionary campaign idea, an idea that’s really simple but he won’t reveal because he fears others will copy it. He says he’s always been very skilled at coming up with plans.

He believes we should not have two separate political parties, but rather one party that answers directly to the people. Rather than having politicians tell people what they can and cannot do, the people must direct the politicians. Javier feels the Constitution must be revised to provide America with goals for what our country should look like and considers three basic aims paramount: everyone who wants a job should be able to get one; everyone should be covered by medical care; and money should no longer be the sole object driving our economy. As such, instead of fighting imperial wars abroad we must invest in America—improve our decaying infrastructure, reform the for-profit health insurance structure and the broken education system, among many others.

After hearing Ocasio’s story it’s easy for me to lose hope in America. Every American should know his story, because we allowed our government to put him and many others in grave danger. But his perseverance, and his will to fight for justice, is inspiring.