Media communication completely collapses in this glorious summer of 2020. 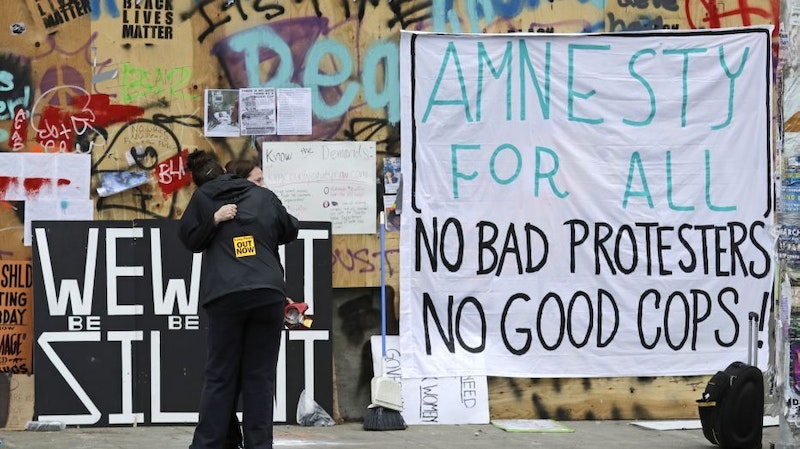 A perfect tweet to begin the second week of June, 2020: “weird media moment where nobody is rioting or whatever that much, but they can’t go back to coronavirus because everyone agreed they don’t care about it anymore. a new thing has to happen now.” A new thing has to happen now. The year’s almost halfway over, and for the first time since the quarantine, I realized how much time has passed when I remembered “The Iowa Caucus Did Not Take Place.” That was four months ago Monday, when Bernie Sanders was still visible and Joe Biden was a humorous afterthought, a footnote in 2020 that gave us Corn Pop and “Come on, maaaan.”

That was when Pete Buttigieg was a threat. Those were not the days.

Like I’ve said before, the coronavirus quarantine took on a surreal, existential quality when people were home long enough to start thinking about their lives. What am I if not my daily routine to work and the grocery store and dinner with friends and drinks later? Who am I if not for raves and Pride parades? Suddenly, an abundance of revived clichés: “in these troubled times,” “now more than ever,” “under these uncertain circumstances.” Before the end of March, COVID-19 advertising was fully integrated into the culture, with every commercial scored by plaintive piano and footage of firefighters and nurses smiling.

And then Minneapolis exploded. A new thing happened.

The last three months have massaged me into a corner. The only safe position is far away, from everything—just as Trump and his 1488 fanbase charge headlong into violent authoritarianism and total virus denial, so do the Democrats with their insulting stimulus packages and Dashikis. Instead of tempering or realizing the errors of their ways, everyone is digging in and blossoming as three-dimensional parodies of themselves.

“I wish I went out last week when it actually mattered and when there was a chance for real radical change,” another friend in LA told me. No, we agreed, there was never a chance for “real radical change,” this was all a quarantine dream, an excuse (for most people) to get out of the house, see their friends, and think they were doing something valuable and productive. And they were: George Floyd’s public execution wasn’t protested enough—but how can you blame those that simply couldn’t make heads or tails of all the things they were supposed to be doing “for the greater good.”

Should I go to a protest? What if I’m asymptomatic and I spread it to hundreds of people? If I’m at a Black Lives Matter protest, wouldn’t that mean I’m risking the lives of a community already disproportionately affected by the virus? Crickets. I asked certain friends, the same people who decried the anti-lockdown protests back in April and May, what they thought of the media whiplash with regard to public health—crickets. Nothing doing at all. No condemnations of the protest, no comment beyond “isn’t this crazy?” Yes, thank you, you should consider taking clients as a therapist.

Now, the revolution comes with cutesy graphics and illustrations showing you how to best protect yourself from an LRAD, one of the police’s deafening weapons and definitely something that shouldn’t be written about in Pitchfork. I’m not suggesting young people should remain apolitical—far from it—but you’ll never gain any meaningful information on changing the world from a website owned by Condé Nast, nor Instagram. The social media revolution was born and died in Tahrir Square, when still relatively nascent platforms were used against unwitting police and government officials stuck on old technology.

How can you organize the revolution on Zoom? How can you aspire to change anything if you don’t first ask yourself where Zoom came from. Why was everyone suddenly using it in March? What happened? And what is this asymptomatic carrier business? Are they contagious or not? As I’m writing this, WHO is “walking back” earlier claims that asymptomatic carriers weren’t a threat, which would put an immediate end to the lockdowns. No, they must continue, and we will keep speculating as to why there was, as Tim Dillon said, “a controlled demolition of the economy” that led to the greatest wealth transfer in history.

A theory, make of it what you will: just as impeachment failed to get Trump out of office, a new possibility emerges. What if we shut everything down? It was the right thing to do, looking at Italy, Iran, and China. There’s no denying or downplaying 110,000+ dead Americans, and any suggestion that this was a carefully constructed conspiracy to derail the world economy and send fascists flailing doesn’t stand up to January’s evidence. Every Democrat in office, along with Dr. Anthony Fauci, was dismissive of the virus in January. I didn’t hear Bill Gates yelling at everyone to stay in dark, locked rooms for two years while he fixed the world.

Perhaps scariest of all was watching “the conspirators” flail in real time. These people, much like the cops who act like broken automatons and brainless blocks, had no idea what to do about a potentially civilization-destroying disease. That was the reality in March 2020, when every day felt like a new 9/11. But now, as summer hits hard, there’s an unspoken cautious optimism that the worst is over, that…dare I say?…the second wave may never come. Knock on wood, of course.

Yet the world’s still shit. The protests of the last two weeks wouldn’t have happened without the lockdown, and while it’s an added bonus that so many millions of people offered themselves up as the control group for a COVID-19 herd immunity test, that strange, strange cloud that settled over the world in March ain’t lifting anytime soon. Things have not gotten better and people are pissed—can you blame them?