NASA's Perseverance, if all goes well, will land on Mars in February 2021. 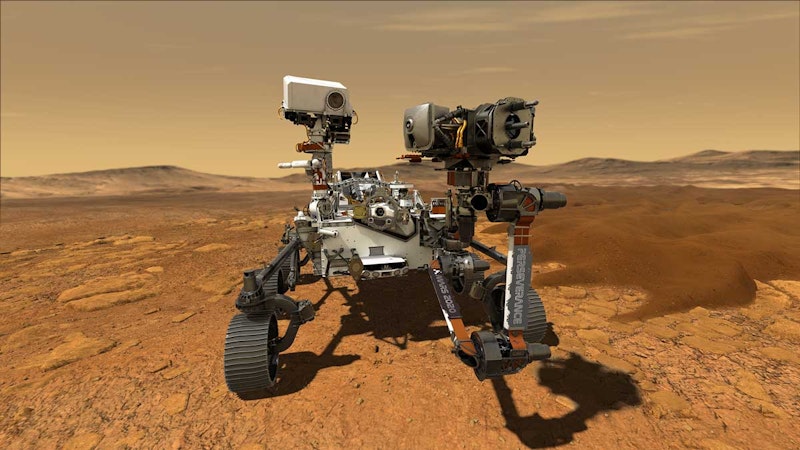 There was a joke running around the Internet last week in reference to Bob and Doug. Everyone needs a moniker these days, gotta keep up that brand recognition, right? Bob and Doug are the latest U.S. Astronaut team, and the jokes suggest they picked the perfect time to leave the planet, and might not be in a big hurry to return, what with a pandemic, protests, cities on fire, tropical storms and typhoons simultaneously. Space X really got Bob and Doug out of town.

I’m all for spending tax dollars to pay Elon Musk as a third-party developer of dependable, semi-recyclable crewed space flight. The President says we’re going back to the moon, which seems to me sort of “been there, done that,” but Musk’s always wanted to send humans to Mars. Space X believes a crewed mission to the Red Planet is doable, and they’re going to spend a lot of their own money getting ready to go.

In the meantime, NASA itself is returning to Mars, with some very interesting payload. The Perseverance rover will carry along a drone helicopter known as Ingenuity. Without getting overly geeky, we can report that Ingenuity flies with counter-rotating coaxial rotors. That’s pretty much along the lines of how an average earth-bound copter works. Ingenuity won’t be competing with Marine One, though, given the fact that Ingenuity’s flights will last no more than three minutes. It’ll fly about 15 feet above the Martian surface, and won’t be going faster than 33 feet per second. But Ingenuity isn’t in business to go fast, or far. The first flights are tests, and as with any technology in a new arena, it’s primarily to be used to gather information, like suggesting where the rover might want to travel next. I’m getting the idea that Ingenuity is Perseverance’s real estate agent. “There’s a lovely view from Gentle Rise 63B, let me show you.”

The mission to get Perseverance to Mars is known as Mars 2020, and is expected to launch next month, and land on Mars in February, 2021. It may seem a long time, but, on average, Mars is 140 million miles away, even though the launch is planned at a time when we’ll be significantly closer. According to Justin Low of the podcast Astrochats, if Perseverance can’t launch within a defined two-week window in July, NASA will have to wait two years before things line up correctly for the seven-month trip. Low‘s podcast is an approachable listen for the layman. He offers a friendly tone without too much nomenclature. When necessary, he explains spaceflight terminology so we can all get the picture.

Scientists believe that the Jezero crater, the spot where Perseverance will land, was, at one time, habitable. The evidence of past life is found in soil samples and rock cores to be collected, these are known as bio-signatures. We’re years away from a return trip from Mars, so the samples collected are going to be on the surface for a long time before we can get them back. Retrieval is a part of NASA’s plan, they’re just not in a place to say exactly when. Whenever that is, there will have to be a least a little air traffic control going on. There are currently six spacecraft orbiting Mars.

NASA’s taking some serious steps to make their work more palatable to the average taxpayer. They held a “Send Your Name To Mars” promotion and received more than 10 million names that’ll be stored on a microchip and travel on the rover. The rover itself was named by the winner of an essay contest, 13-year-old Virginia schoolboy Alexander Mather, who offered Perseverance, and Vaneeza Rupani, an 11th grader from Alabama named the helicopter Ingenuity.