How Bad Is the Trump Situation? 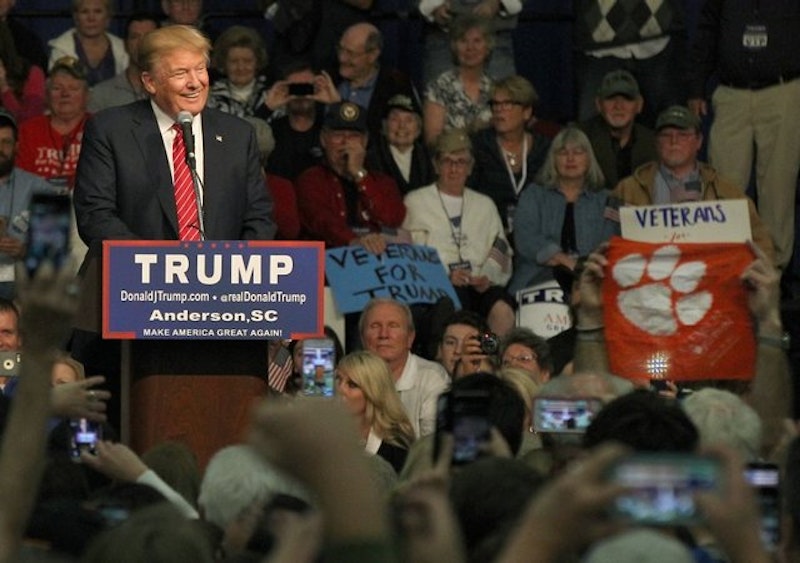 First, we can hope. After all, the late deciders broke against Donald Trump, not for him. His victory percentage of 32.5 percent is the lowest of any Republican who ever won a presidential primary in South Carolina, which means for the past 36 years. Even John McCain managed a point higher (all right, 0.8 of a point) back in 2008, and Republicans down South never much cared for McCain. Last time around Newt Gingrich scored 40.4 percent, admittedly with two fewer candidates than this year’s field. Other scores have all been higher than that, sometimes in fields stocked with decent contenders, sometimes in fields cluttered by no-account palookas. And let me underline that last time’s winner was Gingrich, who never came close to getting nominated.

On the other hand, Gingrich is the only South Carolina winner not to be nominated. That leaves eight who were, if you count George W. Bush’s re-election year. Worse, Trump beat his two runners-up, Marco Rubio and Ted Cruz, by 10 points, and together the two senators’ campaigns and super-PACs spent almost 25 times as much on South Carolina ads as Trump. Throw in Jeb Bush’s super-PAC (Jeb’s campaign had little left to spend on its own account) and the multiple goes up to 46.5. Only one candidate spent less on ads than Trump and that was John Kasich, who came in next to last. Let’s note as well that Trump was not endorsed by the state’s governor, by either of its senators, or a congressman. All he had was the lieutenant governor.

Trump won all but two of the state’s counties, he won voters aged 45 and up, and he won evangelicals, self-described moderates and voters who say they’re “somewhat conservative.” South Carolina is pegged by political observers for its military bases and many veterans. A week before the vote, Trump told a South Carolina debate audience that the Republicans had botched things the last time they looked after war, peace and national security. This may have hurt him, given his relative failure with late deciders. Even so, he won veterans and members of the military by 10 points.

The next state coming up is Nevada, where Trump polls double what Cruz and Rubio poll. Then a dozen states on March 1, half of them in the South. Trump’s been campaigning in the South since at least August, when he gathered 20,000 or so people at a rally in Mobile, Alabama. People wondered why he was pulling such a stunt when the first contests were up north. Turns out he was planning ahead. (Alabama is, of course, one of the March 1 states.)

Of the other candidates, Bush is gone, Ben Carson is a dodo and Kasich is Mr. Hugs. Cruz is counting on evangelicals, but 72 percent of the voters in South Carolina were evangelical and look what it did him. Rubio is rapidly shaping up as the party establishment’s chosen one, but there’s only so much an endorsement from Mitt Romney can do. Dynamic young Rubio snagged the endorsement of dynamic young Nikki Haley, South Carolina’s governor, and only about a quarter of the voters cared that much. This may have been enough to lift him a notch over Cruz for a (barely) second-place finish, but he’ll need many notches to overcome Trump. Wise heads say endorsements indicate who’s going to win a party’s nomination. This year, so far, it doesn’t seem like it.

Two factors remain to be considered. Trump’s childish emotional instability always leaves open the chance that he will storm out of the Republican Party if he encounters any setbacks. On the other hand, general evidence points to the non-existence of God or of any kind of cosmic justice for living beings. This absence is bound to favor Trump.