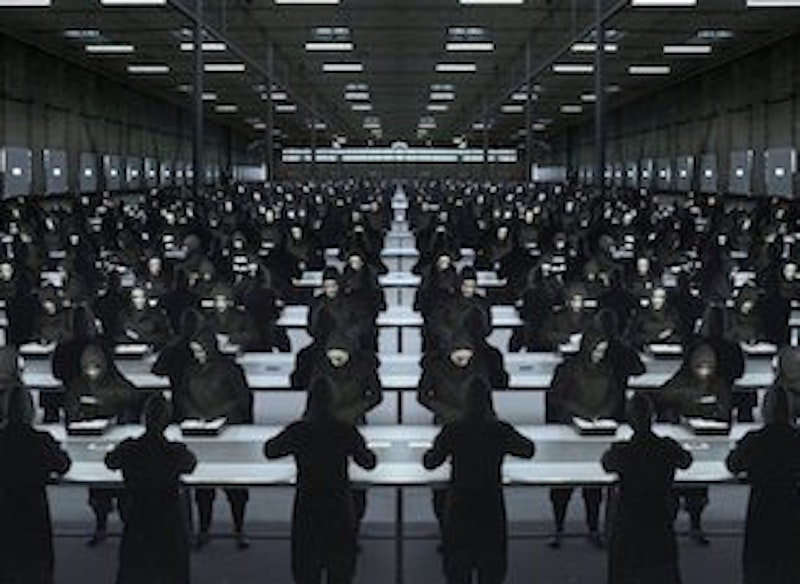 The most thoughtful sci-fi writers on the scene admire slime mold and communism. Or at least, one might get that impression from a panel gathered at the Ford Foundation Center for Social Justice last week, organized by the Slate section called Future Tense, which posts both sci-fi and science essays.

Future Tense editor Torie Bosch moderated the panel and said she has largely banned Black Mirror references and murderous robots from Future Tense while worrying that dystopia has become a crutch. The panelists want something more visionary, and they all seemed to assume that should mean something left-leaning. I attended in my Alien-inspired Weyland-Yutani Corporation t-shirt.

Panelist Emily St. John Mandel, a Canadian turned New Yorker, will shortly see an HBO Max series made from her novel Station Eleven, which is unrelated to The State’s sketch about “The Bearded Men of Space-Station 11” and depicts a Shakespearean acting troupe carrying on after the apocalypse in multiple timelines, exactly as literature majors everywhere hope will happen, even if the engineering majors didn’t survive.

She notes that although U.S. and Canadian sci-fi keeps revisiting the apocalypse, her mom was convinced the world was about to end back in the mid-20th century, living in tranquil British Columbia, and plainly we’re still here. More immediately relevant, she suspects, are the surveillance-state nightmares of recent British sci-fi, born of the country with the most surveillance cameras per capita.

Panelist Ken Liu has a prescription that would surprise most people worried about dystopias and surveillance states: He thinks we need to become much more skeptical about the value of “individuality,” especially given the potential for loners to use technology for terrorism.

This view may be unsurprising coming from a man born in China who criticizes online trolling culture. During the panel, he praised Ursula K. Le Guin’s novel The Dispossessed for urging the reconciliation of individualist and collectivist cultures. However, this line of thinking should trouble anyone who recalls that explicitly anti-individualist political philosophies murdered some 300 million people (about a 10th of the human race at the time) during the 20th century, with the most prolific of all mass-murderers of course being China’s Mao. Isn’t there a hip sci-fi story or empathy-boosting moral lesson in that?

I say we give this individualism a few more tries before resorting to the more murderous path of collectivism. (Another work of art depicting the individual/collective clash that you might like is this rap video from the American Institute of Economic Research about a hypothetical argument between Karl Marx and Ludwig von Mises.)

I give Liu credit for telling the crowd that one lesson from overseas they might not like is that most people outside the U.S. don’t care much about environmentalism, especially any version that urges them to remain impoverished agrarians instead of striving for high-tech First World lifestyles.

Dan Grushkin, co-founder of the DIY bio lab called Genspace in Brooklyn (partnered now with numerous open-access community bio labs around the world), not only worries that dystopia is an overused fiction mode but worries his own biology community has inspired a fair amount of dystopian fiction lately. Faced with what he and seemingly all the panelists see as the rising darkness of the Trump era, he takes more comfort in the optimism of stories such as Star Trek: The Next Generation and The West Wing.

Yet drawing upon his biology background, he also said he sees among biologists, sci-fi-writers, and social democracy activists alike a rising admiration for slime mold, of all things, since it’s a heavily-networked collaboration of partially-individual, partially-collective organisms. The other panelists appeared to share his enthusiasm—and weren’t even put off by hearing about the influence of slime mold on the Afro-futurism subgenre, which I suspect is an analysis of influences that a more right-wing writer couldn’t get away with. If I wasn‘t tempted to write bio-themed dystopian political fiction about the dangers of the left before, I am now, before we are all absorbed. Please mark this career-altering moment.

Panelist Mark Oshiro, a tattooed gay Latino grateful that sci-fi finally features some characters resembling him, is working on a story about jumbled memories and how even something as amazing as the power of mind-transference would likely get mired in boring bureaucracy, as I think we can all agree. Still, there would be moments of wonder amidst it all, and he described a moment in which a lesbian protagonist is projected into her grandmother’s body and memories and feels heterosexual attraction for the first time.

Ironically, though, he may be best known for a book that went from sci-fi to a non-sci-fi novel about contemporary life, Anger Is a Gift. Working on kids’ lit and with real kids, Oshiro says he found many kids losing interest in dystopia fiction such as Divergent because between school lockdowns, hyper-militarized live-shooter drills, and omnipresent metal detectors, they feel as if they’re already living those dark visions. It’s no longer exotic enough to excite, so he may as well put some of those sorts of stories in the present-day real world. That makes him a bit sad, but sounding like St. John Mandel, he admits neither Y2K nor the Afghan War ended us, and the next social or scientific phenomenon to terrify us probably won’t either.

Under questioning by Grushkin that Oshiro likened to therapy, he admitted he started Anger Is a Gift as sci-fi mainly because that seemed like a safer, more abstract space in which to deal with some alarmingly relevant social issues. Eventually, he found the courage to place those issues in the real world.

The real world isn’t all bad, and he concluded on the optimistic note that Brazilian sci-fi, in particular, has gotten very good lately at capturing radical contrasts (of a sort rarely seen in U.S. sci-fi but often seen in everyday life in Brazil) between the paradisiacal and the ultra-urban, the impoverished and the high-tech. It’s a complex world. They’re all complex worlds.