The opportunistic Republican has stooped to a new low. 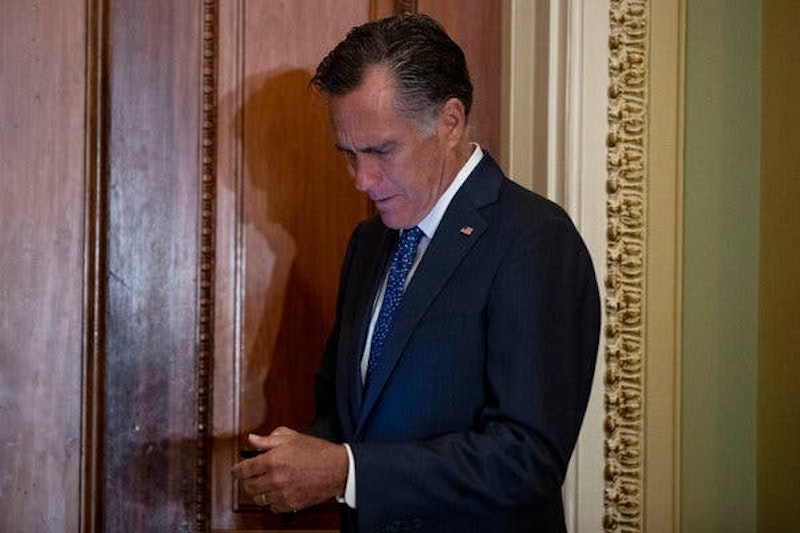 Over the weekend, Utah Sen. Mitt Romney admitted what many, including Slate, suspected: he had a burner Twitter account to say nice things about himself and criticize Donald Trump. In doing so, he once again showed why he can't relate to the American people, and that he's really bad at using the Internet.

The account named Pierre Delecto followed over 700 people, including most of the 668 people Romney follows on Twitter. His first follow on the account was his son Tagg and it follows a bunch of little-known Romney staffers. If the Republican wanted to stay anonymous, he did a terrible job concealing his identity. The account's 10 tweets were what one would expect Romney would say with a fake name online. Here are a few examples.

When Daily Caller called Romney an unreliable ally to Trump, Pierre heroically tweeted at Fox News analyst Brit Hume, "loyal to principle trumps loyalty to party or person, right Brit?" Defending Sen. Romney's character to CNN's Soledad O'Brien in May, he tweeted, “only Republican to hit Trump on the Mueller report, only one to hit Trump on character time and time again.”

And when tweeting at someone who was angry about Trump's decision to leave Syria, he wrote, "John, agree on Trump's awful decision, but what could the Senate do to stop it?" Imagine if Trump did this: he'd rightly be called insane egomaniac. The situation sums up Romney: he's a stereotypical political hack. Romney’s critical of Trump sometimes, but it’s telling that he had to make a fake Twitter account to convey his real thoughts—and praise himself.

Romney calling himself principled is laughable. The one-term Massachusetts Governor was a completely different politician from 2003 to 2007 than he was in his 2008 and 2012 Presidential campaigns. His constant flip-flopping rivals Trump, a registered Democrat from 2001 to 2009, who was praising single-payer healthcare (not just universal) four years ago and essentially paid the Clintons to show up to his third wedding, as one of the least principled politicians in America.

According to Politifact, Gov. Romney was pro-choice. He made the 1994 federal assault weapons ban permanent in Massachusetts in 2004. His healthcare plan was the precursor to Obamacare. And he raised taxes and spending; as a presidential candidate, he signed a no new tax pledge. That's not to say he was completely right or wrong on all of these, but rather he says and does what he thinks he’s supposed to say rather than what he believes would be best for the country.

That’s the reason why the top definition for Romney on Urban Dictionary reads, “To change your position in order win favors or votes.” Then, the example reads, "She told Jane she hated Madonna. The she pulls a Mitt Romney and tells me she loves Madonna."

Not only is it hard to say what he personally believes (like Hillary Clinton with her public and private positions), but his relationship with Trump has been this: Romney "stands up" to him when he doesn't need him and when he needs him, he’ll gladly take help.

Even though his political views have shifted, Trump has been Trump for a long time. Romney accepted an endorsement from Trump in 2012, a man who repeatedly and wrongly said Romney's opponent Barack Obama was born in Kenya. He allegedly didn't vote for Trump in 2016 but shortly after the victory, Romney was at dinner with Trump trying to schmooze his way into a Secretary of State position (he didn't get it). And he accepted Trump's endorsement in his 2018 Utah Senate run after moving across the country to find a Senate seat he could win (like when the Clintons bought a house in New York despite being millions in debt); remember, this was after the highly-principled Romney lambasted Trump's response to Charlottesville and the far-right terrorist attack which occurred there. Apparently, it wasn't all that important for him.

Romney has every right to knock Trump; the majority of Americans agree with him. However, he’s never appeared principled over the course of his career—on Trump and on policy. Nine months into his Senate tenure, Romney has no notable accomplishments despite thinking he should’ve been elected president seven years ago.