The Limits of Left and Right

If voters are tired of the political spectrum, Andrew Yang’s got a notable advantage. 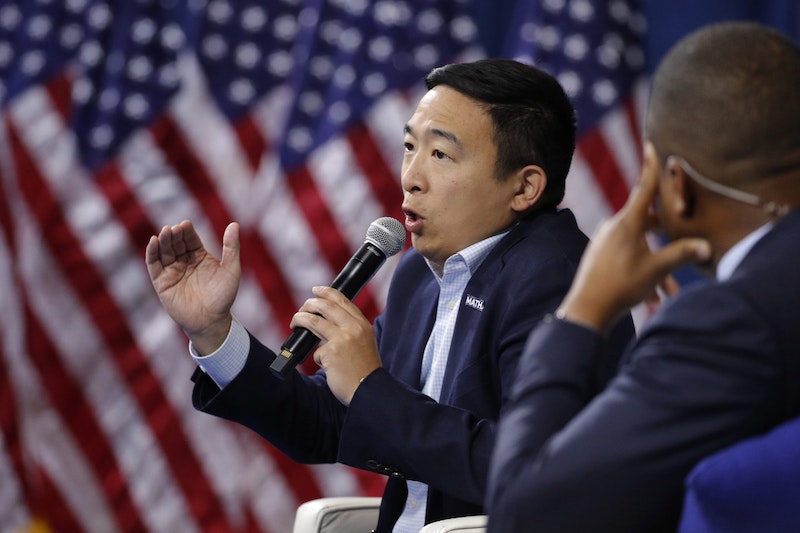 What are left and right in politics? The terms of the political spectrum are ubiquitous but fuzzy in their definitions and application. At the same time, self-identified members of left and right frequently despise each other. Plus, political allegiances often seem driven more by fear of the other side than by an affinity for one’s own. All of this might make for some opportunities, including in the 2020 presidential election, for politicians who can make a plausible claim to be departing from the left-right dichotomy.

The terms, as many know, date back to the French Revolution and its aftermath, with supporters of monarchy seated on the right side of assemblies and supporters of revolution on the left. An enduring definition in France has been that the right is the “party of order” and the left the “party of movement.” To me, that doesn’t capture any number of situations in which right-wingers are calling for some radical change, or left-wingers are defending a status quo.

A modified definition, which I tinkered with a decade ago in an article at FrumForum, is that the right basically seeks to promote something linked to a real or imagined past, while the left advocates some new arrangement (that may or may not yet be in place) seen as breaking away from a benighted past. This too, though, doesn’t quite capture some possibilities, such as left-wing sympathies for presumed communal societies of the distant past, or libertarians mixing techno-utopianism with nostalgia for eras of relatively limited government.

One might be tempted to go with some other definition, such as that the left stands for collectivism and the right for individualism, or that the left nominally favors some type of equality while the right believes some form of flourishing would be hindered by such insistence on equality. These, however, are open avenues for continued arguments as to what the underlying terms mean, and for complaints that they are being used tendentiously.

Ultimately, a key and perhaps defining element of left and right is that they don’t like each other. Jay Nordlinger, in a recent National Review essay headlined “What Unites the Right?” suggested that what reliably makes for a right-winger is being anti-left. I find that more compelling than the policy stances (such as being against abortion and in favor of energy exploration) where he perceived a unifying theme among diverse right-wing groups.

I’m struck by the degree to which support for President Trump seems to depend on antipathy to the Democrats. This often takes the form of what’s come to be called “whataboutism,” in which some putative misdeed by, say, Hillary Clinton is invoked as a response to whatever critical point against Trump is being made. This is a right-wing equivalent of a campus leftist retreating to a “safe space” where offending assertions require no counterargument.

In the 2016 campaign, Trump derived some of his support from perceptions that he was a pragmatic businessman not beholden to the conservative positions and interest groups that dominated the Republican Party. This will be a difficult theme for Trump’s reelection campaign, as his departures from conventional GOP ideology now mostly include erratic foreign policy decisions that raise concerns about incompetence and corruption.

The Democrats, meanwhile, face the conundrum of how far left to go: a progressive candidate who excites the party’s base, such as Elizabeth Warren or Bernie Sanders, or a centrist one who may have broader appeal in the general election, such as Joe Biden. Alternatively, it may be an effective strategy to choose a candidate who’s hard to place on the left-right ideological spectrum, in hopes of holding the Democrats together while confounding Republican attack strategies that have been honed for a more conventional opponent.

Arguably, several Democrats have tried to be not easily pigeonholed, including Pete Buttigieg and Kamala Harris. But the candidate best suited for that unconventional role is Andrew Yang. A universal basic income, his centerpiece proposal, is an idea that has had adherents across ideological lines over the years. His presentation as genial tech executive who’s worried about the effects of automation is hard to fit into any of the above definitions of left and right.

Moreover, Yang recognizes this as an advantage, deploying such rhetoric as “It’s not left, it’s not right, it’s forward.” His capacity to defuse reflexive right-wing hostility against a Democrat is already evident, as in a recent column by Karol Markowicz headlined “I'm a conservative—and I could live with Andrew Yang as president.” Interestingly, Markowicz closed her column: “And he doesn't seem to hate us. That's the biggest plus of all.”

It’s possible that a large number of voters have had enough of left versus right. If so, the once far-fetched possibility of President Yang is not so implausible after all.