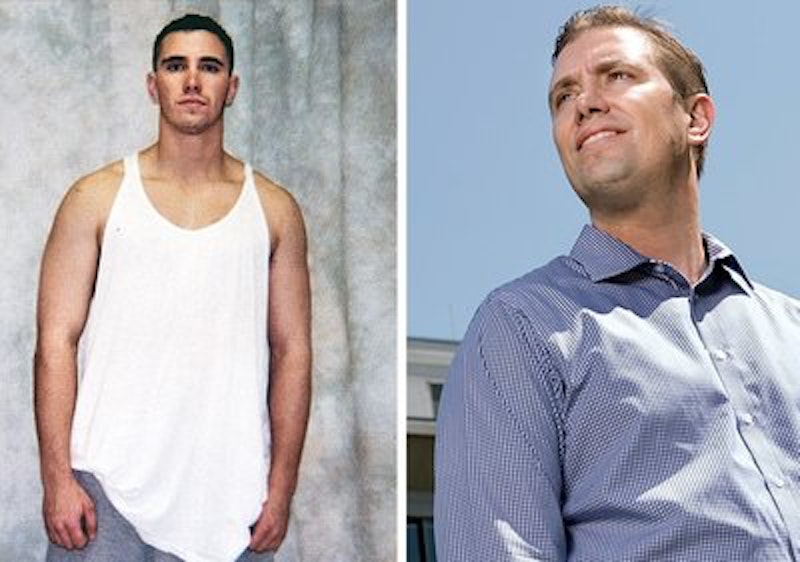 Shon Hopwood, an Associate Professor of Law at Georgetown University Law Center, specializes in criminal law and procedure, civil rights, and the constitutional rights of prisoners. He has a unique perspective on the latter topic, having spent nearly 11 years inside the federal prison in Pekin, Illinois for five bank robberies that he committed in his early-20s.

Before passing the bar exam years later, Hopwood wrote briefs for other prisoners throughout the nation. He had two petitions for certiorari reviewed by the U.S. Supreme Court. The odds of an indigent prisoner serving time for a felony rap doing that just once are about one in 10,000 according to Seth Waxman, the former Solicitor General of the United States who agreed to argue one of those cases. Hopwood’s been called the greatest jailhouse lawyer in American history.

Born in 1975, the jailbird-turned-professor grew up in David City, Nebraska, where he was known as a good kid from an upstanding Christian family and a high school basketball star. After dropping out of college after one semester, he did a two-year stint in the U.S. Navy. Adrift after mustering out of the military, he found himself living in his parents’ basement, shoveling cow manure on a local farm for a living. That's when he hatched a plan with a buddy to rob a string of local banks.

Hopwood’s big break in prison was securing a position in the law library, where he showed a unique ability to decode court decisions. Serious prison time rarely does a person any good, but the future attorney both discovered a rare talent that would culminate with a successful new career and gain the affections of his future wife, who corresponded with him by letter. The ex-con returned to college after his release, and later received a J.D. from the University of Washington School of Law as a Gates Public Service Law Scholar.

Hopwood’s hard fall early in life followed by redemption is riveting, but it's not the end of the story. Hopwood’s dedicating his professional life to fixing the federal criminal justice system. The United States has five percent of the world’s population and 25 percent of its prisoners, and its recidivism rate is alarming. At the heart of Hopwood’s thinking on criminal justice system reform is his belief, supported by substantial research and his own experience as a convict, that long sentences don't work. The “tough on crime” rhetoric employed by politicians may have an appeal to their constituents, but it's just empty words. Would-be criminals, when pondering the commission of a crime, consider the chances of getting caught, which they underestimate, not the length of the sentence.

While it's generally accepted that society has little choice but to put people who do harmful things to others in jail, few can actually argue this point cogently. As Hopwood has noted, prisoners often have their families and community ties diminished while in prison, meaning that if they lose their job after being released the odds are they'll return to a life of crime. As the length of their sentence increases, the chance they'll ever be able to reform diminishes.

As for federal mandatory minimum sentences, Hopwood points out that the authorities say they need them to get people to plead guilty, but that too many people—more than 90 percent—are pleading guilty. The sentences are so long that even innocent people are afraid to risk them, deciding instead to play it safe and take a plea deal for a reduced sentence. The right to a jury trial is spelled out in both the Constitution and the Bill of Rights, yet many are effectively being deprived of them.

Nobody runs on the platform of being smart on criminal justice issues. Richard Nixon sounded tough when announcing his War on Drugs in the 1970s, but decades of fighting it with billions of dollars has yielded no results. Humans are averse to reason on certain issues. Using prison as a first response rather than a last resort is another example of this anti-intellectual tradition.

Hopwood advocates for concentrating on what improves society, not making law-abiding people feel good, as incarceration seems to do. Train people at jobs so they have other options to crime. Rehabilitate drug users so they can break their self-destructive pattern and live a straight life. Texas has recently closed some of its prisons and decided to focus on more rehabilitation. The fact that the crime rate then went down indicates a more enlightened approach is in order.

Hopwood has pointed out the irony of saying we're the land of liberty while there are 5000 statutes on the federal books and we’re incarcerating a greater percentage of our citizens than almost any country—about 2.2 million people. As he put it, ”We know that people can change, so why do we assume prisoners can't? And if the answer is because they're serving time in prison, than that says more about our system than it does about them as individuals.”

A Pew study found an overwhelming number of Americans support criminal justice system reform, yet little progress is made. People don't understand what a disaster the system is unless they experience it personally. The message prisoners get every day is that they're garbage and will never be successful. Hopwood was lucky that he had an aptitude for the law, plus the support of a former Solicitor General. He likely realizes that is life was improved by doing hard time, but he also knows how rarely that happens. This is a person people should listen to.