Or, mourning, depending on your point of view. 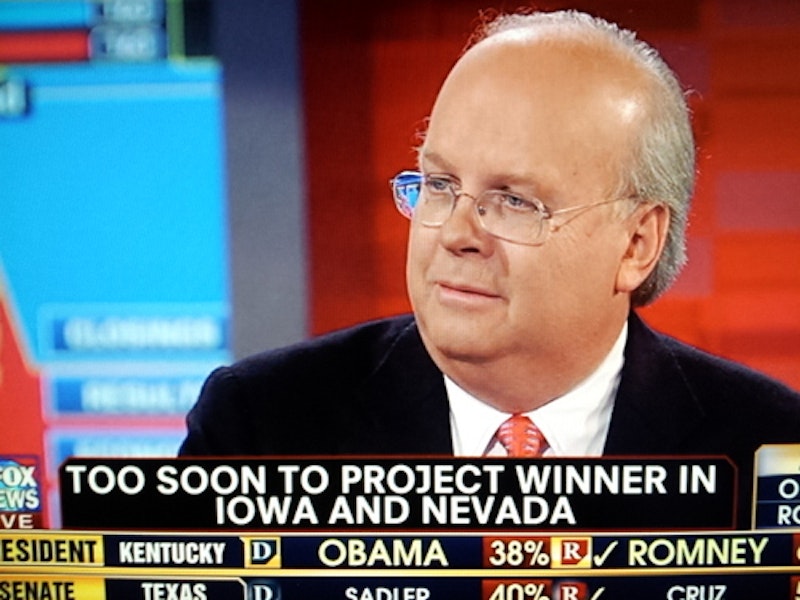 Bill O’Reilly had a rare moment of clarity last night: “The white establishment is no longer the majority.” And with that, he sent a sub-nation of aging paranoid wrecks suspicious of Kenyan Sharia Socialism, abortions, and the black guy who bags their groceries at Walgreens further down a rabbit hole of denial and cherubic ignorance. There was no better election coverage last night than FOX’s, where they were already entrenched in the Acceptance stage of grief by 10 o’clock. Trust that they were back to full-blown denial when the writing was on the wall, as Bret Baier referred to O winning Ohio, and thus the whole bag, as a “major setback” for Romney. I’ll say! The ensuing sadness was truly a sight to be seen—Karl Rove crunching Ohio numbers in vain, only to be gloriously shown down by FOX’s actual number crunchers; Megyn Kelly, looking she just got uninvited from a wedding, blathering on about the GOP House still having a “mandate” to be obstructionist dicks; and best of all, Baier, Shep Smith, and Brit Hume, incredulous at their colleagues’ denial, trying their best to maintain a sliver of credibility enmeshed in a cesspool of childlike ignorance. And who could forget Megyn Kelly wandering aimlessly around a hallway as crewmembers looked at her with contempt? This was Must-See-TV.

It really feels like Morning in America. Obama bested Romney, who will go down in history not only as a loser, but as an archetype of the dishonest, incompetent, self-interested, amoral politico; Elizabeth Warren wins a Senate seat in MA; Tammy Baldwin, the country’s first openly gay senator, is elected in Wisconsin; marriage equality passes in MD, MN, WA, and ME; every single Republican rape idiot lost, and pot was legalized for recreational use in Colorado and Washington State. The writing is there: the country is driving leftward, and with every aging FOX acolyte that dies off, another voter comes of age that isn’t scared, intimidated, or uncaring of blacks, Latinos, gays, female sexuality, or harmless soft drugs. Everyone with a brain has been saying this since Obama won the first time, and they were never wrong. What gave everyone pause was how vociferous and feverishly intoxicated with hate the right was with our first black president.

Obama’s first four years were immensely depressing for anyone interested in politics. I remember checking out of the day-to-day news cycles for a year between 2009 and 2010. When I came to again around the time of the Healthcare fight, I couldn’t believe how insane the right sounded and how they were blatantly pandering to their most racist and ignorant constituents. Birthers, Kenyan Socialist Communist Sharia Law with Barack Hussein Obama, Drudge, Hannity, and Tucker Carlson’s daily stream of minority fear-mongering. Sheldon Adelson, Newt Gingrich’s former sugar daddy, wasted tens of millions on candidates that all lost. And maybe best of all was watching clueless Romney supporters reacting to O’s practical landslide as if they were sure Romney would not only pull through but thwok the President. “I am shocked, I am blown away,” said Joe Sweeney, of Milwaukee, Wisconsin. “I thought I had a pretty good pulse on this stuff. I thought there was a trend that was going on underground." “We were so convinced that the people of this country had more common sense than that,” said Nan Strauch, of Hilton Head, South Carolina. “It was just a very big surprise. We felt so confident.” This is what happens when you have an echo chamber of distortions and primitive social baiting that the majority of your voters take as gospel. No wonder they were just as flabbergasted as Kelly and O’Reilly last night. Even they bought into the bullshit.

They should have seen the writing on the wall in 2008, to shift away from the hard right and cater to the center and jettison every wacko social and religious issue. That would’ve made a statement! Because there really should be a sensible Republican party with candidates and campaigns you can respect and not exclusively mock. This is what happens when a political party gets intractably stubborn and digs its heels in like a spoiled child. Obama’s win in 2008 was a wake-up call to the ultra-religious, socially regressive, and economically ignorant sect of the GOP that their days could be numbered. They conjured tall tales of European socialism, communism, death panels, God’s mandate, without ever proposing a coherent plan for the future. The last four years of radical opposition to the President were torturous for anyone with a brain, regardless of your affiliation. It was obvious that these creeps were going all in with “he’s a black guy wink, and maybe not from here,” and boy did it fail spectacularly. Thank fucking Allah. I wish there was a hell just so Todd Akin could rot in it.

How long until we have our first Atheist congressional candidate? A gay presidential nominee? Federal legalization of marijuana? Legitimate climate change policy? A Democratic party that actually leans left? It’s all looking a lot closer than it did yesterday, and I, for one, can’t wait to see every ignorant Republican fucker die off into oblivion as the world moves on, without them.