Attorney General William Barr is right to think that antifascism is a threat to himself and everything he holds dear. 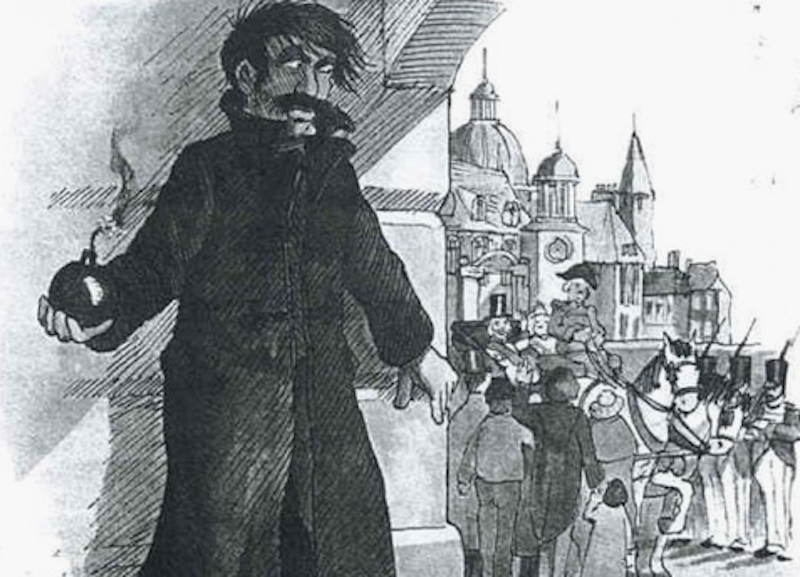 Donald Trump has taken to blaming, threatening, and hyping anarchists, as in his Tweet gearing up for his rally in Tulsa last week: "Any protesters, anarchists, agitators, looters or lowlifes who are going to Oklahoma please understand, you will not be treated like you have been in New York, Seattle, or Minneapolis. It will be a much different scene!"

Meanwhile Attorney General Bill Barr has convened a "task force" to battle "anti-government extremism." "Some pretend to profess a message of freedom and progress," he said in the announcement, "but they are in fact forces of anarchy, destruction, and coercion." He singled out the "Boogaloo Boys" and "antifa," from the right and left wings respectively.

We anarchists make good bogeymen, and good boogie men too if you sit us down at a piano. We’re the preternatural other of Bill Barr. The order and rule of law to which Barr is personally committed amount to the claim that the president of the United States cannot be indicted. Or, by “order,” Barr just means “tyranny”: which he rightly views as the opposite of anarchy. It's ironic that for Barr, "order" amounts now to rule by Trump, which even Barr might’ve noticed is pretty darn chaotic. He might want to keep the National Guard in Lafayette Square in case he needs to subdue the Boogaloo Boy in the White House.

In the late-19th and early-20th centuries, anarchism—which might be defined as opposition to the existence of government, that is, as anti-government “extremism”—had broad support all over the world, especially in the radical labor movement. For a variety of reasons, everyone came around to statism or even flatly to totalitarianism: the whole left lurched toward Marxism, and Marxism, as the anarchist Mikhail Bakunin insisted, is a "cult of the state." On the right end people arrived at anti-statism through an endorsement of individual rights and free markets. But by 1930 all that seemed to remain of the left-right spectrum was dictatorial communism against dictatorial fascism. The Bill Barrs won, in other words, and if there’s one consistent development in world politics ever since, it's the continual growth of government power and control of resources.

Anarchism, I admit, largely discredited itself, boogieing its way to bogeyman status. "Anti-government extremists" killed King Umberto of Italy, Spanish Prime Minister Antonio Cánovas, and American president William McKinley. They bombed newspapers and police stations and Wall Street. The figure of the anarchist as a bearded immigrant with a bomb became universal.

Many anarchists (for example the great American feminist Emma Goldman) supported the Bolsheviks during and immediately after the Russian Revolution of 1917, because they proclaimed the same basic values: equality, justice, and the end of capitalist exploitation. By the time Lenin started having anarchists lobbed into forced-labor camps or lined up against a wall and shot, the movement was essentially over. That's how governments win, really: it's all they have in a pinch to preserve your loyalty.

There have been various minor revivals over the decades: for example, in the anti-globalization movements of the 1990s and the Occupy movement in the early 2010s. But since its early-20th-century fall, "anarchy" has been more a symbol used in propaganda, as in Trump's approach, than any sort of viable political tendency. If it's in revival now, as Barr at least fantasizes, it's for compelling reasons: for example, it’s occurring to people that the government operates by violence and coercion. If you actually want to "abolish the police," you also want to abolish government, the power of which rests precisely on various forms of policing. Watching cops operate on cell phone videos is enough to make a lot of young people into anti-government extremists.

I'm assuming that Barr's task force will be taking the same approach to antifa that his hero J. Edgar Hoover took to the Black Panthers: infiltrating them, arming them, and spurring them to take violent actions so that they can be killed or arrested. Admittedly, that's going to be more difficult in this case, because while the Panthers were a fairly tightly-ordered political organization, "antifa" is not an organization at all, but a sort of loose identification among people who are willing to take "direct action" to counter what they take to be fascism. Really, antifa comes out of the wars between fascist and anti-fascist punks of the 1980s and 90s, and has the degree of organization that punks are comfortable with: not much, really.

But I understand exactly why Bill Barr and Fox News are obsessed with antifa. It's not merely a matter of manipulating people by trying to make them feel threatened, though it's that too. More widely, however, Barr rightly concludes that antifascism presents a direct threat to the form of government he holds so dear: the "unitary executive." In Barr, anti-fascism has found an appropriate opponent, and he's right to think that the victory of the antifascists would be a personal disaster for himself.

I’m forming a task force to ferret out and remove threats to the American republic, such as Trump and Barr and the tyranny of pure fuckheads under which we now labor. We anarchists and antifascists are going to send our agents provocateurs to infiltrate and undermine the Department of Justice like a plague of moles, thus compromising the rule of law, just as Barr fears. But maybe he's doing that without our help and we should just lay back and watch the damn thing collapse.