Why Did Boehner Want Out?

An ordinary House Republican shows us. 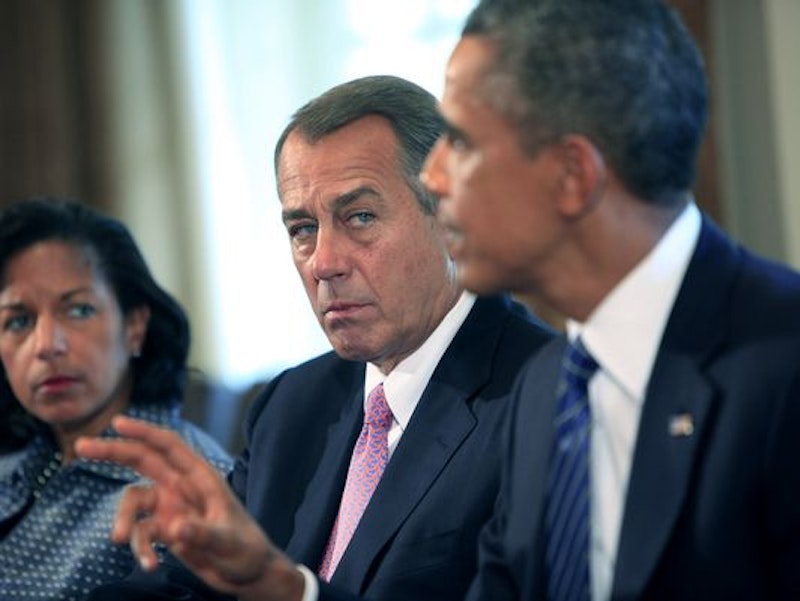 John Boehner talked about his job a little while ago. Being Speaker of the House was not at all simple, he said, and he talked about chess, balancing off protection of the institution and protection of your majority, and then adding in the recruitment of candidates and the raising of money, “which is just as complex.” He also talked about garbage. “Garbage men get used to the smell of bad garbage,” he told Politico. “Prisoners learn how to become prisoners, all right?” Politico said he was “referring especially to the grind of constant travel,” since he spent weekends flying about for fundraisers. “Especially” does some work there. Now that he's quit as Speaker, Boehner leaves behind his fellow House Republicans, 246 people who have given us half a dozen governmental crises in the past four years. I bet that makes a difference.

Consider the following thoughts from Rep. Matt Salmon. Bear in mind that the Arizona Republican is 57 years old and has spent almost a decade and a half in elected office. Like many House Republicans, Salmon thinks the federal government should have no money at all if the alternative is for some of that money to go to Planned Parenthood. That's because of what he believes to be in the recent undercover videos about the group. He decries this “barbaric organization” and “the recent harvesting of organs from these precious, murdered children,” and warns that we must yank the group's money to “ensure America retains its humanity.”

Well, he says that sometimes. A reporter just asked Salmon about the possibility of talks to raise some of the limits on federal spending—not spending on Planned Parenthood, just spending in general. The Congressman said he was very much against such talks. But here's how he put his view: “Everybody has been kind of focusing on the Planned Parenthood issue, which I think is incredibly important, but I think it’s almost been a ruse to try to shift attention away from the spending caps.” The fight against Planned Parenthood is “incredibly important,” and yet it's this close to being a dodge and a sham.

Bring in that earlier statement and Salmon is looking with leery eyes at the battle to save America's humanity. Apparently the struggle takes attention from his real, real top goal, which is to keep outlays down. Maybe if he’d been asked about the two issues in reverse order, spending caps first and then Planned Parenthood, the caps would have been almost a ruse (though “incredibly important”) and defunding Planned Parenthood would have been the crucial business that was being distracted from.

What it all comes down to is that one issue is the Apocalypse, and so is the other issue, and two apocalypses side by side tend to jostle each other. It's tough to fit them both into your head. Salmon resolves the strain by deciding that someone is jerking him around. No, not really jerking him around. Kinda sort of. Some unspecified entity is practicing “almost a ruse,” he says, and then he lets the matter slide. Adults normally work out priorities and see how they fit within circumstance. Salmon says screw that. He settles for feeling like some force is up to something no good. If it weren't, his head wouldn't hurt.

Boehner is playing chess on this board and that board, balancing institution and party. “It’s my job to look out over the horizon, make sure I know where we’re going,” the Speaker said once. “And to make sure the team is working together.” But there is no team, just a gaggle, and its members don't know from horizon. They want what they want. If they don't get it, somebody bad did a bad thing. They're all celebrating Boehner's departure because they figure he must be the bad man who didn't repeal Obamacare.

These are the people today's conservatives have chosen to represent them. Grown men and women! How will it end? In tears, I think.