Dr. Robi Ludwig Wants You to Fear the Gays

Was Elliot Rodger gay? Does it even help to ask? 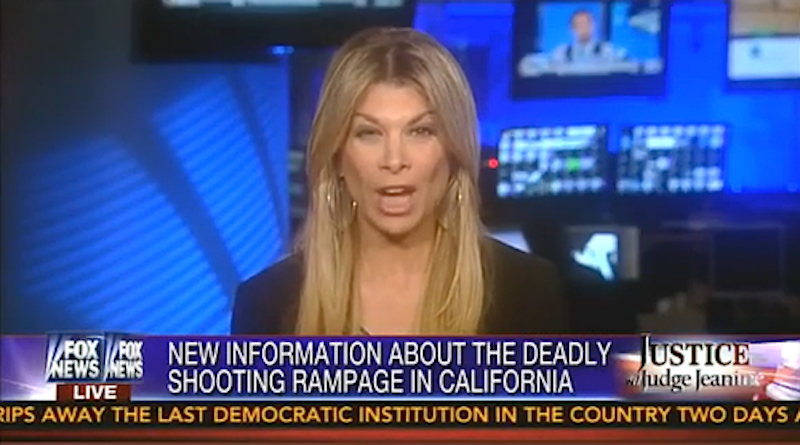 Speculation about why Isla Vista massacre suspect Elliot Rodger committed the rampage has saturated the media and trickled into theories that range from mundane to absurd. Fox News correspondent and “expert” Dr. Robi Ludwig, who recently appeared on Justice with Judge Jeanine, offered her opinion on Rodger, saying, “Oh, he’s angry with women for rejecting him… And then I started to have a different idea: Is this somebody who is trying to fight against his homosexual impulses? Was he angry with women because they were taking away men from him?” she said. “But this is a kid who couldn’t connect, and felt enraged, and wanted to obliterate anyone that made him feel like a nothing.”

What’s problematic with Ludwig’s statements is that she is conflating Rodger’s potential homosexual tendencies with an act of grisly violence. Although it’s clear that not every man who stays in the closet goes on a killing spree, Ludwig’s statements hint at something bubbling under the surface of right-wing extremists’ minds: homosexuals still need to be feared. It would’ve been a more thought-provoking argument if Ludwig had any sort of information on the sexual desires of Rodger, or bothered to read his manifesto that highlighted his thought process on the killings.

I will punish all females for the crime of depriving me of sex. They have starved me of sex for my entire youth, and gave that pleasure to other men. In doing so, they took many years of my life away. I cannot kill every single female on earth, but I can deliver a devastating blow that will shake all of them to the core of their wicked hearts. I will attack the very girls who represent everything I hate in the female gender: The hottest sorority of UCSB.

Haunting and revealing, Rodger’s words elaborate on a feeling most men of his age feel in some way or another: sexually repressed. We live in a time where it’s never been more socially acceptable to be an out gay man. The gay rights movement makes strides every day to ensure that the wrongs of years past are absolved; that gay men no longer need to live in fear for who they are. In a paper titled “Therapists Who Help People Stay In The Closet,” psychiatrists who encourage clients who come from extremist families to stay in the closet in order to protect their well-being and psychological stability elaborate on the dangers of being gay in the pre-modern world: “Gay men and lesbians were long subjected to a varied, often horrifying list of ‘cures’ at the hands of psychiatric-psychological professionals.” These included lobotomies, castration, hysterectomy, clitoridectomy, hormone therapy, LSD, sexual stimulants, sexual depressants, shock treatment, aversion therapy and electroshock. That changed, of course, as mainstream attitudes about sexual orientation changed.

It’s sobering to realize that in a matter of decades we, as a society, no longer view homosexuality as a disease, but rather understand it as a continuous aspect of who these people are.

Ludwig’s statements recall a time where gay men were feared by society for their unnaturalness. The only sort of “proof” that could stem from his speculation comes from the book The Velvet Rage, in which author Alan Downs claims that the intense feelings of young gay men stemmed from “the experience of intense anger that results from his failing to achieve authentic validation.” Curious that both Ludwig and Downs latch onto this idea that validation is the root of anger and therefore violent retaliation. As a former angry closeted man, I can attest to this. It’s painful when you feel rejected by the world.

However, I’m not convinced that this is a unique quality of gay men. All humans struggling to understand their place in this world possess it. Ludwig’s claims sting so harshly because she is adding a layer to a conversation that doesn’t need to be there. It’s not healthy to have people live in fear that closeted people may snap. Rodger was certainly sick, but should the media speculate on his sexual orientation? Even if Rodger had harbored a secret desire to be with men, the fact is lives were lost and speculation on his sexual orientation won’t bring anyone back.