“Civility” is a cloak for centrists who believe in nothing and fundamentally do not understand how power works. 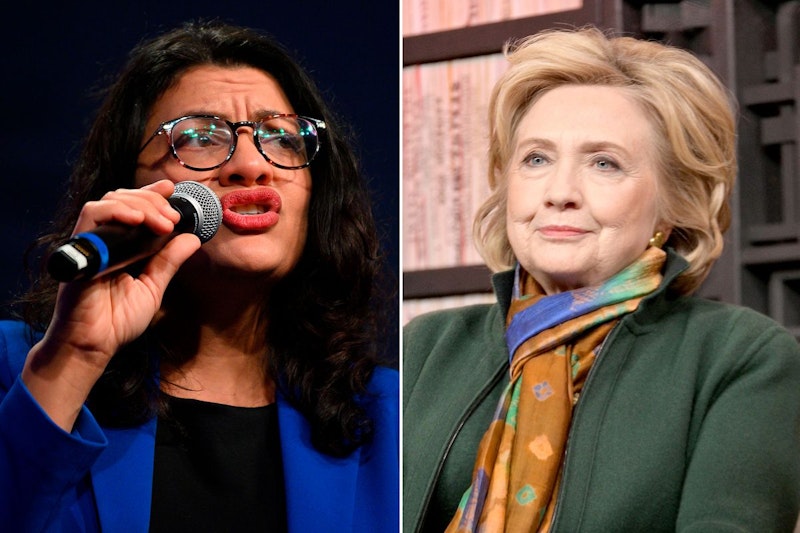 This will be published on Monday morning, so I’ll avoid any predictions on the Iowa caucuses. I’m optimistic and superstitious, but more importantly, anything I say will be rendered irrelevant before the night’s over. A last minute shake-up, like Rashida Tlaib encouraging an audience of Bernie Sanders supporters to continue booing Hillary Clinton on Friday night, feels like it would hold up even less.

But I’m not fixated on the predictably sanctimonious and hypocritical reaction of Clintonites and Bernie Bashers—this was the only slice of red meat they got all year. The DNC waited way too late to stop what has become a social movement. Those that condemn Tlaib—from celebrities like Michael McKean to writers like Amber Tamblyn—surely celebrated her victory in the midterms only 15 months ago. She is, after all, the first person of Palestinian descent elected to Congress—that’s incredible. (Or, as Glenn Greenwald put it, “I do genuinely think it’s an under-discussed story—one that’s quite beautiful—that the only two US Muslim Congresswomen are both vocal and enthusiastic supporters of the candidate who would make history by becoming the first Jewish President in US history.”)

Tamblyn, who called Tlaib’s booing “Trumpian” two days ago, congratulated her along with all the other “Women. In. Power.” in November 2018. Really, this tweet is so thick with the liberal sickness that it should be studied along with recent reactions to understand what’s so demented and infuriating about their thought process: “Last night’s defeats are nothing compared to what we have just won. Black women in power, Muslim women in power, Puerto Rican Women in power, Native American women in power, queer women in power—Women. In. Power. Keep fighting. There’s so much more good to come. #WomenWave.”

David Cross had a better response to the same video: “The replies to this are secure in their vacuum. It's BOOING ffs. Go to any sports event/comedy show/British pub. Also HRC has continually shit on Sanders in a way that one might consider, say, divisive? Good lord these people have the fortitude of damp cotton candy.” He’s right: booing can be a powerful communal experience, whether at a sold-out baseball game or at someone as uncivil as Hillary Clinton, but remember why they’re booing.

By any metric, Hillary Clinton deserves to be booed: for smearing Sanders, for losing to Donald Trump, for authorizing drone strikes that killed innocent people, for smearing her husband’s alleged rape victims, for being the first major politician to weaponize Barack Obama’s race against him, for starting birtherism with this photo in January 2008, even for calling all Trump voters “a basket of deplorables.” One would have to have the patience of a saint to listen to and attempt to understand the most vile caricature of a Trump voter (bigotry on its own is rather boring), and I take it for granted that racism, sexism, xenophobia, chauvinism, and proud ignorance—everything Trump ran on—are deplorable. But Clinton’s arrogant reduction and dismissal of a much broader class division in 2016 America contributed to her loss just a couple of months later.

Hillary Clinton doesn’t deserve “civility,” and I can’t trust anyone that prizes “civility” over substance. Formalities, ceremony, and the performance of politics are all that the Democratic Party has left, because they’ve made it abundantly clear that they stand for nothing. In endorsing two female candidates who have almost nothing in common policy-wise, The New York Times somehow made the most sexist “endorsement” possible. These two people share one thing: a vagina, and may the best one win! Fuck you. Just say you hate Sanders, and that you’d like to see HRC back in the mix, and that you’d rather see Trump reelected than have Sanders win. Say what you want, it’s not hard.

Democrats who speak exclusively in platitudes and defer to power at every turn don’t really want anything to change. There isn’t a meaningful difference between the damage done by Bill Clinton’s crime bill and Trump’s concentration camps. Elizabeth Warren stood and applauded Trump at his first State of the Union, merely out of politeness and routine, something that most people find insane and contemptible. She also voted for his military budget, but remember, she’s only going to hire people approved by a transgendered representative. Once again, fuck you. No one needs a wreath in 2020. People want health insurance, people want meaningful labor, and people want social services.

Tlaib being pressured to apologize by HRC is so despicable, as if she owes Clinton anything. Politicians deserve nothing but our contempt and suspicion, and our automatic response to all of them should be booing and hissing. They’re self-selecting narcissists and egomaniacs, and they’re trained liars. We must always hold them accountable and recognize that the people that seek out these positions are necessarily not like you and me. Who wants to work in the government, much less run for president? I don’t trust any of them, and the only reason I support Sanders is that he’s never had to lie, flip flop, or pretend to be anything that he isn’t. Everyone else at his level has.