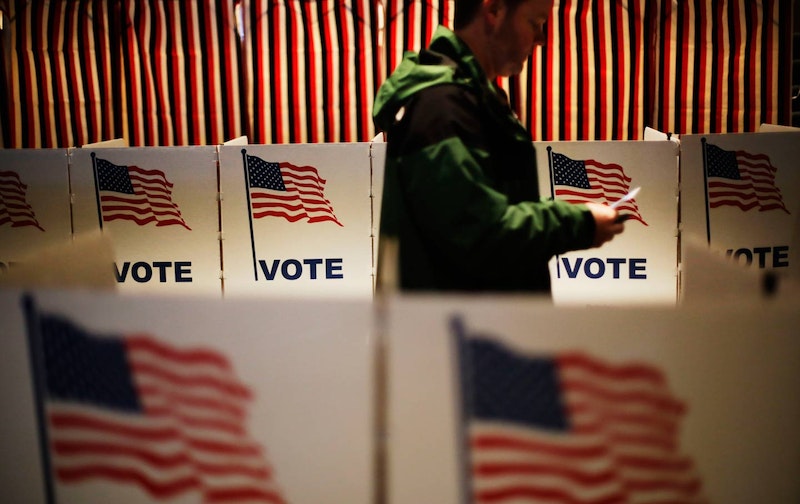 Last week New Hampshire reasserted that it’s broadly demographically and ideologically out of step with the rest of the country. The shout went up, "If it was up to us, we'd be in McCain's second term!" And the rest of the nation backed away slowly.

Why do we let these New England goofballs have such a central role in picking our presidential candidates? The primary season as it's set up gives disproportionate attention to Iowa and New Hampshire—two small states with overwhelmingly white electorates and no major cities between them. It's foolish. Why not instead have a national primary, as Jake Flanagin suggests at Quartz? Candidates would have to sell themselves to all of us, all at once—and we'd shorten the amount of time we had to pay attention to primary politics. Win/win.

Unfortunately, while a national primary sounds like a simple, logical solution, it’s a horrible idea. The purpose of the long primary season is to give voters information about the character, stamina, weaknesses, and constituencies of the candidates. Who can weather sustained negative advertising? Who can reach beyond their base?

Additionally, the long primary season encourages losers to drop out, which means eventually you get the strongest candidates going head to head. Otherwise, a factional candidate with committed minority support could beat several more generally acceptable candidates who split their votes. It’s likely Donald Trump would’ve won a national primary this year; he has a smaller chance of winning in the current system. That's reason enough to think twice about the virtues of radically changing the system.

Along those lines Jonathan Bernstein argues at Bloomberg that any change to the primary calendar is a bad idea, since, weird as they are, Iowa and New Hampshire are known quantities. Party insiders, pundits, candidates, and the public have a lot of information about how Iowa and New Hampshire vote, and about what their preferences do and don't mean. Chris Christie knew that New Hampshire likes moderates like him, so if he could only get seven percent of the vote there, it was time to drop out. Party donors know that Iowa is friendly to evangelical true believers like Cruz, so they aren't suddenly seeing him as a front-runner just because he won that state. And so on. The point of the primaries is to let people gather data about the candidates. Switching the primary schedule would make the data gathering a little more confusing. Why bother?

For the Republicans, I'd agree, it doesn't really matter that that Iowa and New Hampshire are first. Despite the hand-wringing, the order of voting doesn't have that much effect on the ultimate winner of the nomination. That's the whole point of making the primaries such a long haul; it means there’s time for transient surges in popularity to dissipate, and for those with the strongest organizations and appeal to wait everyone else out.  It's a marathon, which means it doesn't matter where you put the start of the course. Nor does it matter if you stumble early on; the best runners can easily make it up later, and the worst were going to be out anyway.

For Democrats, though, it's a different story. Non-whites make up 40 percent of Democratic voters, as opposed to only 11 percent of Republicans. African-American and Hispanic voters are almost a quarter of the Democratic electorate. (http://www.gallup.com/poll/160373/democrats-racially-diverse-republicans-mostly-white.aspx)

As with Republicans, changing which states go first wouldn't have much effect on who wins the nomination. But still, for Democrats, the symbolism is bad. The primary calendar encourages candidates to spend huge amounts of time slogging about rural states in pursuit of white voters. The media, now, at the beginning of the primary season, is focused on this image of Democracy as folksy, quaint, and monochromatic—a nostalgic image of the electorate that has little to do with many of the Democrat's constituents. The organization of the primary makes people of color look like an afterthought, or a marginal concern. That's not the message the Democrats want to send.

Party politics isn't just about practicalities. It's about optics and staging, and who you welcome into your coalition. At the least, the Democrats should move South Carolina up before New Hampshire, so that the first primary state is one in which black voters have a substantial voice. Moving Nevada up before Iowa might be a good idea too. The Democratic Party claims it wants to embrace a changing, diverse American electorate. Its primary calendar should reflect that.