Statuary and memorials are never permanent. 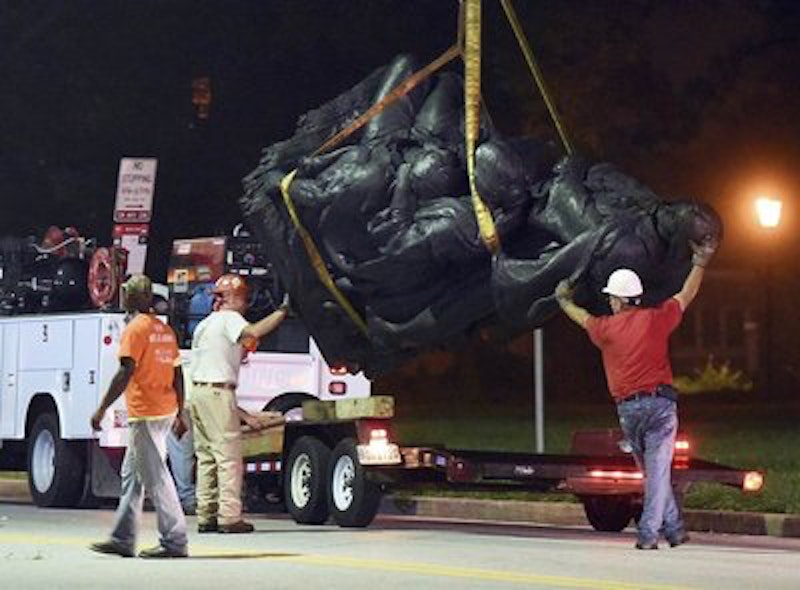 In religion and politics, images such as memorial statues have a particular potency, if also an impassive demeanor that makes them seem relatively innocent. They’re inanimate objects, hunks of metal or stone, and don't themselves mean anyone any harm. Sometimes, of course, they assume the forms of persons who do or once did: dictators, for example, or generals in the Confederate army. By the same token, pulling down a statue can be a powerful symbolic act, but it is not itself an act of violence. Bronze feels no pain.

Between 11:30 p.m. and 5:30 a.m. on the night Donald Trump praised the “fine people” who protested the proposed removal of the statue of Robert E. Lee in Charlottesville, the city of Baltimore removed statues of Lee, Stonewall Jackson, and Roger Taney (the Supreme Court justice who presided over the Dred Scott decision). Reproduced on television and Twitter, pictures of the statues removed under the midnight floodlights themselves exercised a certain fascination. The statues were removed to an undisclosed location, as though they were political detainees.

Politics is often carried on at the level of images, which are laden with intentions, histories, meanings, and relations of power, but which are also relatively easy to alter, replace, deface, or destroy. It’s easier to replace a statue than to address historical or structural injustices. Public memorials are soaked in meanings, conveyed not only in what or who they depict, but in what they are made out of (bronze or marble, for example), where they are installed (by the roadside or on the public square), and what style they display (perhaps the classical “equestrian statue” on a square or boulevard), and by whom they were built and sponsored.

When a new regime takes power, an army wins a victory, a hero achieves something extraordinary, or a martyr rises even in death, images take form and appear in or are imposed on public space. And when the conquering army or revolutionary insurrection marches into the capital, it starts by throwing down the statue of the overturned leader or symbol, whether it's Saddam or Stalin, Hitler or Kim, a pagan god or an enemy flag.

Both ways round, the political and memorial uses of images and architecture, statues and plaques, murals and billboards often resemble the classical struggle between idolatry and iconoclasm, wars conducted on the level of images of the sort that broke out during the Protestant Reformation, for example. Among the most severe of Old-Testament prohibitions is that against worshipping graven images, as Moses threw down the Golden Calf. Putting up a statue of Stonewall Jackson is a political statement as well as an historical one, and it takes power to install such a thing publicly. A program of such installations represents a certain interpretation of history. It tries to establish a pantheon of heroes, saints, or martyrs and to preserve them into or embed them in the emerging future.

The same can be said of the removal of these images, or for that matter, the activity of defacing or toppling them in an unauthorized fashion, as happened recently at the Confederate Soldiers Monument in Durham, NC. Destruction of images, too, represents a rethinking or a reinterpretation of the history of the original monument and what it literally represents. But iconoclasm, like idolatry, also shows the almost preternatural power of images, as the giant body of a Saddam or Robert E. Lee is knocked off its pedestal, desecrated, defaced, destroyed, or hidden away.

If there’s a historical argument for preserving the Confederate monuments, it’s not to retain an accurate picture of the Civil War, for they were for the most part erected long after the cataclysm and embodied a tendentious interpretation of it. The argument would that we ought to preserve the ways that the Civil War, or more widely, slavery, race, the relation of state and federal power, military heroism and military defeat, have been interpreted at different periods, by people with enough power to install something downtown in the traffic circle. Those statues in Baltimore do not reveal much about the Civil War itself; they do reveal something—shameful perhaps, but also important—about the political and racial history of the city.

On the other hand, one might take the approach of preserving the statues in good photographs and in a warehouse somewhere, and beginning the process of deciding upon and installing something else. The monuments themselves are for the most part undistinguished, formulaic, and banal. When people weren't offended or endangered by what it represented, the parade of bearded men on horses on pillars sank into invisibility.

There are all sorts of interesting public art projects or new sorts of memorials or tributes that can go into these sites, including projects that might be less imposed than collaborated on, or might respond to different needs or transformed communities. However, even if we work on the re-install, we should be aware that our own interpretations are not destined for permanence, and that our transformations of public space or historical interpretation are liable to prove, to our successors, as oppressive or limited as that of our precursors may appear to us.

Our idols, like Confederate generals, are liable to be toppled in their turn.

—Crispin Sartwell is the author of Political Aesthetics.