Trump and Palin, the Flapmouth Twins 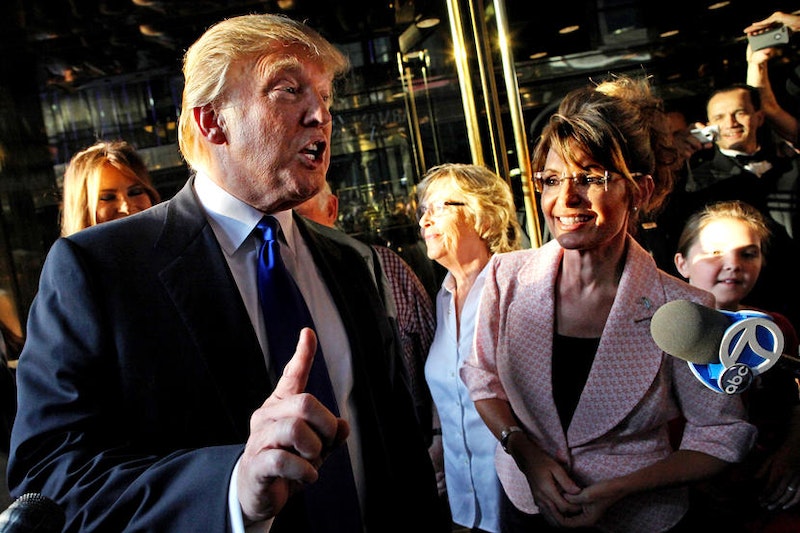 An op-ed at The Washington Post makes a point I’m proud of making two summers ago. The headline: “Trump Is Sarah Palin But Better At It.” Or, as I phrased it back then, the big guy is “what Sarah Palin wanted to be. Trump and Palin both try the same thing when handling the press: they want their answers to provide so much spectacle that nobody cares what the reporter asked. Palin can’t pull it off. Back when people had her on shows, she’d try to burble past a question and get frazzled. Trump breezes past.” I think that’s good, but look what comes next: “Of course, Trump understands what the questions are about.” Oh, of course! That notion died in the months following. I feel silly now.

My rationale at the time: Trump had spent decades dealing with companies and governments, so he had a working knowledge of the issues that show up in the paper’s business section. Apparently a working knowledge isn’t much. One hopes this is so only for those big-time players that start with staggering amounts of inherited capital.

The Post op-ed, by the writer Jane Coaston, addresses the Trump-Palin alignment this way: “Trump campaigned on the Palin model. In fact, he improved upon it. His identity was his trademark, rendering the constant shifts in policy goals and promises almost meaningless.” Admirers didn’t treat Palin as a candidate with beliefs and a record. She was a dream-object that people could vote for, a personality that expressed their personality. Now that particular dream has gone bust, but there’s Trump and he’s doing what Palin did: giving voters “the image, the veneer, the blank slate upon which their deeply held dreams—for themselves as much as their country—could be written.”

I suppose the op-ed and I are attacking the subject from different angles. A candidate who’s merely a vehicle for personality would do a lot of bullshitting. Questions would be treated as set-ups for cabaret. The idea is to go on the TV and be fantastic. Not fantastic at dispensing info and analysis, just fantastic. Something the people at home can look at and hope to be. Then you open your mouth a few times too often and you’re washed up, dying behind the mic in Wisconsin while people check their phones. Or else you’re president.

The op-ed doesn’t go into how these different results came to be. We’re told Trump outdid Palin, which is plain, but not what he did or why he was better equipped to do it. Instead the piece grows large regarding Trump’s future: “His base will not leave him, because to abandon Trump would not be to abandon the current president but to leave behind deeply held beliefs of their own. His popularity is cultural, not political, resilient to the notions of truth and fiction and to Trump’s own failures.” But the same was true of Palin and her popularity, and look what happened there. She made herself irrelevant by babbling helplessly on camera. To return to the point I made up top, Trump babbles but never helplessly. On the other hand, he’s a klutz at governing, and people do notice these things after a while. George W. Bush made cultural sense to his admirers. Then he got his hands on the government and they had to live with the results, which they didn’t like. They dropped him at last and moved on to the next dream. It can happen to Trump, though I bet there’ll be blood along the way.