America's Not Far Away From Book-Burning

Removal of Confederate statuary is for greater good, but wide-scale censorship looms. 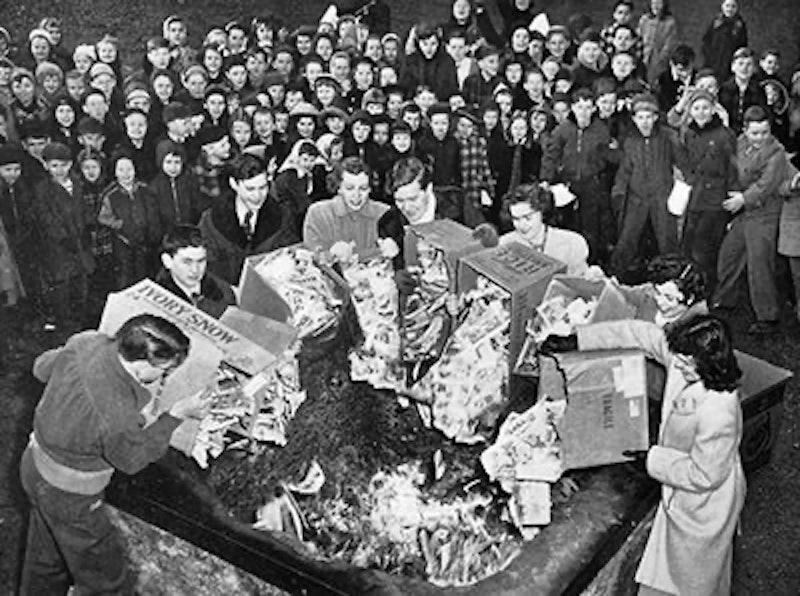 Early in the 20th Century, three major books caused a ruckus in America because they were considered obscene, and only intervention by the courts allowed their publication over the objections of churches, temperance groups and individuals. Today, hardly anyone reads them outside of college literature survey courses as basic examples of the development of the modern novel. They are: Lady Chatterley’s Lover, An American Tragedy and Ulysses. Today, the thrills are cheaper and more vivid on television and online.

In the 1940s-50s, the Catholic Church’s Legion of Decency was a powerful moral and economic force. It viewed, censored and regularly published lists of films that it found morally objectionable and forbade the faithful from attending them under penalty of sin and confession. The Legion made its presence felt and heard from pulpits and encouraged Catholics, and like-minded others, to boycott movies and picket theaters. And nothing stimulated curiosity as well as prurience more than a famous tag-line of the times, “banned in Boston,” one of the most thoroughly Catholic cities in America, then under the thumb of the autocratic Richard Cardinal Cushing. To be banned in Boston was box office gold.

Maryland had its own peculiar method of enforcing state-sponsored standards of rectitude. The so-named Free State established a State Board of Motion Picture Censors in 1916, the last in the nation to be phased out in 1981 after 65 years of raiding theaters and snipping the smutty parts out of films. The Board survived Supreme Court decisions grappling with a definition of obscenity mainly because it was a source of patronage for governors in a very Catholic state. Its final chairperson was the headstrong Mary Avara, who once rented a theater in Annapolis, the state capital, to preview the film Deep Throat to illustrate obscenity for lawmakers who were trying to abolish her agency. The event drew a full house, and the Censor Board survived another legislative session.

As speaker of the Maryland House of Delegates in the 1960s, former Gov. Marvin Mandel (D) was a private-practice lawyer and defender of clients on Baltimore’s randy Block, the city’s erogenous zone of strip clubs and other affronts against piety and proper dress. Late one night, while the General Assembly was in session, Mandel received a call that the crotch cops had shut down one of his clients’ clubs for violating the state’s obscenity laws. Mandel promptly went to night court and had the obscenity law overturned, then just as quickly returned to Annapolis to rewrite the obscenity law to accommodate the Block strippers’ (un)dress code.

East Baltimore’s Patterson Park, the centerpiece of a Polish neighborhood, was, from the 1960s forward, the battleground of violent clashes between blacks and neo-Nazis who had established a headquarters and a bookstore among the rowhouses. And on several raids, police uncovered huge caches of weapons and ammunition. The city of Cambridge, on Maryland’s Eastern Shore, smoldered on and off for three years in a duel between blacks and occupying National Guardsmen over segregationist policies and voting rights. Today, Cambridge has a black woman mayor.

And in Cecil County, as late as the 1980s, the local cell of the Ku Klux Klan regularly staged cross-burnings in the then largely rural county that borders Delaware. But just last week, Georgia’s Stone Mountain Memorial Association denied a KKK application for a “lighting” ceremony on Oct. 21 to commemorate a November, 1915, cross-burning on the mountaintop that marked the KKK’s revival. On Stone Mountain is a frieze, larger than Mount Rushmore and a major tourist attraction, of four confederate generals that the townsfolk must decide whether to remove.

School boards across the South are rewriting history books to minimize, or eliminate, mention of evolution in favor of creationism. Similarly, certain risqué texts are regularly banned from classrooms and removed from school library shelves. Many state legislatures are in denial about climate change despite overwhelming evidence that we’re slowly sinking into the overflowing oceans. And in the South, the Civil War is not a matter of black and white; it’s a regular reenactment magic show in which they win every time.

Only as recently as 1982 were Maryland’s ancient blue laws repealed to allow Sunday store openings and sales, mainly at the urging of the merchants at the newly constructed Hunt Valley Mall in Baltimore County. A former attorney general for Maryland, Francis B. Bill Burch, went before the Supreme Court to argue an obscenity case, the precise legal definition of which has eluded justices for decades, if not centuries. Pressed for a definition, his Thesaurus not handy, Burch wriggled and writhed, parried with the justices, and finally blurted out: “I know obscenity when I see it.”

And so it is with monuments. They, too, are in the eye of the beholder, just as books, films and the ladies in pasties and other obscenities. Individual impressions aside, there’s also a higher standard of judgment other than taste or discernment, and that is objective value—what do they actually contribute and what is their worth to a community.

Change often comes as slow as evolution. We live in a world, like it or not, of contemporary community standards. We are constantly adjusting our attitudes, often in the name of progress, occasionally in spiteful defense of regress. Moral and immoral, right and wrong, good and evil, never change. Attitudes toward them do—constantly. And so, communities and societies as a whole adjust, either by fiat or drift, to accommodate shifting behavior or grudging acceptance.

The monuments were a threat to a peaceful city just as the likeness of Robert E. Lee brought riots, death, ugliness and disgrace to the college town of Charlottesville, VA, and a failure of moral leadership on President Trump. Trump’s incendiary rhetoric and open encouragement of violence have unleashed a revival of defiant racist acts across the country. Cities are taking speedy defensive action to avoid violence. Trump’s divisive language has accelerated the dismantling of confederate statues as much as any protest.

There are, by one reported count, an estimated 718 confederate statues across the country, most of them strung through the South. An estimated 78 have been removed. The U.S. Capital Building’s Statuary Hall is filled with marble tributes to confederate heroes, as was originally allowed. And again, in Maryland, Republican Gov. Larry Hogan, in a reversal of his earlier protectionist posture, has removed the massive likeness of Chief Justice Roger B. Taney, at the entrance to the State House, where it has sat for 145 years. Taney wrote the ignominious Dred Scott decision that upheld slavery and denied citizenship to blacks. Removal of the statue has been debated for years. A bust of Taney had already been removed in Frederick. There’s also a one-red light town on Route 140, Taneytown, named for Maryland’s only chief justice of the Supreme Court.

Where will this moment of neo-Nazi madness lead? Louis Mumford, the great social and art critic observed: “Monuments are so we’ll always remember, and memorials are so we’ll never forget.” The slow but systematic removal of confederate statuary is a painful recognition of the greater good of the country, though many believe it is the reckless lobotomizing of history. Just as President Lincoln built the trans-continental railroad to unite America, so, too, does the toppling of divisive tributes in public places bring a conclusive end for the symbol-minded of a tragic war that was over 150 years ago at a cost of 600,000 lives.

The real threat, though, is the contagion of removal, defacement and destruction that could lead to widespread forms of eradication. We are only a short step away from book-burning and other forms of white-out censorship, both private and public. Our cherished freedom of speech has been expanded to freedom of expression, which embraces a whole new idiom of remonstration, no matter how vile and repugnant.

The poet T.S. Eliot wrote that “democracy swings constantly between tyranny and anarchy.” Finding the intricate balance between freedom of expression and public safety is the never-ending function of democracy. The assault on our liberties is very much alive with electronic eavesdropping, a conservative Supreme Court, a quasi-dictator in the White House and neo-Nazi skinheads and white supremacists loose on the streets with the stated approval of President Trump.