The methane blast heard ’round the world. 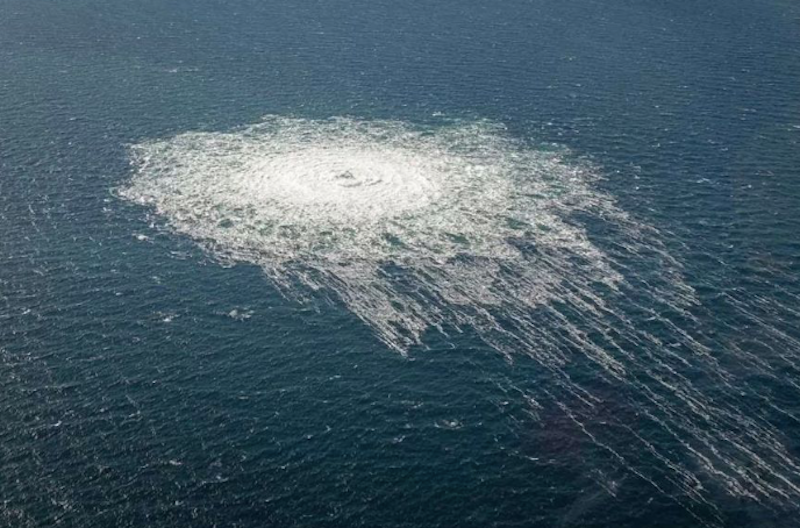 It appears increasingly likely that the Nord Stream pipeline was demolished by a terrorist organization, namely the U.S. government. So says, among others, Jeffrey Sachs, that increasingly apostate but establishment economist of whom I wrote two weeks ago. So, when U.S. lawmakers say they fear threats and intimidation from their constituents, it’s hard to feel as if they’re just a bunch of harmless hippies targeted for no good reason—much as I hate to see anyone subjected to violence.

If it was the U.S. government that smashed Nord Stream, it not only raised energy prices in Western Europe after a couple of tough years but released enough methane into the atmosphere in one go, about a half-million tons, to constitute one of the biggest environmental disasters in years—after which the government will resume lecturing the rest of us about how to live.

After years of U.S. officials saying the Nord Stream project would end one way or another if Russia invaded Ukraine, U.S. Sec. of State Blinken has now called the pipeline’s demolition a “tremendous opportunity” (for us as opposed to Nord Stream’s Russian owners). That doesn’t prove he had anything to do with this mad blow to commerce, but I can’t help recalling a wacko painter who dated him yelling at me at a Brooklyn party once for my “libertarian bullshit.” The uncivil bureaucrat-liberals and the uncivil artist-liberals are members of the same species, despite some of my fellow libertarians chronically failing to see the connection, thinking the latter, at least, must be our friends deep down. And, aw heck, maybe the bureaucrats too. But in truth: neither is a friend, neither is tolerant or freedom-loving.

As few besides Elon Musk have dared say out loud, no matter how long the fighting goes on in Ukraine, the conflict seems destined to end with some sort of compromise in which partial control of an Eastern strip of that country is ceded to Russia, providing a corridor to Crimea and the sea for the Russians (pragmatic brutes who take the specific chunks of land they need despite extreme rhetoric about deserving a whole empire). To salve the pain in the West, vast Ukraine-rebuilding contracts will be doled out to the well-connected at taxpayer expense, de facto cuts of the renewed and redirected energy trade, while face-saving, last-minute, symbolic victories by Ukrainian troops will be touted as having driven out the Russians, at least on paper.

Or does that sort of pessimism/realpolitik mean I’m a dupe of Russian propaganda? Maybe to get the real story, I should henceforth tune in to the CIA’s newly launched podcast. The CIA director said in the first episode that it’s important to explain what they do, and you can’t argue with that. Will they review the new movie MK Ultra, in theaters this week, about real-life CIA mind control experiments? Cat’s out of the bag on that old project, so they might as well review the film sympathetically and do their occasional “The Agency has learned and grown since then and strives not to repeat such mistakes” routine.

The intelligence sector, along with the police and the military-industrial complex, does learn from the past, but so should liberals and conservatives who claim, each faction in its own way, to be the sensible ones, our culture’s guardians of institutional memory instead of just short-term political passion, yet routinely refuse to digest new evidence that the U.S. government lies and destroys things.

Mainstream political thinkers, pundits, and citizens should stop acting surprised, scandalized, and offended when someone states the obvious about crimes committed by mainstream institutions. Start incorporating troubling revelations into your basic mental architecture, your assumptions about the sorts of (fairly obvious) incentives that shape how politicians, governments, and economic institutions behave—instead of sweeping the revelations under the mental rug, as if tamping them down is your patriotic or ideological duty.

Assume government and similarly powerful institutions behave in the same self-interested way that people—including Russians—do and you might find that you need to take certain allegations about official misconduct more seriously.

Solid evidence is the important thing, but don’t dismiss out of hand, say, recent stories strongly implying that the FBI infiltrated and manipulated the Oath Keepers organization to heighten criminal activity during the 1/6/01 protest, or that George Soros’ organizations tried to pay legal commentators in the news to exaggerate the riot in bullet-pointedly specific ways, likely trying to lay the groundwork for another Steele Dossier-style bootstrapping of press mentions into a legal investigation, this time not for purposes of impeachment but specifically to ensure J6 can be made to qualify technically as an “insurrection,” which would potentially constitutionally bar Trump from running again.

You need look no farther than Fox News (my former employers for a short time) to see the sad, shallow cognitive dissonance created by trying to maintain the view that (a) government is a bloated, corrupt institution but (b) we can also trust its cops, soldiers, foreign policy planners, and spies to do the right thing and fight for “America.”

U.S.-backed plans were announced for a Baltic pipeline, running from Poland through the Baltic Sea and Scandinavian countries, the day after the Nord Stream vandalism. I hope there won’t be some violent Russian counterstrike in my city, New York, for this chapter in sleazy geopolitical strategy. If there is, though, we all by now know how shocked commentators headquartered here will act at both Fox News and the liberal news networks, as if unable to imagine, or merely remember, what could possibly have inspired the barbarism.