A Motto Democrats and Republicans Can Agree On. 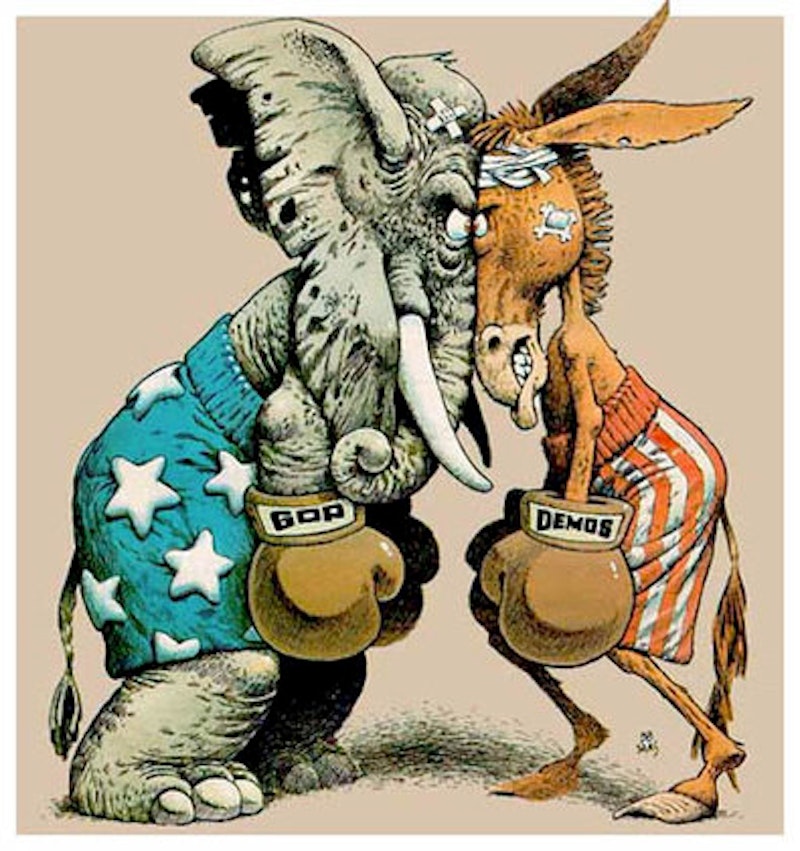 Last week, former GE CEO and Romney supporter Jack Welch, greeted the relatively upbeat jobs report by suggesting a White House conspiracy. Most observers saw this as a sign that Mr. Welch was a nutball—and so he is. But his remarks also highlight some of the concrete ways in which partisanship can be incompatible with patriotism.

Welch's comments exposed an open but uncomfortable secret about the Republicans this campaign, which is that they are rooting for the country to do badly. Welch was viscerally upset at a gain in jobs; the inescapable conclusion is that he’d like the economy to be doing much worse than it is. Similarly, Romney's tried repeatedly to make Obama out to be Jimmy Carter… and has said that if there's a foreign policy stumble like the hostage crisis, he'll take advantage of it. Again, that starts to look uncomfortably like he's hoping and praying for America to get humiliated, or for Americans to get killed.

Wishing isn't a crime, even if, as Welch shows, doing it in public can be embarrassing. But there's often a thin line between wanting the country to go to the devil and taking active steps to push it there. As many have pointed out, the Republicans have vigorously opposed policies that would increase jobs. And while they claim they're doing so because of deficit concerns, the fact is that Republicans never seem to worry much about deficits when there's a Republican president. Instead, their motivation is for Obama's failure, and if that drags out the recovery and hurts the country, so be it.

It'd be nice to think that this sort of reasoning was confined to Republicans. But, obviously, it isn't. The most flagrant recent example on the Democratic side is the Missouri senate race, where Claire McCaskill has been doing everything she can to give an unqualified, retrograde fool a chance at a seat in Congress’ upper chamber. In the primaries, McCaskill ran ads calling Tea Party nutter Todd Akin a "true conservative" in the hopes of boosting his candidacy. Reportedly, McCaskill spent more money promoting Akin than he spent promoting himself. When Akin was nominated, and then immediately started babbling about how some rapes were more legitimate than others, McCaskill was there to help him again, insisting that the Republican Party shouldn't force him out of the race.

McCaskill's hard work has paid off and Akin is the nominee, no go-backs—which is fine, except that McCaskill is so unpopular in the state that she might still go down to defeat. In which case, she will have been instrumental in helping to elect the worst possible Republican candidate to the Senate. In short, she deliberately put self and party above her state and her country. She deserves to lose… and Akin deserves to lose. Maybe as a compromise we could just not fill the seat, and tell Missouri they'll get it back when they've shown they can use it responsibly.

It’d be easy at this stage to moan and groan about the lack of civility among politicians and so forth. But politicians are, for the most part, self-aggrandizing hacks. Jack Welch doesn't need a job, so he doesn't really care how many others are on unemployment; Claire McCaskill knows that the most important thing in the world is for her to keep drawing that Congressional salary. That's not because of partisanship; it's because of human nature.

That's not to say that there's no recourse. There are ways to better align partisan zeal with patriotic virtue. Our current Congressional rules make it easier to stonewall than the founders ever intended; getting rid of the filibuster and of anonymous holds and so forth would go some way towards preventing minority parties from obstruction as an electoral tactic. As for McCaskill's nonsense, I don't know what there is to be done about it, honestly. Sometimes I guess you just have to shrug and accept that the people representing you care more about their stupid careers than their country.