Mary Matalin Has Something to Say to Paul Krugman

It's the same thing Jack Welch told the Bureau of Labor Statistics: You lie! 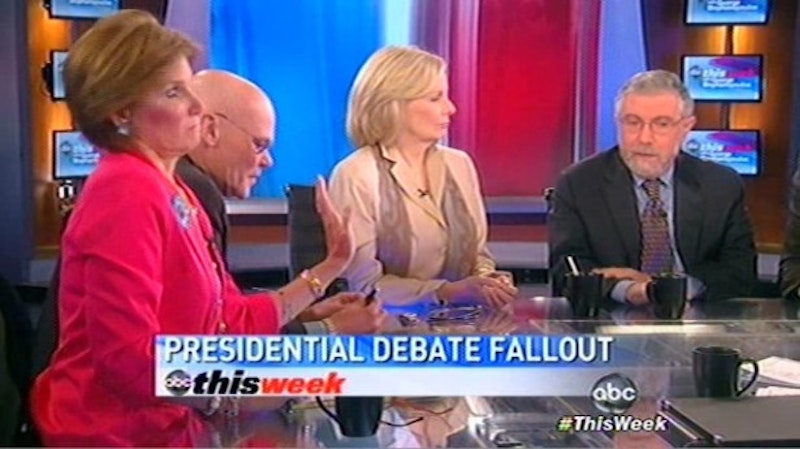 Mary Matalin helped the first George Bush lose reelection. She's been on television ever since, including the most recent broadcast of ABC's This Week. At the end of each show, the program has a table of experts who talk things over; they're all seated elbow to elbow. While seated this way, Matalin leaned forward and told tablemate Paul Krugman he was a liar. She said it with emphasis and a degree of vengeful pomp: “You have mischaracterized and you have lied about every position and every particular of the Ryan plan on Medicare, from the efficiency of Medicare administration to calling it a voucher plan, so you’re hardly credible on calling somebody else a liar.” There!

Matalin's attack came two days after Jack Welch, who used to run General Electric, said the country's new employment data had to be fake. “Unbelievable jobs numbers… these Chicago guys will do anything… can’t debate so change numbers,” Welch tweeted on Friday. Employment data being faked by the government—I don't think anyone has ever made that charge before, at least not in America. And I'm kind of surprised that somebody on a Sunday chat show would call a fellow guest a liar. Never heard of that before, and I used to watch The McLaughlin Group, where the guests and host are all supposed to act like jerks.

When I saw the headlines about Matalin and Welch, I thought the Republicans had begun an offensive. They have lied so much (the selling of the Bush tax cuts, the run-up to the Iraq War, the promises to control spending, the flip-flops needed to build Mitt Romney's presidential career) that their lying has become an issue. Not just being politicians and playing games and equivocating, or even lying about some particular issue, but lying every time they open their mouths, lying the way the modern Republican Party has learned to lie.

This is what the next four weeks are going to be like: Captain Kirk and his renegade duplicate pointing at each other (“What's the matter, Spock? You know it's me!” “Come on, Spock! He wants the Enterprise!”). Mitt Romney started the game last Wednesday when he treated President Obama like a kid who can't help messing with the truth. I thought Matalin and Welch were continuing the game with their charges this weekend. But maybe not. Maybe they were primed by simple frustration with facts that won't break their way.

Welch now seems to doubt he made his own charge. “Have never commented on White House in any tweets I can recall,” he tweeted Sunday. As for Matalin, when you watch her during the roundtable she seems more like someone having an outburst than pursuing a strategy. I'm not saying the old trout sounded drunk, because I don't think she was. No slurred syllables, no jerkiness of motion. But for most people it takes a lot of gin to reach such a state of triumphant and yet disgruntled rockheadedness. In this state Matalin canted forward to give “Doctor Professor Krugman” a piece of her mind. She was like a leathery-faced matron starting and settling an argument in a back booth of the bar at a dingy golf club late on a long, rainy, unhappy afternoon. The difference is that the matron has to sleep things off and possibly send her attack recipient a card. Matalin has a whole political party waiting for her to do more of the same.

Mary Matalin's voice. Tonally, it resembles a garbage truck making its loader go up and down. Another side note: She forms her words almost entirely in the space just above the teeth and below the nose; only the very edges of her nostrils get any part in shaping the air, so the words all sound buzzy and incomplete at the edges—every word, no matter how loud she's getting. Actors on Saturday Night Live try to create characters like her.

“A president who seemed angry.” I just made that quote up. I expect that something like it will be used when Republicans spin the second Obama-Romney debate. They will look concerned, and possibly commiserate with Obama: “When you're running out of time, and you start to realize you're coming up short and you, you just haven't done what you told people you were going to do, well, that's a very emotional moment, and I guess Barack Obama was getting emotional out there tonight.” Meaning that he answered back Romney's charges the way our side has been asking him to.