Liberals profess to revere hunters, and TR was the biggest of all. 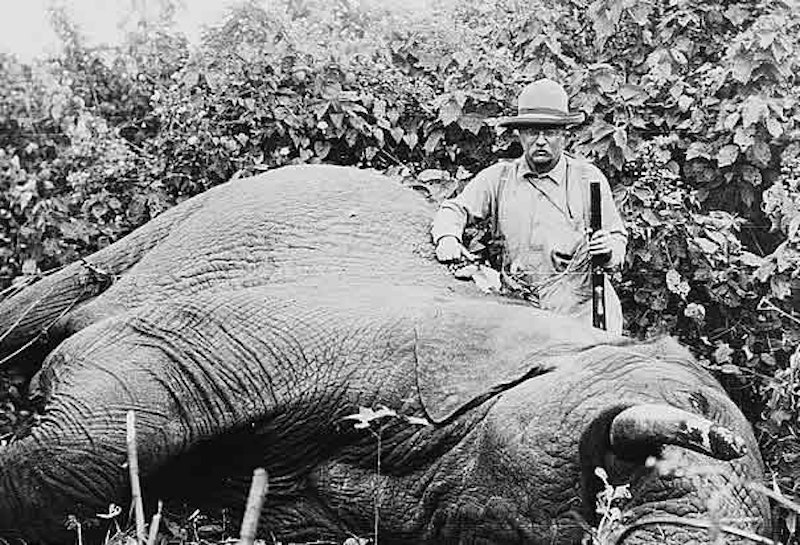 It’s been two months since the horrific Newtown shootings, yet the gun control debate—at the time, I thought that tragedy was the last straw—has pretty much fizzled out. President Obama still speaks about the issue, but it’s slipped down on his agenda, with Chuck Hagel, reticence over spending cuts, constant complaints about Republican obstructionism and his feel-good proposal for pre-school taking precedence. This dismays The New Republic’s Timothy Noah, who writes the “TRB From Washington” column for that magazine now (in the title’s re-design, “TRB” is given less prominence, banished to the jumble of obtuse articles that owner Chris Hughes pays for), and he makes at least one very good point. (TNR has a paywall for most content, or at least a very complicated log-in procedure, which is a bit weird given all the promotion; you’d think Hughes would adopt a Woodstock-like “it’s a free website now!” approach.)

It’s Noah’s contention, and a correct one, I think, that liberals—including Obama—are hurting their cause for gun control by “fetishizing” men and women who use guns to hunt. I’ll get back to that, but first there’s Noah’s agonized notion that even today, with Obama’s reelection, broad acceptance of gay marriage, increasing environmental awareness and enthusiasm for taxes, it’s “still not entirely acceptable to be a liberal.” Could’ve fooled me, judging by last November’s elections, but he continues: “The lingering taboo [of identifying yourself as a liberal] is anthropological rather than ideological. Liberals are judged inauthentic because (at least according to stereotype) they live in cities, avoid church, and don’t own guns; they feel the need to describe themselves using other terms.”

That is a stereotype: I live in a city, don’t attend church and have never owned a gun. I’m not a liberal. And while it makes sense to me that powerful guns, the kind that are used every night by bad guys on television shows, ought to be restricted, I don’t give a hoot, unlike Noah, about hunters. Anyway, while Noah is frustrated over his fellow liberals’ bowing down to, as Obama said, “the traditions of hunting that trace back in this country for generations,” I think there’s a simple answer.

Roosevelt, by dint of his dedication to conservation, trust-busting and rhetoric against the wealthy, is, in liberal-think, the most popular Republican president of the 20th century. And Teddy liked to hunt. A lot. Including today’s hunters—and as Noah points out, even their ranks have thinned—in a blanket gun-control measure, would dishonor Mt. Rushmore T.R.

Like Noah, I’ve had exactly one experience in firing a gun, and, similarly, have no desire to repeat it. I was 22 and my four brothers and I were on a road trip to the Poconos, and, as there’s not much to do there, we found ourselves at a shooting range on a late Saturday afternoon. Can’t really remember which one of us had the best score—we were all half in the bag—but it wasn’t me. Shooting wasn’t something taught out in the wilderness when I was a Boy Scout—but hey, my skill at archery is tops!—so the thrill of hunting never took. Now, several years ago, I did have a very fascinating telephone conversation with a professional hunter in rural Georgia. I wanted to get a boar’s head as a Christmas present for my younger son, a swell decoration for his room, and went back and forth with the hunter over price, delivery and the like. He went on a run—holiday season was his cash cow, so to speak—on a Tuesday, and a week later, the taxidermy mount arrived by FedEx.

In any case, when the gun control controversy—if it’s still a controversy now, at least until the next mass murder—bogs down and is watered down, Democrats (whether they fess up as liberals or not) can blame Teddy Roosevelt.