Jersey's Governor can get nation to shed pounds with him. 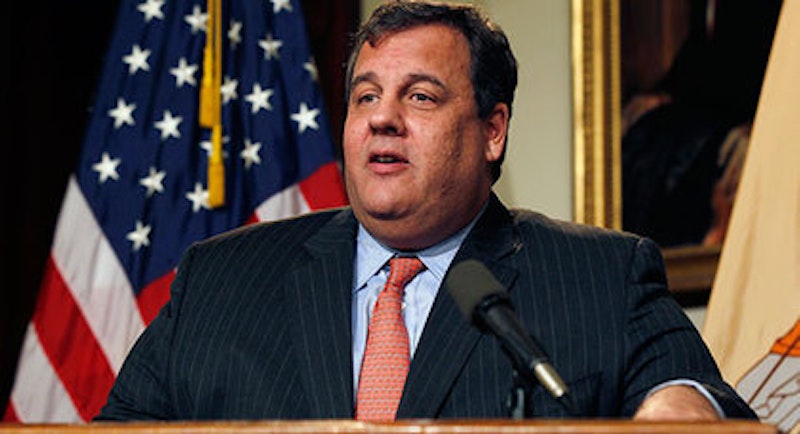 Already the talk about 2016 turns on whether a fat guy can get elected president. So, hey, Chris Christie, here’s a presidential campaign plan for you. It costs virtually nothing, is guaranteed to draw more attention than dull speeches and aimless stunts, and Weight Watchers and Jenny Craig subscribers are waiting for you to take off as a role model. What’s more, the results are in the record books, at least in Baltimore.

“The idea that somehow I don’t care about this [weight],” Christie, the governor of New Jersey, has said, “of course I care about it, and I’m making the best effort I can.” Well, considering the alternatives, maybe that’s not good enough. And scarfing down a donut on David Letterman’s show is Christie’s riff on modest self-deprecation. There are other ways of handling weight problems such as bariatric surgery and binge purging. But nothing takes off weight like a starvation diet. Here’s a case in point.

Back in 1975, the Fallstaffian Wally Orlinsky was running for reelection as Baltimore City Council president. Orlinsky was a man of huge appetites and the evidence was in his girth, though nowhere near as enormous in width or height as Christie. Every Monday morning Orlinsky met for breakfast with the late Chris Hartman, then director of the old Baltimore Chamber of Commerce and another man of considerable bulk, and J. Joseph Clarke, then a staffer at the Greater Baltimore Committee and now a developer and husband of Councilwoman Mary Pat Clarke. As Clarke recalls it, “Wally and Chris would each routinely consume two or three Egg McMuffins” during those weekly campaign planning sessions, both on a clear path to angioplasty.

One morning, Clarke says, he received a call from Orlinsky’s City Hall office advising him that a close friend of Orlinsky’s had just had a heart attack. Orlinsky was scared, and he wanted the name of the Johns Hopkins doctor who specialized in weight loss who was a friend of Clarke’s. Enter the melodrama Dr. Tom Tadesky, an internist who rattled the bejeebers out of Orlinsky during their first consultation.

Clarke noticed at their next Monday breakfast meeting that Orlinsky was not eating. Asked for an explanation, Orlinsky said that Tadesky had designed a diet program that strictly limited his food intake. There is no memory of how much weight Orlinsky was carrying at the time he began his diet. Then a light bulb went off in Orlinsky’s head the way they do in comic strips. The diet would be incorporated into his reelection campaign and, in fact, would become his campaign.

Every morning thereafter, for the duration of the campaign, Orlinsky would hold a weigh-in news conference at City Hall. Orlinsky’s declining weight was a daily news item and everywhere he went his diet was the main topic of conversation. There were no discussions of issues. There were no omens of municipal apocalypse. And whenever Orlinsky was asked how he did it, he’d say “call Dr. Tadesky. Here’s his phone number.”

Day after day Orlinsky tipped the scales at ever diminishing weight. By the campaign’s end, Orlinsky easily won reelection and in the process had shed 70 pounds from his considerable heft. Immediately after the election, Orlinsky went on an eating binge.

Orlinsky and Christie are not the first politicians to deal with weight problems, even though Christie proclaims that he’s the “healthiest fat guy you’ve ever seen in your life.” A search of the Internet failed to show how much Christie actually weighs although The New Republic estimates Christie’s poundage at 300-340. Mike Huckabee, former Arkansas governor, lost 100 pounds before he began his campaign for president in 2008. After the weight loss, Huckabee wrote a book, Quit Digging Your Grave With a Knife and Fork.

There were, too, the controversy and concern over the fluxions of President Bill Clinton’s eating habits and weight that, in part, led to his eventual quadruple bypass surgery and subsequent diet and conversion to a vegan. In the 20th Century, according to The New York Times, there have been five presidents who weighed 200 pounds or more: Bill Clinton, 230 pounds; Lyndon Johnson, 200 pounds; Warren G. Harding, 240 pounds; William H. Taft, 332 pounds; and Teddy Roosevelt, 200 pounds. And in one of those twists, during the 2008 campaign President Obama was considered by some to be too thin to be relatable to the masses.

According to the Center for Disease Control, 34 percent of the population, or 90 million people, are obese, while another 33 percent of the population is overweight though short of the measure of obese. The state with the highest rate of obesity is Mississippi, at 34.9 percent, and the state with the lowest is Colorado, at 20.7 percent. Maryland and New Jersey are in the middle of the pack, with Maryland at 27.1 percent at New Jersey at 23.8 percent. Broken down racially, blacks have the highest rate of obesity at 49.5 percent, Mexican Americans at 40.4 percent, other Hispanics at 39.1 percent and whites at 34.3 percent.

Politics is about connectivity. Christie has already proven by his brash behavior, outspoken disregard for party politics and his worship of Bruce Springsteen and all things New Jersey that weight is irrelevant in state politics. His home-state approval rating is consistently above 70 percent. Christie is up for reelection as governor this year.

Christie reached the apogee of his career as governor during Hurricane Sandy when the Republican governor called the Democratic president in the White House for help then berated his own party in Congress (and even its presidential candidate, Mitt Romney) for delaying a vote on aid for his storm-ravaged state. His constituents loved it. Many in the Republican party blame Christie, in part, for Romney’s presidential loss. Republican apparatchik Hogan Gidley, for example, remarked that Christie “gave Obama a French kiss on the Jersey shore.”

Yet there are those who believe that Christie’s political future is tied to the mathematical tip of the scale. His obesity and implied threat to his health are considered impediments to his potential candidacy. Even a former White House physician, Dr. Connie Mariano expressed concern that Christie could suffer a stroke or heart attack during his presidency. “I’m worried about this man dying in office,” she said. Christie told the doctor to “shut up” since she hadn’t examined him and was not familiar with his family history. Christie called Mariano “just another hack who wants five minutes on TV.”

If Christie decides to run for president in 2016, he should adopt the Orlinsky campaign formula of a diet and daily weigh-in. It’s a guaranteed daily headline. There are 90 million obese people—shy of the 118.5 million people who voted in 2012 but nonetheless a solid constituency—looking for a role model and a motive to lose weight. So, Chris Christie, why weight? Diet now.