Barack Obama Is Even More Like Principal Skinner Than I Thought

Surviving the latest State of the Union address. 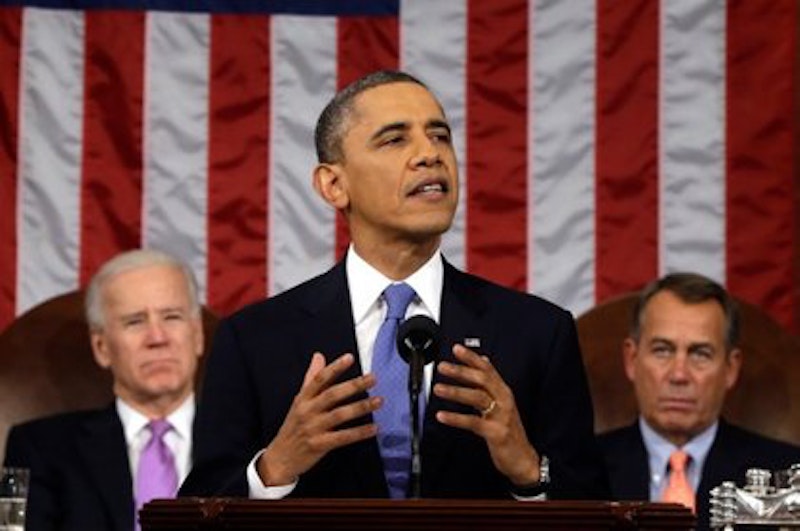 President Obama is such a worthy figure that he seems like Principal Skinner's dream version of himself (if Skinner could hack seeing his complexion turn beige). Bringing up community college just rubs it in: I am a man who will address an audience of tens of millions of people about how the world's greatest power is doing, and when I address them I will make a point of working in the phrase “community college,” a term that brings to mind unpainted radiators and kids who want to be veterinary assistants, because that's the sacrifice I'm willing to make to express my plans for helping America's young people find good-paying jobs in a changing world economy that presents an ever-evolving, etc.

The Curse of Control-F. And actually the speech does have its community college mention. Obama is still that man. Here we go: “Right now, countries like Germany focus on graduating their high school students with the equivalent of a technical degree from one of our community colleges, so that they’re ready for a job. At schools like P-Tech in Brooklyn, a collaboration between New York Public Schools, the City University of New York, and IBM, students will graduate with a high school diploma and an associate degree in computers or engineering.”

This slipped right by me, but there it is. Obama has an unbroken string of SOTU addresses that talk about community college. He doesn't dabble with the phrase and settle for the occasional mention, like Bill Clinton or George W. Bush. He gets it in there every time. Admittedly, the idea attached to the latest mention sounds pretty good, assuming that the associate degrees come with training that's worth the name. I never said the Great Beige Skinner was wrong. But he is the Great Beige Skinner, and that fact might as well be recognized. “Community college,” the phrase, makes it unmistakable.

Characteristic sounds of the genre. “...the true engine of America’s economic growth… forge reasonable compromise… bipartisan, comprehensive… likewise, the leaders of Iran… not only dangers, but opportunities... giving our young and brightest minds new opportunities to serve… remain a beacon… steadfast with Israel… invest in new capabilities… the next great chapter… God bless you, and God bless the United States of America.”

Political analysis. The country has been duly notified that, if the sequester kicks in, it won't be because Barack Obama is against bipartisan cooperation. The president's position is that we all ought to be sensible together: “Let’s agree, right here, right now, to keep the people’s government open, pay our bills on time, and always uphold the full faith and credit of the United States of America. The American people have worked too hard, for too long, rebuilding from one crisis to see their elected officials cause another.”

Lately drones and the president's kill list have been in the news. Obama responded with this: “In the months ahead, I will continue to engage with Congress to ensure not only that our targeting, detention, and prosecution of terrorists remains consistent with our laws and system of checks and balances, but that our efforts are even more transparent to the American people and to the world.” That's supposed to be an applause line, but it produced next to no applause.

Odd. It's not like Obama wanted to be saying what he did, not unless he leaked the white paper that sketched in his secret and not very robust legal arguments for the drone killings. The outcry over the white paper caused him to talk last night about how much he'd like other people to be looking over his shoulder as he fights the terror war. But apparently the people in Congress either don't care about the issue or feel like it's in bad taste to put their hands together when the topic is mentioned. It was like Ron Wyden and Rand Paul gave it a try, looked around them and then stopped.

Obama has his gun control proposals, but John Boehner, the Speaker of the House, might just decide that they don't get voted on. Last night the President demonstrated his counter weapon: getting the public good and steamed that a response to tragedy is met by a Washington roadblock. During the 2012 campaign, Obama remarked that trying to change Washington from the inside, and the inside only, was a mistake; instead you had to bring the public to bear on the decision makers while you still fought your inside game. Republicans pretended that Obama was throwing in the towel and saying no one could change Washington. But no, he was just previewing moments like the one last night.

Shout-outs.  The woman who stood on line to vote did not look well. She seemed like the kind of person who might sit down at a bus shelter and start a conversation with herself. Her hands seemed to be slapping each other, and her mouth and shoulders bucked; I think she was talking but can't be sure. Then people started applauding her (“her concern was not with her tired body or aching feet, but whether folks like her would get to have their say”) and she started clapping because everybody else was. The woman is past 100. If she has to wait hours to vote, our system of elections has got something wrong. But last night conservatives across the country were rolling their eyes and thinking about all those ancient people pulling levers for the Social Security Party when they can't be trusted to drive.

The policeman who fought the killer who was shooting up a Sikh temple in Wisconsin (“When asked how he did that, Brian said, 'That’s just the way we’re made'”) looked rigid with tension. So did the woman to his right; for a while it seemed like she was mad about something and furiously counting the seconds before going home, but then she smiled as the policeman's heroism was described. Her smile did not emerge in full form and looked like it had to fight to be there, but not like it was forced.

The nurse who saved newborn babies from dying in the Sandy storm (“her thoughts were not with how her own home was faring—they were with the twenty precious newborns”) really got a kick from her mention in the speech. A “Hey, how about that” kind of smile popped on her face, and she turned to her neighbor, who was Michelle Obama, and directed the smile at her. Michelle answered by bumping her shoulder against the nurse's shoulder. The nurse bumped back, and it was like the two of them were executing some new way of being buddies, a jostle-snuggle.