Liberals for the Sequester

It's a Great Idea if You Hate America 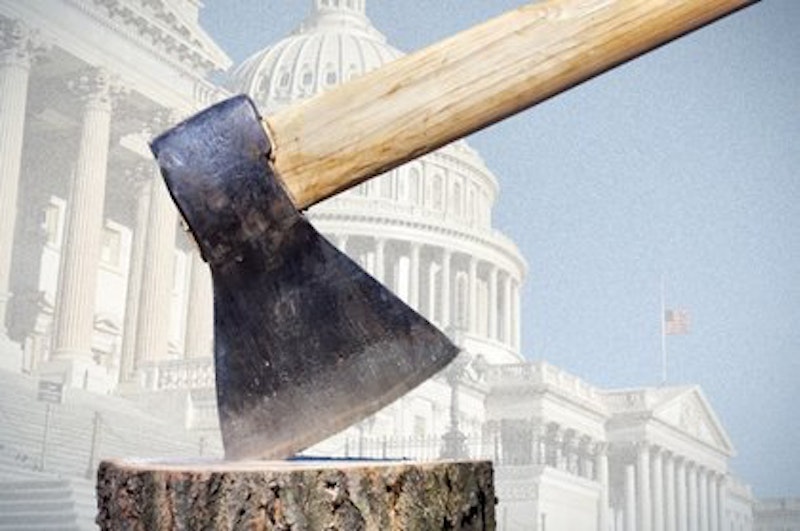 Conservatives have apparently convinced themselves that the sequester isn't so bad, on the grounds that anything that slows government spending and irritates Barack Obama must be positive, even if every economist on the planet thinks otherwise. As a liberal, I don't really see why the crazed GOP Tea Party nutcases should be the only glass-half-full pollyannas racing cheerfully into the apocalypse while spouting great gouts of bluster and drivel. We lefties can love the sequester too! Let me count the ways.

Crippling American defense. Everyone thought the sequester would never go into effect in large part because the neocon right was supposed to be terrified at the prospect of defense cuts which would prevent us from invading other countries willy-nilly whenever we felt like it. But, as it turns out, the Tea Party wackos who hate big government don't actually want to acknowledge that the rest of the world exists, much less send troops out there to die in it. As a result, they're willing to implement significant spending cuts in defense.

Admittedly, those cuts maybe aren't as apocalyptic as hawks would have you believe. But they might be enough to make us think twice or three times before invading Iran, or North Korea, or Canada, or wherever. So hurray for that.

Cutting greenhouse gas emissions. The current GOP doesn't even believe in carbon, much less in climate change. So of course there aren't any provisions in the sequester for directly addressing carbon emissions. But there don't need to be! The sequester, just about everyone agrees, will send the U.S. economy into a tailspin, perhaps even into another full blown recession.

A recession means fewer products are sold, which mean that less fuel is used in transporting goods. It means less is made, which means that less fuel is used to manufacture goods. It means people have less money, which means they travel less, which means that fewer car and plane and train trips are made. As a result, the last global recession saw an "unprecedented" decline in greenhouse gas emissions. In other words, the best way to slow climate change is to cripple the world economy. The sequester will do that! The GOP: just a bunch of tree-huggers after all.

The 2014 elections. Most Americans don't pay attention to politics even a little bit. I'm sure that the vast majority of my countrymen and women have no idea what the sequester is, much less when it's going into effect, and who’s to blame for it. So when the economy comes crashing down, I don't really think that the GOP will be held accountable, no matter how intransigent or deranged they might be.

However, people do tend to notice when they lose their jobs. The GOP gained control of the House in 2010 not because people hated Democrats, but because people blamed their troubles on whoever was nominally in control. Again, in 2010 that was the Democrats. In 2014, on the other hand, the House incumbents will be a majority of Republicans, and if the economy is in deep recession, it's those Republican incumbents who are going to get thrown out on their steaming ears.

Of course, Senate Democrats will face a similar problem. But since that chamber's Democrats have already decided to give the Republican minority a filibuster veto over everything they do, it's hard to care that much.

There are other reasons to whistle at the apocalypse too. Across the board cuts mean cuts to drug war funding and domestic spying and prosecuting whistle-blowers. Maybe it’ll even mean reductions to ethanol subsidies. There are lots of things the government does that are horrible and stupid. Less of those things would be a boon.

Now, in no way does this mean that the sequester is anything but a stupid idea. It’s an incredibly stupid idea. But if, like me, you're a liberal who hates America, there's at least some upside in watching the country pick up a bat and methodically and self-righteously bash its brains out.