These debates have had problems, but the most basic problem is the way these candidates talk. 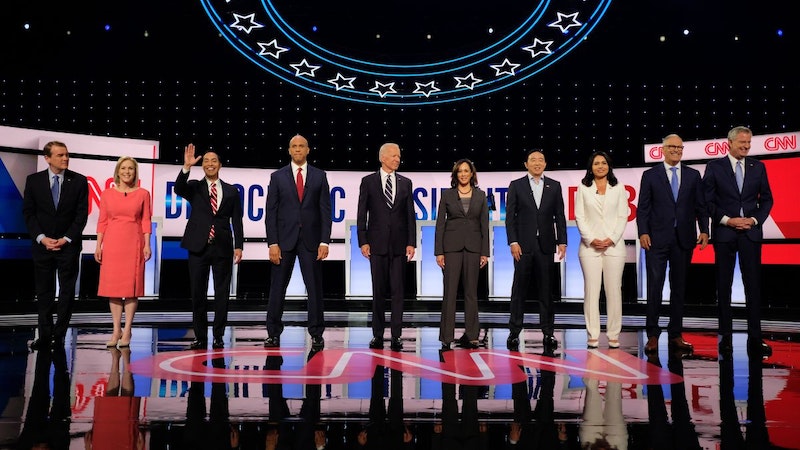 Tulsi Gabbard, the peacenik warrior woman in white, won the debate. That’s not saying much, for anyone with clear positions or able to manage a grammatical sentence would’ve won this sucker. Well, de Blasio made sense in his grating way. Castro was listless and mechanical, but he didn’t say the opposite of what he meant, which puts him in the upper tier.

These debates have had problems, from the number of candidates to the solemn stomping of the color guard. But the most basic problem is the way these candidates talk. Perhaps you came into the debates wanting to really be inspired. Perhaps, like Frank Bruni, you wanted to be moved, reminded of what it really means to be an American (yawn/snicker), and shown how we can be rescued from Donald Trump. Then, in the course of last night's conflagration, your standards started to sink. By the end, you'd settle for someone who could make sense for a few seconds at a time, no matter what they said.

Of a white boy walking down the street in a hoodie (an important demographic in this election), Gillibrand said, "His whiteness is what protects him from not being shot," which is very disturbing on a number of levels. In announcing her candidacy back in January, she said, "President Trump has chosen to tear this country apart, against all racial lines, all religious lines, every division, every line you can find." It's taken her all these months, but she managed to get through those same bits in her closing statement last night without saying just the opposite of what one hopes she meant. Fucking up double negatives is Kirsten's brand. "They have fat in the system that's real," she pointed out, "and it should be going to health care. So let's not lose the forest for the trees."

Harris speaks a bit better than Biden or Gillibrand (or Klobuchar), though her extreme definiteness about the nature of her own positions ("Unfortunately, Vice President Biden, you're just simply inaccurate in what you're describing" or "That is simply false") is immediately followed by a series of equivocations along these lines: "I listened to American families who said I want an option that will be under your Medicare system that allows a private plan. So I designed a plan where, yes, responsive to the needs of American families, there will be a public plan, under my plan for Medicare, and a private plan, under my plan for Medicare." Later she assured us that "my plan does not offer anything that is illegal," which strikes me as a low bar. Still, I'm looking for a plan that provides hallucinogens and sexual services.

Biden just has no idea at all about healthcare. Last time he threatened to throw insurance executives in jail for getting America hooked on opiates and he repeated that last night: "Number two, we should put some of these insurance executives who totally oppose my plan in jail for of the $9 billion opioids they sell out there (APPLAUSE)." I think he means pharmaceutical executives, and that he doesn't mean that they should be jailed for opposing his plan, but that would presuppose that there is something that Biden means when he talks, which is merely hypothetical. "My plan makes a limit of co-pay to be $1000, because we further support the—the ability to buy into the Obamacare plan." Deductibles, not co-pays? All we can do is wonder. "And second, the idea that this is somehow a bad idea," he added.

Biden likes to say he has three reasons for anything, and then produces two completely unrelated items. Would he deport on an Obama-type-scale? "Absolutely not, number one. Number two, everything landed on the president's desk but locusts."

Or: "Number two, the fact is that my plan also calls for controlling drug prices. The biopharma is now where things are going to go. It’s no longer chemicals. It’s about all these breakthroughs that we have, with the whole—excuse me, immune system." Now, if you're an idiot, it's not your fault. It's a pre-existing condition, and with Cory Booker I passionately believe we must overcome anti-idiot bigotry in our society, which is the very meaning of who we are as Americans. People no more choose their intelligence level than their sexual identity. It's who they are, how God made them. That doesn't require you to vote cretin, however.

Booker might’ve had the best moment, though, responding to Biden on immigration. "And the second thing that this really irks me because I heard the vice president say that if you got a PhD., you can come right into this country. [That is, indeed, precisely what Biden said.] Well that’s playing into what the Republicans want, to pit some immigrants against other immigrants. Some are from shithole countries and some are from worthy countries. We need to reform this whole immigration system and begin to be the country that says everyone has worth and dignity and this should be a country that honors for everyone."

But then he tried to nail it: "And this is one of those instances where the house was set on fire and you claimed responsibility for those laws. And you can't just now come out with a plan to put out that fire." Sure he can. But has he? He doesn't know, really. No one does. As Biden put it, "And so I—you know, I look—anyway, that's what I think my plan—I know what my plan does."

Booker has gathered accolades for the following: "There's a saying in my community, you're dipping into the Kool-Aid and you don't even know the flavor." Now, is that really a piece of traditional African-American wisdom, and how does it apply, and why shouldn't I dip into a random flavor of Kool-Aid?

I'd like to check Biden's claim that he opposed the Iraq war totally, immediately after having voted for it. But even if he did, the whole thing doesn't seem to recommend him. To get through last night's debate, you had to assume that people who want to run this country and tell you the very meaning of America itself must mean something by such coinages as “expulcate” (Biden) or “anti-deluvinal” (Inslee). Perhaps the reason they just kept muttering "Republican talking points" at each other is because the phrase consists of three words strung together in a manner that’s undeniably grammatical. So if you say it over and over, you're not making any grammatical mistakes or, probably, saying just the opposite of what you mean, if indeed there is anything you mean. It helps the candidate's confidence, and reassures the voters that the candidate is ready for the presidency.

I could go on from there, but I'm going to go contribute 10 bucks to Tulsi Gabbard.