Gambling laws for public benefit break down under the weight of money. 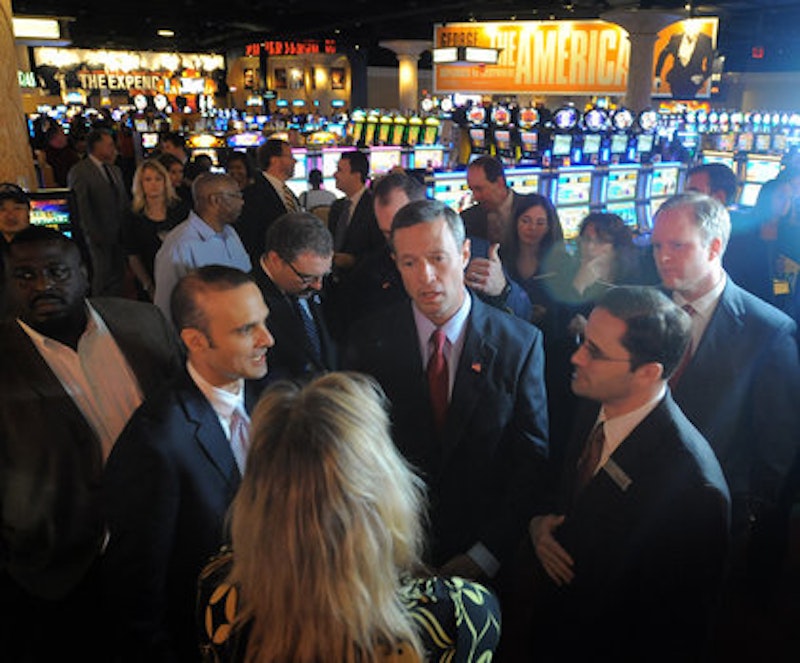 Although the Godfather says there’s no such thing, it might be just a coincidence that Gov. Martin O’Malley’s (D) office confirmed formation of a federal Political Action Committee (PAC) two days before the governor announced a special session of the General Assembly to consider an expansion of gambling in Maryland.

The special session and a sixth casino is a brazen follow-the-money story. The plot line is unfolding in Prince George’s County, MD, where the political culture has always been the color of green and the password is pay-to-play. A former county executive and his wife are in jail for exactly that.

The worldwide gambling industry, with all of its cross-ownerships and multi-national partnerships, is projected to produce an astounding $150 billion in revenues in 2012, according to an annual market review by PricewaterhouseCoopers (now known as PwC). Another study projects a three percent growth through 2015, with worldwide revenues expected reach $513 billion because of the rapid expansion of gambling and construction of casinos. The fastest growth in gambling establishments is occurring in Asia, Africa and Canada, many of them partnerships between American casino owners and foreign partners in marriages of convenience to satisfy local requirements.

So every politician with ambitions and campaign finance committees must be dreaming of finding his or her own Sheldon Adelson, the billionaire mogul with a multi-national casino empire who’s pledged to contribute the obscene amount of $100 million to Republican Mitt Romney to help defeat President Barack Obama (D). Adelson earlier blew a casual $25 million on Newt Gingrich’s fizzled campaign for president.

There’s no question that what’s at stake in the Maryland General Assembly’s special session on gambling expansion, which convenes August 9, broadens the campaign fundraising pool by algebraic proportions. O’Malley’s establishment of a federal PAC opens the bank vault to millions more than the $15-20 million that he spent on his 2010 reelection campaign and the more than $30 million that he’s raised locally and nationally for the Democratic Governors’ Association that he chairs. The formation of the PAC also coincides neatly with the rise in O’Malley’s national standing and the repeated mention of his name by the national media as a possible candidate for president in 2016.

Citizens United, the Supreme Court’s anthropomorphic decision that corporations are people with smokestacks, invites an even greater intrusion of money into the political process through Super PACs and non-profit organizations. Whoever, and whatever – even foreign casino interests - can contribute invisibly and anonymously to campaigns to the lavish extent that a handful of wealthy individuals, and not the collective of voters, may select the next president or any other public official. The currency fertilizing American political campaigns may now be dollars, Euros, Renminbi, Yuan, Jiao or Pataca. Campaigns no longer need question the color or origin of money.

Second-guessing the outcome of the special session is like gambling against the house. The percentages are against you. Two memos have been issued, one from Senate President Thomas V. Mike Miller (D-Calvert-Prince George’s) and another from House Speaker Michael Busch (D-Anne Arundel). Each represents counties involved in the trade-off and each has a different view of the session and its guidelines. No surprise there, but merely a reprise of the standoff during the regular session.

Time is money. It’s no accident that the session is scheduled to convene on a Thursday, an unusual but calculated move to create a pressure-cooker atmosphere to force the legislation through with a minimum of fuss with the enticement of a weekend just ahead. The session is also sandwiched between two extracurricular events, probably deliberately so, to add to the tension and drama. It just so happens that the National Conference of State Legislators meets in Chicago August 6-9, further compressing the time limit to rush the bill through without too much debate, public comment or other considerations. Seventeen Maryland lawmakers have signed up to attend.

To further accelerate the timetable, that event is followed by the annual Maryland Association of Counties annual convention in Ocean City, leaving lawmakers scrambling for time to cram in events and beat the gavel. That’s the calculus of Miller, whose CYA memo dealt mainly with scheduling and the pretense of keeping taxpayer costs down for the maintenance of the session to camouflage his real motives.

There have been occasions, too, where one chamber has rushed its work and recessed or adjourned, dumping its product on the other chamber with little recourse but to enact or let die, with no choice to edit or amend. Any legislation must be enacted by August 20 to qualify for a position on the November ballot.

Yet every political hobbyist knows that it’s Miller, the one-man gang who has forced the issue of expanded gambling and the necessity of the special session with the threat of blocking any important legislative action until he gets his sixth casino. Del. Samuel I. Sandy Rosenberg (D-Baltimore) wrote in his newsletter, for example, that “only a bill authorizing a new license in Prince George’s County will [pass].” Rosenberg is working to make certain that any new gambling money that is directed to the Education Trust Fund will increase overall state spending on education and not merely replace current funding.

Busch’s memo dealt mainly with content more than the tempo of the session. “There are a number of private interests impacted by the proposed legislation,” Busch wrote. “As a caucus, we will focus on the public interest and ensuring the best product for the state.” Busch discussed the sixth casino location in Prince George’s County that MGM wants to build at National Harbor, allowing table games and, for the first time, consideration of internet gaming, the fastest growing sector of legalized gambling. There has been no discussion, at this point, of a tax break for casino owners since MGM withdrew its contingency demand. But give it time. The O’Malley Administration has been slow to develop the promised legislation.

It is the very complexity of the gambling package that undermines the simple selling point that Miller claims requires changing only a couple of words in the state Constitution which must be ratified by the voters in November. Hidden in the details is a change in the tax structure. Busch’s Anne Arundel County stands to lose money while Miller’s Prince George’s will gain money at the expense of others, thus the push for a hold-harmless provision, a key bargaining chip.

David Cordish, who opened Maryland Live! in June at Arundel Mills, is steadfastly opposed to adding a casino in Prince George’s County. Cordish claims 47 percent of his business comes from Prince George’s and Montgomery Counties as well as Northern Virginia, which is across the Potomac River from the proposed National Harbor location.

Cordish has the exclusive franchise for the money but soon he could face competition both to the north and the south of the Maryland Live! location. Cordish, however, appears to have softened his resistance by accepting the idea that a sixth casino is likely and will accept it as long as he is held harmless for the revenue loss. This should free up some Anne Arundel County votes as well as profits.

Further confounding the gambling tableaux is the awarding of the Baltimore City casino franchise to Caesar’s Entertainment, under the brand name of Harrah’s, which is scheduled to open in 2014 in the downtown stadium area. The city delegation is far from united, at this point, on a sixth casino but appears more interested in trade-offs for its votes, the traditional way of conducting business in the State House.

But Mayor Stephanie Rawlings-Blake has cautioned city delegates against holdouts and vote-trading at the possible loss of adding table games to the Caesar’s menu which, she says, will produce an additional $40-50 million a year in revenue for the city and her plan to reduce property taxes.

And a late entry into the competition is Penn National, which owns Rosecroft Raceway, hard by National Harbor. Peter Carlino, CEO of Penn National, which also owns Hollywood Casino in Perryville, has placed the state on notice that he wants a competitive position on the sixth site with the same consideration that is being given to MGM and the Peterson Companies at the National Harbor location. (State law, however, allows only one franchise per owner.) The sound you may soon hear in the distance is the collision of Cordish, Carlino and Milton Peterson, three hard-headed businessmen who are used to getting their ways and who take no prisoners.

In addition, there is a battle raging between the unionized building trades and non-union contractors over the proposed $800 million MGM construction project. The building trades, which have been running ads and lobbying legislators, want guarantees written into the legislation. Non-union and minority contractors have been sponsoring competing ads and are seeking a delay in approval of the casino, which is unlikely, so they can negotiate a piece of the action. It’s a fact proven over and again: Whenever gambling interests intrude in the legislative process the system of making laws for the public benefit breaks down under the weight of money.