After the bridge scandal, I don't want him for president. 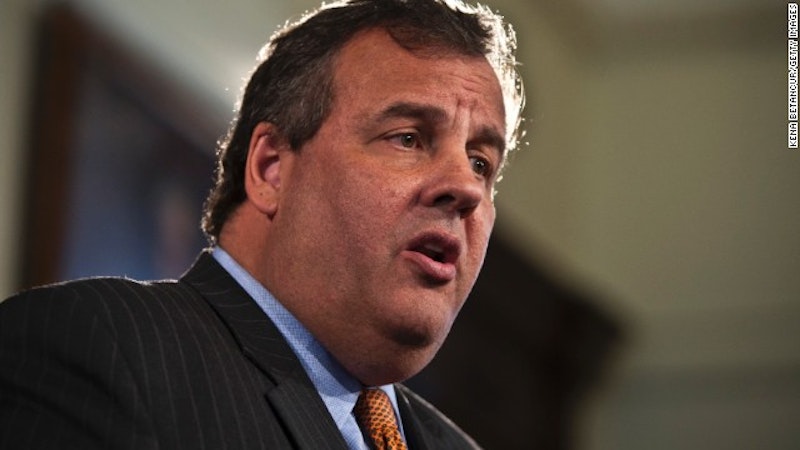 Chris Christie's administration was involved in closing a key New Jersey bridge in order to create a traffic jam in Fort Lee, NJ. The democratic mayor of Fort Lee didn't support Christie's re-election effort, so the Christie-ites decided to screw over the whole community, and (they hoped) to hurt the mayor's election chances. David Wildstein, a long-time Christie confederate and appointee to the New York/New Jersey port authority, contemplated the giant, deliberately created traffic snarl, which prevented students from reaching school, and said jokingly in a publicly revealed email, "I feel sorry for the kids. I guess." A couple of people may have lost their lives because of delayed emergency services related to the bridge snarl.

Christie’s been busily firing people associated with the scandal (including Wildstein) and he's claiming it was all done without his knowledge by overzealous subordinates. Meanwhile, political analysts like Brendan Nyhan are wondering what this means for 2016. Christie's landslide in the recent New Jersey election had poised him as strong contender for the Republican nomination.

I can speak to at least one of those limited effects. I'm a lot less likely to support Christie than I was a week ago.

If you've read my writing, you know I'm a lefty pinko, and that in general I vote for the Democrats. I'm not above crossing the aisle on occasion, though, and I've voted in Republican primaries before (as I did in the last election.) One thing that might cause me to cross the aisle is a chance to give the Republican party a solid push towards sanity. Christie's a Northeast GOP centrist; a breed that the last few election cycles all but killed off. He's willing to work with, and even be seen in photos with, President Obama. He's made the usual Republican noises about ObamaCare, but made some effort to get people into the expanded Medicare program when push came to shove. He certainly hadn't won me over, but if he were running against Hillary Clinton or Joe Biden—neither of whom I'm especially enthusiastic about—I'd be interested in hearing what he had to say.

I'm significantly less interested now, though. There are a lot of things wrong with Obama, but it's been a substantial relief to have someone in the White House who is not (unlike so many of his predecessors, from Reagan to Clinton to George W.) a corrupt, venal prick. Obama can be paranoid and vindictive (as the handling of the Edward Snowden case shows), but Nixonian bullying and deliberate circumvention of the law for personal gain has not been a hallmark of his administration (as far as we know, at least.)

Christie's state machine, on the other hand, appears to have cavalierly screwed over a town's worth of his constituents for the pleasure of scoring a gratuitous political point or two. Even if Christie himself wasn't involved, it shows an ugly lack of judgment to surround yourself with subordinates who think that other people's lives are less important than petty revenge. I'd still like to be able to support a Republican candidate who isn't frothing at the mouth. But if my choices are frothing at the mouth or corrupt bully, then I'm going to end up voting for the Democrat.