Censorship of One Censors All 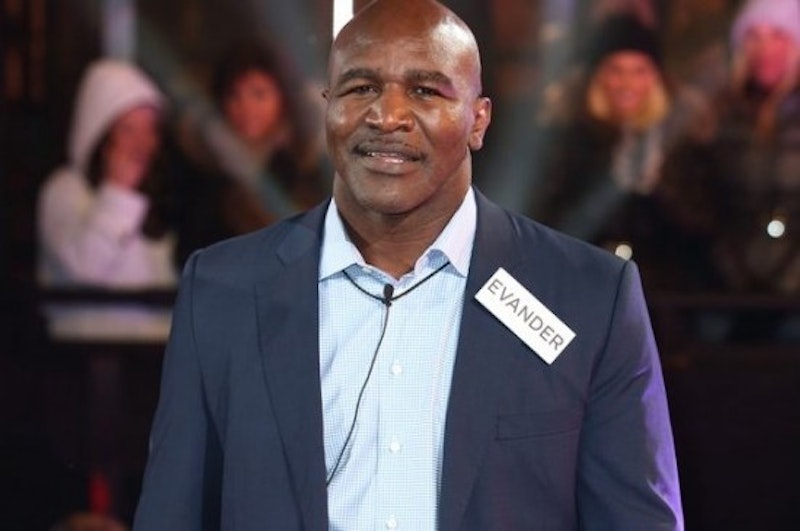 Recently, Evander Holyfield made a complete ass of himself when he uttered his thoughts on homosexuality in an episode of UK’s reality series Celebrity Big Brother. Holyfield was engaged in a private discussion about gay athletes with Luisa, a roommate on the show when he said, “It is a choice, come on, that ain’t the way nobody is made. If you were born and your leg were turned this way, what do you do, you go to the doctor and get it fixed back right.”

According to the UK's Daily Mail, he was reprimanded and told that the rules on unacceptable language and behavior were explained to him. They went on to say: “While Big Brother understands these are the views you hold, they aren’t the views that are held by a large section of society and expressing these views will be extremely offensive to many people. Do you understand why?”

Holyfield then replied that he had forgotten about those rules, that he was just stating his opinion to her in private.

The Guardian also reported the show may be investigated for the incident.

I was a bit stunned after reading this, not so much by his asinine comment but because he was reprimanded for it and that there may be an investigation. In this particular case, the opinion was expressed on a reality show. Since when do we censor reality? Whether it’s in the UK or US, reality shows are generally “off-the-cuff” and extemporaneous. After all that is reality, right?

I’ll reiterate, especially on the heels of the Duck Dynasty imbroglio, that I believe if an employer places a clause in an individual’s contract that specifically prohibits that individual from doing or saying anything that may jeopardize the reputation of the employer, or cause financial or other harm, then the employer has a right to take action. That said, if Holyfield violated his contract, that’s a legal issue to be dealt with by network executives.

But there’s a bigger issue here and that’s the fear factor. In the case of television, there’s a lot of money at stake and network executives fear their networks and sponsors will be sued or boycotted if a star says something considered offensive. They’re supported by hordes of elected officials who support censorship and often express their fears that “offensive” speech promotes a culture of hate and violence. In the U.S. we’ve seen the repercussions of this fear at both ends of the political spectrum. In the entertainment industry, some celebrities have been chastised by employers for their anti-gay comments while others have taken heat for participation in pro-choice movements. For these executives, it’s all about money.

We’re told we should be careful what we say lest we offend someone, but here’s the reality: we live in a world full of people with differing opinions and there will always be one or more people who disagree and perhaps take offense with those opinions. The strategy now is an attempt to silence but there’s a much better solution. I like to attack problems from a common sense point of view and as such I prefer to counter with a voice of reason. While I despise what Holyfield said, rather than calling for him to be punished and demanding censorship, I choose to challenge his remarks with an intelligent reasonable response and encourage others to do so as well.

The last thing we should be doing is silencing unpopular speech. For if we silence that which we disagree with, we eventually silence ourselves.