The larger combatant, government, may fall in this clash. 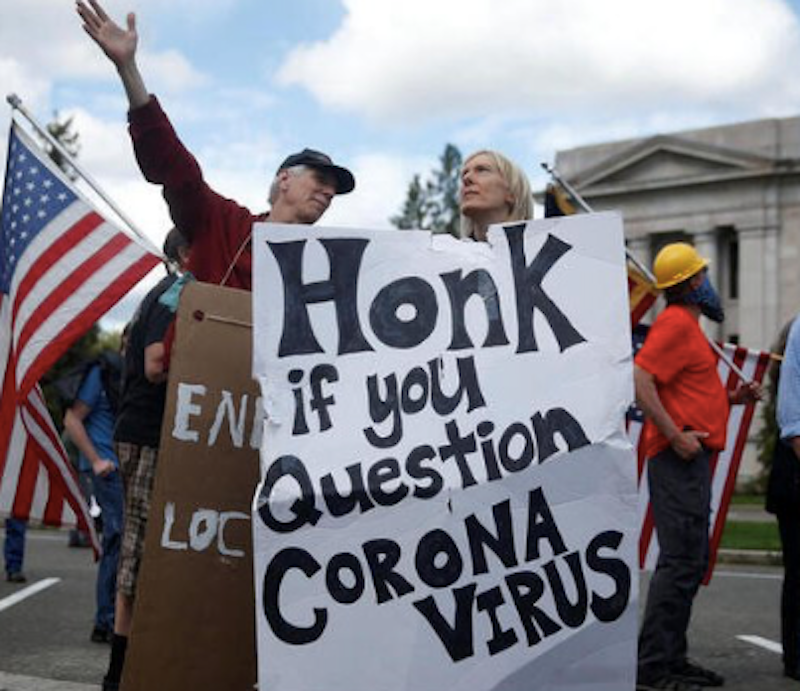 House Speaker Nancy Pelosi using a hair salon that she knew was legally off-limits to other citizens—because of COVID lockdown rules she endorses—is small but telling. I was surprised, though perhaps I shouldn’t have been, to see some leftists defending her actions online. It’s just hair! What’s the big deal? But that’s like saying that a member of Congress accused of theft only got caught engaging in occasional light shoplifting.

The truth, as is obvious to all but the committed, amoral socialists among the U.S. population, is that politicians never hold themselves to the rules they impose upon the rest of us. Pelosi is just the latest example, and there are far more formal and official examples, including Congress routinely adding a clause to regulations saying those regulations don’t apply to members of Congress. The question is not, then, how often they do hypocritical, entitled things. The question is: what’s wrong with you if you continue to obey them? Do you also enjoy having your home burglarized? (Given the continued tolerance for BLM/Antifa riots, some of you probably do. For the rest, it’s long past time to wake up.)

Politicians are not a set of people doing good works who occasionally, inexplicably stray. They’re an exploiter class that couldn’t get away with its crimes for another day if people would stop pretending these con artists possess some kind of moral authority or right to rule, like monarchs of old. Hypocrisy isn’t a glitch in their system. It’s as natural and constant for them as breathing (as this short video montage suggests). In New York, Gov. Cuomo isn’t sure theaters can safely reopen, but casinos and gyms are a go. Does anyone think science decided that one?

I don't know if there'll ever be accurate sociological data on this, but glancing at Facebook certainly suggests that the closer my acquaintances are to officialdom—to DC or the CDC—the more likely they are to parade their compliance with mask-wearing rules and the like, as proudly as if showing off their bowling trophies. Comply if you must, but one ought to approach the matter with sorrow and a sense of loss, if one ever valued freedom.

Laws and regulations create precedents, and if you pride yourself on doing the civic-minded thing, you should at least be asking yourself what sort of controls will be justified in the future, over what sorts of perceived crises, if the lockdown is regarded as policy too wise to warrant rebelling against. COVID may be far worse than a normal flu when the numbers are all crunched, but none of the official numbers so far suggest it is orders of magnitude deadlier for humanity than annual flu. Yet by and large people accept it’s bad enough, whatever the previously unstated threshold for instituting lockdowns is.

Who knew a sword of Damocles hung above civilization, and each year in which, say, my old hometown of 40,000 people lost two people to the flu (as is the norm), we were just two more such deaths away from shutting down civilization (which is approximately the toll from COVID so far)? We can’t be this fragile if we’re to continue as a functioning economy. (The people joyously seizing the opportunity to crow in response that “lives matter more than money” are as evil and callous as—well, as the people who lately say exactly the same thing when faced with rioters burning cities, as if such a mindless slogan erases all tradeoffs and dilemmas.)

So, has anyone in a position of ostensible authority bothered to articulate exactly how bad the flu or some similar contagion would have to get in the future before we’d do another globe-spanning lockdown? Are we allowed to know that? Are we allowed to ask? Is the formula kept in a basement somewhere we can visit? After this, might we start decimating the economy every few years for bad-enough variations on the flu? Is there any publicly contestable rule on this to which governments even pretend to point, one that is comprehensible by the people subject to the rule?

Before a lazy human race once more assumes large, authoritative bodies can be trusted to apply the best science and sort it all out for us, it’s worth noting that, for example, the official Twitter account of the United Nations reacted to the crisis in part by tweeting on Sunday that “The #COVID19 pandemic is demonstrating what we all know: millennia of patriarchy have resulted in a male-dominated world with a male-dominated culture which damages everyone—women, men, girls & boys.”

Can’t argue with science! (Isn’t this also the organization that claims to dispassionately, apolitically assess the science on global warming every seven years or so?) Forgive me if I think they may be weighing factors other than science and costs. Forgive me if I think WHO and the like are full of the same sort of arrogant bureaucrats.

Meanwhile, despite the naïve pretense that incontrovertible science numbers will show us what to do, one Texas county, for example, dropped overnight recently from 4600 purported active COVID cases to fewer than a 100 after an audit. Maybe this is just the messy process of science. Or maybe—maybe—this is the biggest, costliest scam in history.

The best way to redeem our losses would be to vow never again to let any institution arise that even claims to have the authority to make these decisions or control us this way. To end lockdowns, end government. Now.