Dave Rubin Is Not Far-right

Mother Jones and angry leftists use guilt by association against him. 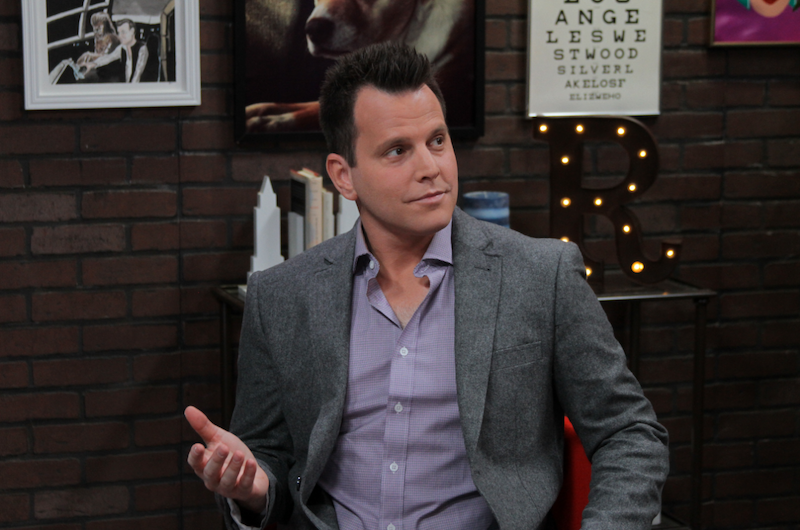 In a recent article for Mother Jones, “Cashing in on the Rise of the Alt-Right,” Josh Harkinson discussed controversial far right-wing figures like Mike Cernovich, Gavin McInnes, Lauren Southern, Based Stickman (aka Kyle Chapman), and Baked Alaska (aka Tim "Treadstone" Gionet) while mentioning The Daily Shoah, a neo-Nazi podcast. It was a motley crew that many associated with politics—even in Republican circles—would dread being included in. Dave Rubin, of The Rubin Report is one of those people. The former comedian was shocked, and then livid, upon seeing his name in the piece that focused on activists that are more extremist than Breitbart. Taking to Twitter, he called the article “libelous” and demanded a retraction while objecting to being labeled far-right with: “I'm gay married, pro choice, against death penalty, pro pot legalization. Far right?”

The YouTube interview show host is generally mild-mannered, adding additional interest to the Twitter exchanges (“You're a hack”) he then had with Harkinson. Rubin’s been getting flack from people on the left who are convinced he's a wolf in sheep's clothing—a Trump-voting, alt-right fellow traveler masquerading as a liberal—and it looked like the Mother Jones article was the last straw for him.

Some of Rubin’s detractors claim he has too many right-wing fringe characters on his show and inadequate representation from the left. While his guests are often right/libertarian, this is hardly prima facie evidence that Rubin’s a right-winger. He's just talking with these people. In addition to the liberal bona fides that Rubin tweeted to Harkinson and Mother Jones, he’s publicly stated that he supports a social safety net, strong public education system, and prison reform, while opposing unnecessary wars and nation-building.

When a liberal’s put in a room with a DeploraBall attendee, many on the left want to see a cage fight. The “punch a Nazi” crowd projects itself onto Rubin, and when he doesn't do the interview the way they'd do it, he must be punished. They're confused when he doesn't rip into some like alt-lite provocateur Milo Yiannopoulos. How can he chat pleasantly with the guy who stirred up a racist Twitter mob against Ghostbusters actor Leslie Jones?

One of the many things people don't get is that Rubin’s not a confrontational person. He's not Joe Rogan, who had Yiannopoulos on his show and pounded him hard for his hypocrisy on religion and his own homosexuality. Rubin has the self-awareness to realize that jack-hammering people with opposing views wouldn't work for him, so he’s wisely chosen to act as more of a facilitator of conversation than an anti-Trump crusader. Moreover, as his liberalism is of the classical variety, he's easily able to find common ground with people that a regressive lefty could not.

Rubin's an alumnus of the regressive left-wing political show, The Young Turks. Tiring of the steady stream of demagoguery and dishonesty from Cenk Uygur's band of ideological hardliners, he quit to start a quest of his own. Debunking the many harmful myths associated with shows like TYT is now his thing. What turns him on is exposing the inanity of the left’s unhealthy fixations: the victimhood and white privilege fetishes, intersectionality, call-out culture, the absurd concept of cultural appropriation, and all the other trappings of PC culture run amok.

Rubin's critics should push their hate aside and try listening to some of the things his “deplorable” guests are saying. After all, they themselves are a big reason Trump was elected. Until they realize they're complicit in bringing on much of their current suffering, however, the pain will keep on flowing.

When left wing’s bête noir, Yiannopoulos, went on The Rubin Report, some of the things he said made sense. He pointed out the left is often much more interested in punishing “offenders” rather than being ideologically consistent or intellectually honest. Alt-lite celebrity Mike Cernovich talked about how most of the immigrants going from the Middle East to Europe are men (only 27 percent are female) and the serious societal problems this will cause. This isn't a topic the censorious left will even let you discuss without calling you a racist or Islamophobe, but ignoring it won't make it to away. Canadian conservative-libertarian Lauren Southern told Rubin that the people calling everyone Nazis aren't educated on the topic of fascism so they see it where it doesn't exist.

By far the most controversial guest Rubin’s had on his show is the outspoken British critic of Islam, Tommy Robinson, who’s routinely called a racist and a bigot, even though there's no evidence he's either. Rubin showed courage in having him on because, as Robinson explained, just associating with the native of Luton, England makes you a racist to the left, which likes to store its notions tidily in boxes. “Some of the best people I've met in my life are Muslims,” the infamous Islamophobe Robinson told Rubin during that show.

Tim Pool is an independent journalist who, like Rubin, doesn't shy away from controversial topics and interview subjects. He's also frequently called a right-winger, even though he's center-left, which makes him a target for the antifa at the demonstrations he covers. I asked Pool, who’s also been on The Rubin Report, why he thought so many are taking shots at the show’s host. “I think it has to do with the collective versus the individual,” he said. “Since Rubin is willing to have an honest conversation with people of all political backgrounds, he clearly doesn't fit in with the collective so he must be far right.”

That's it. Rubin's strayed from the regressive herd and is associating with verboten types so they pin a nasty label on him in as punishment. Harkinson plays along, and the outrage is intensified. Rubin got mad and called him a hack because, yes, this is what hacks do. They write an article about people they despise cravenly cashing in on a bad political movement and include someone who doesn't belong there—someone who just talks to these people. The article's still up and the headline’s the same. Harkinson has it as his pinned tweet.