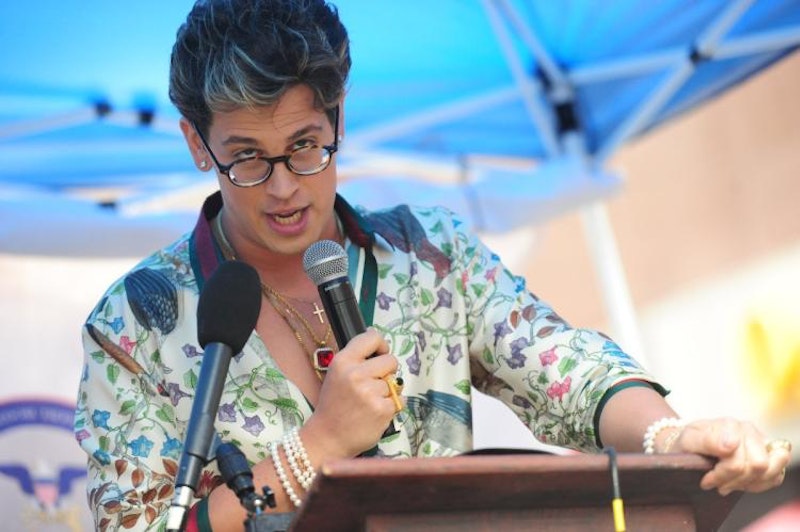 This article by Israeli consul general of New York Dani Dayan, published at Jewish Telegraph Agency, is testimony to the strain people will put themselves through to avoid being seen as problematic allies, or fellow travelers insufficiently dedicated to fellow-feeling.

In an article nominally about rising Muslim star Linda Sarsour but weirdly hung up on half-Jewish right-wing chatterbox Milo Yiannopoulos, Dayan proves his equal opposition to both Sarsour and the king of no-platforming. Confessing his hesitation to speak out against Sarsour—whom he claims, likely correctly, is an anti-Israeli extremist—due to an anti-Sarsour rally held to protest her invitation to give a commencement speech, Dayan writes, “The mere participation of Yiannopoulos in the rally—let alone his words—was abhorrent, he’s on record defending pedophilia,” adding that, ”the moment this individual and his followers coopted the cause against Sarsour’s invitation, I felt compelled to step back; it was not the first time extremists damage a just cause.”

This is what reactionary politics looks like. If you’re into it, I’m out of it. It’s the same thinking that has led many liberals to avoid coming to the defense of Evergreen State College biology professor Bret Weinstein, victim of racist mob aggression that wishes to see him exiled from campus. When the alt-right came to his defense, because the left stayed suspiciously mum on the matter, good lefties knew to treat him like a pariah. If they’re into it, I’m out of it.

(The pedophilia charge, by the way, is bogus. What Yiannopoulos appeared to defend was pederasty. Not that the left is in any way uncomfortable with that, of course. Harvey Milk was after all a pederast, and has been awarded with a Presidential Medal of Freedom, a postage stamp, and a glowing biopic among other honors. The pedophilia angle is merely a cynical way of taking Yiannopoulos down a notch for other transgressions.)

The false equivalence given to Sarsour and Yiannopoulos—an infotainer perceived as deadly serious by detractors—is wildly off the mark. Sarsour has been warmly profiled in the mainstream media, awarded with commencement speeches, and given a co-chair role at the 2017 Women’s March. Meanwhile, Yiannopoulos is persona non grata pretty much everywhere. One would be shocked to see him conducting ceremonial duties at the Peoria Civic Center, much less the City University of New York. The point of Dayan putting Yiannopoulos on a pedestal adjacent to Sarsour’s, and then kicking the leg out from under it, is to give him an opportunity to deploy plausible deniability that he’s in any way sympathetic to those people; people who are also anti-Muslim extremism and so who just might be mistaken for Dayan’s crowd.

Plausible because yes, Yiannopoulos indeed attended and spoke at an anti-Sarsour rally not far from the site of her speech. But it was a shindig that is merely farting in the general direction of a cultural-industrial complex that’s hostile to them. The more relevant set to juxtapose with Sarsour are academic leftists and legions of activists (including White House invitees BLM), not celebrities from the conservative media ghetto whose biggest outlet for disseminating their views is YouTube. But to do that would risk Dayan’s good standing with the left. Better to pretend that the ascendant generation of progressives won’t soon be entirely on board the Sarsour Train and that any hard choices about affiliating with conservatives—many of whom are frustrated old-fashioned liberals—won’t have to be made. We can tolerate anything but the outgroup.

Of course the irony of Yiannopoulos as abominable counterpoint to Sarsour is this: Yiannopoulos defended Sarsour’s right to speak at CUNY School of Public Health, as reported by the Village Voice. Would Sarsour do the same? Would Dayan?