The Politics of Hysteria

It's not "a neutral quality." 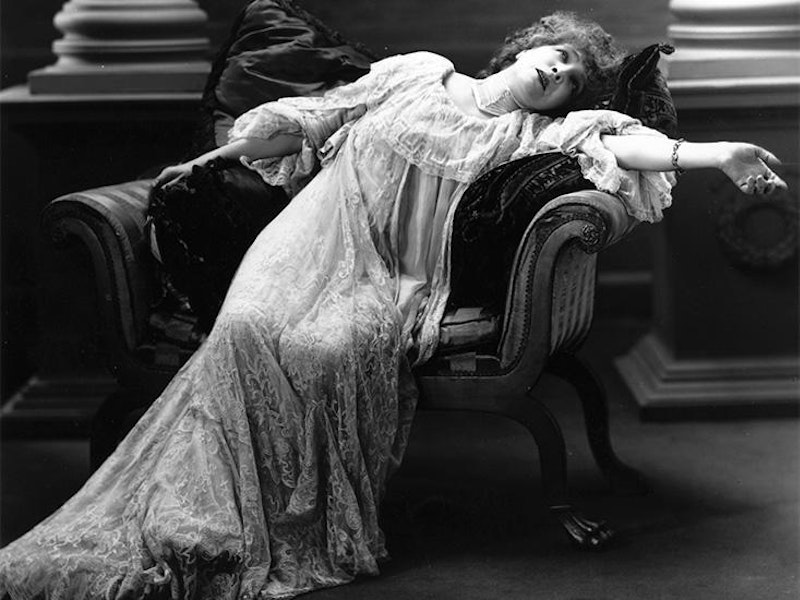 Last Tuesday on Anderson Cooper 360, Trump supporter Jeffrey Lord claimed that hysteria is “a neutral quality”—and no one on the set corrected him. This moment revealed a lack of historical understanding that needs to be rectified, because attempts to undermine political enemies by feminizing them are infusing our political discourse every day. We need to recognize it when it happens.

Language and metaphors shape the way we understand the world. Gender often plays an invisible and—for that very reason—powerful role in these constructions. But we often don’t notice gender at work, because its deployment seems natural. “Neutral,” even.

The practice of associating sexual or reproductive organs with character traits has a long history. Those who are brave are described as having “balls.” Cowards, obviously, lack them. Recently, inspired by the image of “fawning” cabinet members seated around a table, all praising President Trump, Stephen Colbert’s opening monologue presented a striking image of the cabinet’s apparent emasculation—a sign outside the meeting room that read: “Please check your balls at the door.”

“I did not know that Trump had such a strict ‘Please check your balls at the door’ policy!” he joked.

Of course, women cabinet members who were present at the meeting wouldn’t have needed a ticket for the ball check. Women occupy a default status of “coward.” For an incredibly brave woman, an exception can be made and her biology linguistically altered, as in, “Wow, she really has balls!” But the possession of balls is an inherently masculine quality, a positive thing, a compliment.

The connection between balls and bravery has a negative corollary in female anatomy: the “pussy.” A cowardly person—who lacks balls—is a pussy. Pussies are weak figures, dominated by others, who don’t assert themselves. Pussies are timid. Pussies don’t fight back. We rarely hear women being called pussies, because their status as such is understood.

But calling a man a pussy is meant to hurt. And that is why, according to The Daily Beast, Trump strategists decided to deploy a “pussy offensive” against James Comey. Its goal? To undermine “the seriousness of his testimony and claims.” In the days after Comey testified before the Senate Intelligence Committee, Trump campaign manager Corey Lewandowski suggested that Comey didn’t give his notes directly to The New York Times because “he wasn’t man enough.” Trump tweeted that Comey was “very ‘cowardly!’” And Ann Coulter imagined “Comey & Mueller leaving hot tub to refill their peach bellinis.”

While balls and pussies offer two obvious examples of terms that identify character traits with male and female anatomy, the gendered meaning of “hysteria” needs further illumination. Hysteria comes from the Greek hystera, meaning womb; it’s where the term hysterectomy originates. For centuries, a diagnosis of “hysteria” pathologized the uterus itself, depicting it as a breeding ground for women’s madness, delusions, and uncontrollable emotional outbursts—while offering a contrast to the restrained rationality commonly identified with manhood.

Hysteria is by no means “a neutral quality.”

Lady Patriot: “Totally agree. Thought she was going to hyperventilate. What a wacko.”

Jovan: “If Sen. Harris was trying to make a name for herself she did…NUTJOB!!!! Get this woman some therapy before she hurts herself!”

#45: “Hysterical and pompous she gets nowhere.”

Republican politicians outside of the Trump campaign are engaging in this strategy, too. The head of the conservative Freedom Caucus, Mark Meadows, recently wrote a piece for CNN titled, “How Russia Hysteria Paralyzes Congress.” He decried “near-hysterical coverage” by cable news; “media and political hysterics” that hinder the search for truth; “constant hysteria… that could unravel a democracy like ours”; and “hysterics surrounding Russia” that distract Congress from its real work.

The striking abundance of “hysteria” references is not confined to the U.S. In Britain, Nigel Farage recently complained “this hysterical attempt to associate me with the Putin regime is a result of the liberal elite being unable to accept Brexit and Trump.” On June 6, a Tory candidate “mocked Labour as ‘deluded’ and ‘hysterical.’” And Vladimir Putin, who revealed that he doesn’t have bad days because he is “not a woman,” recently told Megyn Kelly that the Trump-Russia story is “some kind of hysteria, and this hysteria never seems to stop. Do we need to give you a pill? Does anyone have a pill? Give them a pill.”

Less often, perhaps, liberals of both sexes also attempt to undercut the power of political opponents by feminizing them. Last week, Bill Maher tweeted: “Trump needs more meetings where people take notes. They’re called psychiatrists.” And Beth Schacter challenged Laura Ingraham’s demand that Sen. Harris “CALM DOWN” by tweeting, “If the GOP is scared of SENATOR Harris asking direct questions, Dems will be happy to send you pearls to clutch. Since you seem to need them.”

Maybe it’s politically effective to engage in this strategy of undermining enemies by feminizing them—taunting them as hysterical pussies who have no balls—but Americans should be under no illusion that the language used in this process is “neutral.” The practice reinforces a gendered dichotomy that devalues women and prizes manly men. In 2017, our political discourse should be smarter than that.