The contrast that wasn’t. 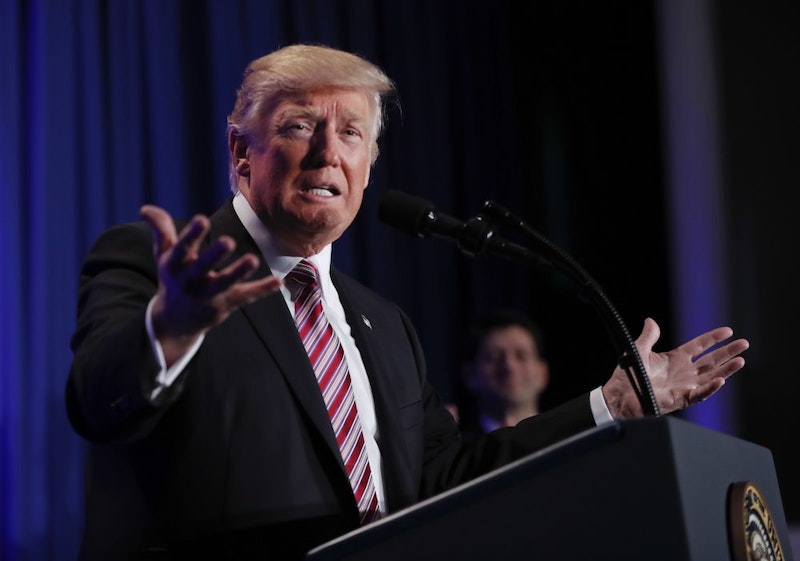 If the headline says “The New Republican Model: Strong Defenders of President Trump,” the article ought to have Republicans defending that idiot, Donald Trump. There are none in Paul Kane’s article at The Washington Post. Further, the piece tries to fob off readers with an ersatz before-and-after. At last year’s retreat for congressional Republicans, we’re told, Trump “did not stick around for a question-and-answer session that has long been a tradition for Republican and Democratic presidents at policy retreats.” Whereas this year, the article proceeds, “Republicans at the State of the Union address burst into chants of ‘U-S-A! U-S-A!’ in support of the president.”

Kane says the “boisterous reaction” is the result of “a successful final few months of 2017,” and no doubt morale has picked up with passage of the tax bill. But dig what else Kane tells us. At this year’s retreat for congressional Republicans, what did Trump do? The same thing as last year. Not only that, the Vice President followed his lead. “Neither Pence, who spoke here Wednesday night, nor Trump took questions from their supposed allies,” Kane writes. This is in the paragraph where Kane to-be-sure’s his story about the new closeness between Trump and the GOP (“It’s far from a perfect bond”). Of course, he might’ve written a story about continued tensions between Trump and the GOP, and to-be-sure’d that with the State of the Union chant (“Enthusiasm does flare at times”).

If only Republicans at last year’s SOTU had sat on their hands, or if Republicans at this year’s congressional retreat had been able to ask Trump questions. Then the article could demonstrate the “stark contrast” it talks about. Or the piece might’ve said that Trump and the GOP started last year on the same team but that they weren’t thrilled about it, and that this year they’re still on the same team despite moments when a split seemed possible (thanks to the Comey firing, the flopped assault on Obamacare, and Trump’s immense problems with adult behavior). But no, the article pushes for its “contrast,” and it pretends its case has a centerpiece that isn’t there.

Belated shutdown analysis. The Democrats threw down over an issue that, by definition, most people don’t have a stake in. There are about 700,000 or 800,000 Americans who came here without papers and did so under the age of 18. On the other hand, there are 323 million Americans who didn’t. Most people see no way that kicking out the Dreamers could be good or decent. But they see no way that anybody but the Dreamers would be hurt. All right, not just the Dreamers. Their families too, their co-workers, their employers, their employees, and on. All in all, not a small group—but far smaller than the public at large. The American public knows that the Dreamers are a good cause. That doesn’t mean they’re the public’s cause. As far as self-interest and first-hand involvement are concerned, most Americans look on the Dreamers and their plight as something happening on a raft someplace.