Corbyn and Netanyahu, Together at Last

Corbyn's anti-Semitic remarks are a boon for far-right Zionism. 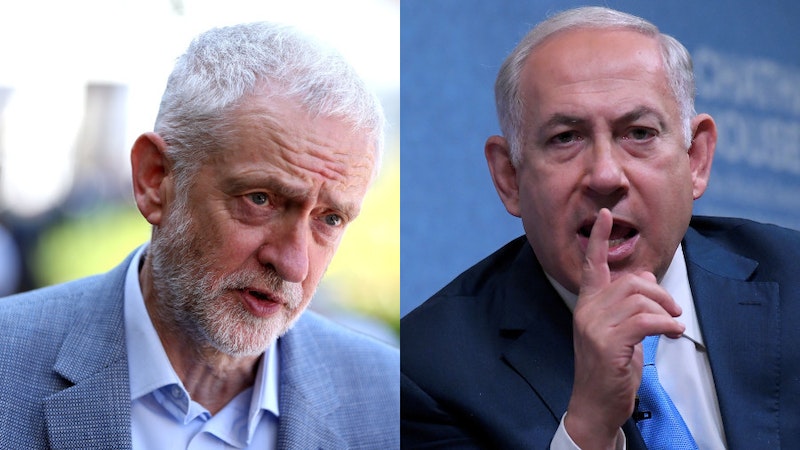 Jeremy Corbyn has been accused of anti-Semitism numerous times since he took over the leadership of the UK Labour party. He's an outspoken proponent of Palestinian rights, and he's argued, with some justice, that he's falsely accused of bigotry simply because he opposes Israel national policy.

Last week, a 2013 video emerged in which Corbyn uses an ugly, anti-Semitic dog whistle. In doing so, he unwittingly demonstrates why anti-Semitism is incompatible with anti-Zionism, and why the left undermines its commitment to Palestinian rights when it conflates Zionism and Judaism.

Corbyn's comments are from a speech at the Palestinian Return Centre. He praised a speech by Palestinian ambassador Manuel Hassassian and criticized Zionists who objected to it. Those Zionists, Corbyn said, "clearly have two problems. One is that they don't want to study history, and secondly, having lived in this country for a very long time, probably all their lives [they] don't understand English irony either."

Corbyn sets up an unfortunate contrast between Zionists and the English that resonates strongly with anti-Semitism. Zionists, Corbyn says, have lived in England all their lives, but aren't really English. They’re eternal foreigners—which is one of the most persistent, and dangerous stereotypes of Jewish people. Hitler harped on the idea that Jewish people were outsiders and immigrants, who could never fully assimilate, no matter how long they lived in Germany. Anti-Semitic Soviet campaigns referred to Jewish people as "rootless cosmopolitans," who had no true home, and did not partake of the true rooted experience of Russian national character.

Corbyn's supporters have argued that he was referring to particular Zionists, some of whom were not Jewish. But this is unconvincing, and irrelevant. Calling out any Zionists for being aliens and foreigners in their own country activates the history of anti-Semitic stereotypes. Whatever his intentions, Corbyn attacked Zionists as Jews. He insults them not for their ideas, but for their lack of true English character, and inability to assimilate. That's anti-Semitic.

It also plays directly into Zionist talking points that undermine Corbyn's supposed commitment to Palestinian rights. Netanyahu's hard-right conservative government in Israel does exactly what Corbyn did here—conflate Zionists with Jewish people, and suggest that both are only truly at home in Israel.

Netanyahu's government passed a law last month affirming that Israeli national identity is specifically Jewish; a measure that seems designed to turn non-Jewish Israelis into second-class citizens. Netanyahu has enthusiastically embraced the Trump administration, including figures like Steve Bannon with connections to the virulently anti-Semitic alt-right. For Netanyahu, Israel's interests are Jewish interests, and someone like Bannon, who supports Israel oppression of the Palestinians, can’t be anti-Semitic no matter what he says about, or does to, Jewish people in the diaspora. Corbyn and Netanyahu agree; the core of Jewish identity is Israel.

This is a lie. Many Jewish people support Palestinian rights and oppose Netanyahu's government. Many Jewish people don't care about, or think that much about Israel. Conversely, the most influential Zionists in the United States, and therefore in the world outside Israel, aren't Jewish. They're American evangelicals and imperialist Islamophobes who support Israel because of its supposed role in the endtimes, and/or because they see it as a geopolitical ally.

Highlighting these distinctions between Netanyahu's Zionism and Judaism in particular is vital for any critic of Israel policy—and for anyone who opposes anti-Semitism against diaspora Jewish people. Netanyahu conflates Israel and Jewishness in order to present Israel as persecuted, and justified in violence against Palestinian people. He does this while elaborately ignoring anti-Semitism against Jewish people abroad—even though it’s hatred of diaspora Jews in particular that’s led to the worst atrocities against Jewish people in the modern era.

Rather than pushing back against Netanyahu's narrative, Corbyn, in his 2013 remarks, co-signs it. Zionists, Corbyn implies, are always really citizens of Israel, and out of place in other nations. Netanyahu ally Trump couldn't have put it more clearly.

When Corbyn says that people who’ve lived in England their entire lives are still not English, he's not embracing left goals. Like Netanyahu, he's embracing ethno-nationalism—an ideology that has historically been a disaster for Jews, Palestinians, and for all marginalized people. Corbyn's comments are a betrayal of his own commitment to the oppressed.