There's something about talk show hosts. 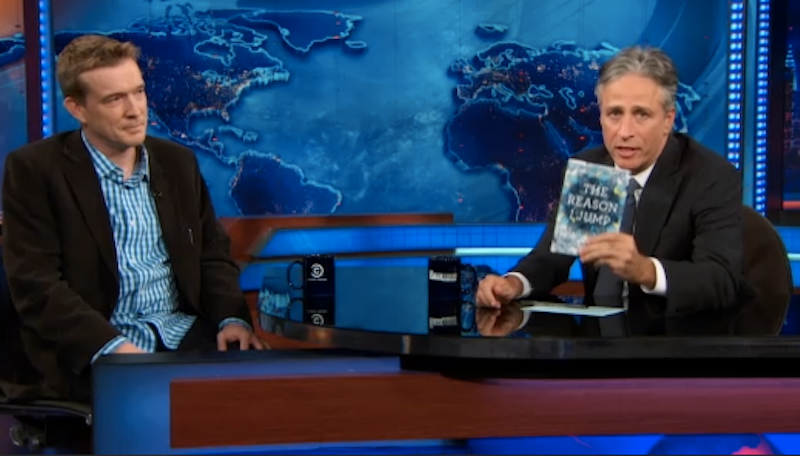 Jon Stewart was talking about autism the other night. His guest was the writer David Mitchell, who had helped translate a memoir by a 13-year-old boy suffering from autism. Mitchell mentioned that Stewart did charity work for the autistic, and Stewart seemed to care very much about the book (which is The Reason I Jump by Naoki Higashida). “I don't normally urge you,” he said to us, the audience. “Please, if you get a chance, please pick it up. It is remarkable.”

As he said this, he wagged the book in the direction of the camera. Stewart leaned forward a bit to do so; his book was wagging at the far edge of his desk, toward the camera. That's a long way for Stewart to go when displaying a guest's book. But he kept the book at a tilt and jiggled it, so catching the title became trickier than it might have been.

The book's cover had been given a few seconds at the start of the interview, per procedure. But the more seconds a cover gets the better. At least that's the case if you want viewers to buy the thing. Stewart didn't really give the autism book its extra seconds. He wanted to act out how he felt about the book, so he agitated the thing in the air.

All this is okay from the point of view of autism awareness and Jon Stewart's moral character. The waggling of the book counts in one way, as a reminder that TV hosts and regular people live differently. Stewart knows about the difference; he likes to take shots at the pageant-like, pseudo-human way TV personalities can behave on camera. But he falls into the same trap himself.

When he waggled the autism book Stewart was coming on casual and ragged, like talk show conventions were beneath him. Yet he was doing something artificial. He was acting out his feelings about the book by turning himself into a makeshift, better-than-nothing special effect. Everything important on The Daily Show thrashes and bleeps. Now David Mitchell's book waggled in mid-air because Stewart was willing to pitch in and do the job. The movement signaled the book's importance, meaning its importance to Jon Stewart.

Would anybody but a TV host do that? I mean, stick your arm out and waggle a book to validate the thing and let people know its worth? I don't think so. For the behavior to make sense you need a camera and you need your name in the show's title. Those are special conditions for living.

A sentence a conservative could not write. Greg Sargent at The Plum Line has something to say. “This is welcome: The Obama administration moves forward with efforts to scale back penalties for low-level federal drug offenses in keeping with the promise of sentencing reforms.” My gosh, what a shambles. First, it's a sentence that refuses to admit what it's saying. What the sentence means is that recent tremors of bureaucratic activity hold out hope of eventual forward motion. But it's written as if something was being accomplished right now. So then the sentence has to string together a sausage chain of words to indicate what that something is (“efforts to scale back,” etc.). Then it tacks on “with the promise of sentencing reforms” for context.

This groaning, misbegotten caterpillar with the bleeding knees trudges to its death. Die, bastard. Your creator never loved you. He never looked at you whole and saw what you were good for and how your birth mission could be brought to success. He shat you out his fingers and assumed you'd do because you didn't fall off the screen. Really, he assumed that you would live in other people's heads just as richly as you lived in his, and he never noticed that you never lived richly in his head or anywhere. Liberals have trouble experiencing the reality of the lived moment. For instance they can't hear the playback of a sentence, and that's a problem when it comes to writing.

Conservatives are tuned into those few seconds when a sentence flickers through the head. They can tell what works and what doesn't because they are true to the moment that they're living. They don't tell themselves they're living some other moment, and they don't fudge matters until they're living a blur. This makes them very good at writing and p.r., practices that demand a sense of how individuals will react to the words and ideas you loft into their brains. But the trait isn't much good for understanding government or society. When you're dealing with how things are, not how they seem, you find that your immediate viewpoint is really just provisional. Its value is as part of a heap of viewpoints endlessly sifting themselves out as data is absorbed and debated. A conservative never has a provisional viewpoint.

Liberal writers (by which I mean liberal writers of journalism or advocacy pieces, not playwrights or novelists who like Obama) have a childish inability to take note of their own reactions when reading a sentence they've written. Vanity does the rest; since they can't experience the sentence, they fill in the blank and assume the sentence is as good as writing it made them feel. Too bad liberals think so highly of writing, because otherwise they might leave it alone. As for conservatives… well, the only thing a conservative should do is write a sentence.