Boehner Doesn't Know What Hit Him

The man with the deep voice is on a self-destruction course. 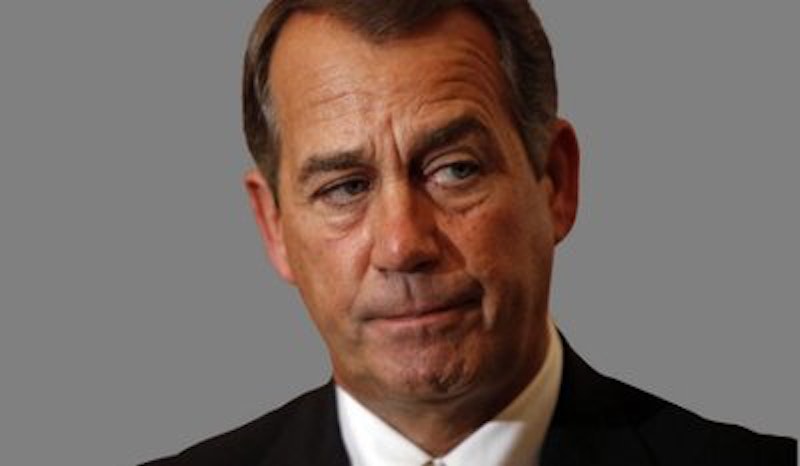 For a leaf hurtling before a storm, John Boehner is one cool customer. He sat at a glass table Sunday morning and assured the viewers of ABC’s This Week that America was being brought to default by President Obama's refusal to talk with him. The House Speaker seemed dryly impatient but determined to keep his temper in check. His rumble of a baritone rose now and then to a trumpet blare, and then subsided. Pundits talk about “the adult in the room.” Boehner gave a good performance as such. He's underrated that way, but it's too bad he didn't make more sense.

Boehner said the House of Representatives wouldn't just hold a vote and raise the debt ceiling and let America pay what's currently due its creditors. According to Boehner, that's not something you can just assume lawmakers will do. Three of the last four presidents “negotiated” or had a “conversation” or took part in “fights” over raising the debt limit, he said. He made it sound like this is part of Washington give-and-take.

On the other hand, he agreed (in the phrasing of George Stephanopoulos, his interviewer) that failure to raise the debt limit would bring on “a financial crisis and recession that could echo the events of 2008 or worse.” He agreed that “credit markets could freeze, the value of the dollar could plummet, U.S. interest rates could skyrocket.” He deplored the President's stubborn refusal to avoid this disaster.

He didn't explain why a sane country would make a habit of risking such a catastrophe. If typical Washington give-and-take involves the chance of global meltdown, then the capital's way of doing things is even crazier than Republicans have always said. Luckily that's not the case. Previous presidents did not offer concessions in return for raising the debt limit. For instance, the “three fights over the debt limit” that Boehner remembers from the Clinton years all consisted of the White House ignoring Republican threats until the rebels gave up.

Unluckily, there's now a critical mass of House Republicans crazy enough to think Armageddon is part of the negotiation toolbox. They can vote Boehner out of his speakership if he proves too squishy. The government shut down because they decided to cut off its money unless Obamacare was defunded or delayed or otherwise tinkered with. Boehner tried to get them off the idea while being non-squishy; his solution was to suggest a long list of demands the GOP could make on Obama if everybody waited for the debt limit. The House crazies told him they weren't going to wait. (“But you know, working with my members, they decided, well, let's do it now,” as Boehner said on This Week.)

What was that truck? A takeout in The New York Times reports the hard work and many dollars that conservative groups have put into convincing Republican lawmakers they had better defund Obamacare. “This was never going to be a strategy that was going to win inside the Beltway,” says Michael A. Needham, chief executive of Heritage Action for America. “It was going to be a strategy where, during August, people would go home and hear from their constituents."

Apparently so. The Washington Examiner tells us that a well-placed but unidentified House Republican said the leadership didn't know what hit it. “They got surprised a little bit by the Obamacare thing,” the unidentified lawmaker said. “This was something that blew up in August. Nobody really saw it coming.” Having been pushed into the Obamacare fight, the Republicans then found that the Democrats wouldn't dicker over a measure that had already been passed by Congress and upheld by the Supreme Court. Hence the shutdown.

All this was a surprise, at least to the unidentified Republican. “To be honest with you, I did not think we'd be in a government shutdown situation,” he said. “I'm surprised that we're here.” Being a conservative, he reached for a parallel from military history: “We stumbled into a situation like Gettysburg that nobody planned, and all of a sudden each side is feeding more troops into it, and it's turning into a much bigger deal.” The key word in that passage isn't “Gettysburg,” of course. It's “stumbled.”

The man's final thought: “I don't think that either Boehner or the president really have much of a plan beyond the next 24 hours. Does this look like a planned-out operation?”