Congratulations or Sorry That Happened 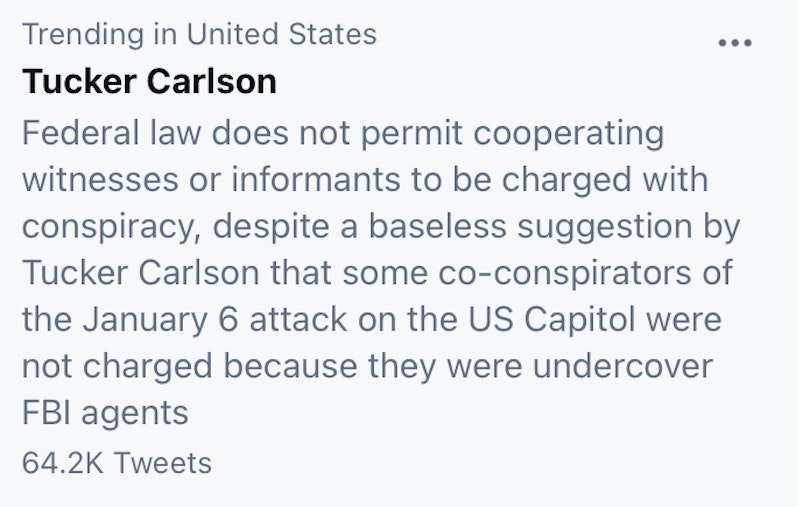 A midweek civics lesson from Twitter: “Federal law does not permit cooperating witnesses or informants to be charged with conspiracy, despite a baseless suggestion by Tucker Carlson that some co-conspirators of the January 6 attack on the US Capitol were not charged because they were undercover FBI agents.” I’m more confused than I was before I read that and typed it out, so job well done. Agent provocateurs were clearly everywhere that day, just like last summer when tall Terminator men in all black combat gear were caught on smartphones smashing windows and planting bricks in Minneapolis.

Unless your media consumption is limited to cable and network news, it’s impossible to miss how many saboteurs and agents, double agents, and triple reverse con men have been dragging the streets at every protest and riot—to be sure, this has always been the case, but only since the mid-2010s have smartphones with high-definition photo and video recording made “operations” like this much harder to hide.

But it’s obvious that enough people still just watch television or listen to the radio—right-wing or NPR—and fall in line. These warnings have been popping up on Twitter for months now, usually related to the coronavirus vaccine. “Don’t worry, the Pfizer COVID-19 vaccine does not cause the body to become magnetic.” Remember “shedding proteins”? This would be so much fun if nobody died or lost their job.

Another development in “trends” is the admittedly very funny bit of writing headlines that are so phenomenally stupid, unbelievable, or demonstrably false that they move people to quote tweet them and thus talk about them. Whether it’s Nicole Kidman being the “spitting image” of Lucille Ball (far from it), or Leonardo DiCaprio looking “unrecognizable” in a new Martin Scorsese film (he looks the same), The New York Post always knows how to hit ‘em hard and wide: leave no one left unbruised or left out of the joke. Never forget their memorial for Ike Turner: “IKE BEATS TINA TO DEATH.”

Since I wrote about one “attempted hijacking,” more and more people have acted up on airplanes. This is striking, a line that hasn’t been crossed since 9/11: I don’t remember a single attempted domestic plane hijacking in the last 20 years that left anybody injured or dead. Now, none of these recent examples were serious threats or ideologically motivated, but this is more rot. I find it disturbing to watch leftist journalists like Ana Kasparian and Aaron Maté attacking each other, getting personal and trivial about who’s being funded by who and for what cause.

Ostensibly, these people are moving in the same direction politically: Kasparian is a co-host of The Young Turks while Maté is a journalist and reporter for The Grayzone. In our binary electoral system, they both wanted Bernie Sanders bad. Donald Trump was an unalloyed evil and a fuck-up, even if the media and all liberals vastly and irresponsibly overstated the threat he posed. This is enough common ground to establish a solidarity that should allow people to move through bickering egos and hurt feelings and the sharp anger and cruelty of smartphone addiction. I understand that journalists need Twitter, but seeing how many of them—good ones, too—indulge in endless reply threads with idiots, or fighting amongst their peers over nothing, is too much.

Even more frightening is the malnourished educational system that produced someone like Emily Jashinsky, who somehow ended up as a co-host for The Hill’s Rising with Ryan Grim, despite being unaware of who liberated the Nazi concentration camps at the end of World War II. Grim is a gentleman, but he does “destroy” her, to use The Majority Report’s screaming YouTube clip headline. Jashinsky almost plays the scene for laughs, as Grim corrects her multiple times and she gives him even more opportunities to get in perfectly timed “punchlines”—like who freed Auschwitz.

That’s to say nothing of Jennifer Rubin remarking the other day, “Biden sounding Reaganesque (that's a compliment).” Unlike The New York Post, Rubin and her colleagues at The Washington Post don’t need to be warned or trained to refrain from making jokes about the President’s manifest “cognitive decline”—they’re fully gone. Rubin can plausibly tweet something like that, knowing full well that Ronald Reagan had Alzheimer’s when he was still in office, and not think twice about Biden’s situation. The man was by turns belligerent and incoherent, unable to answer multiple questions and unable to keep from calling a reporter “too dumb to understand” his answer.

Biden made a pro-forma apology to the reporter, CNN’s Kaitlan Collins, but he also complained to the gaggle of press on the tarmac that, “You never ask fair questions.” Leave it to a near-future invalid to complain about having a cakewalk election and a killer public opinion honeymoon coming after Donald Trump. But, as we all thought, both Biden and Kamala Harris have fucked up already and made enough gaffes to last Barack Obama a full term.

Trump’s hell was merely distinct from our current inferno, one which we’re simply more familiar with. This is the hell of eight years of George W. Bush and two endless wars that drained whatever spirituality and true patriotism was left in this country. This is the hell of tanks bought and made for the Iraq War used on protestors in Ferguson and Minneapolis. Because the “hell” of Trump was how visible he made it, how he reveled in rubbing it in. Like I wrote many times, if I’m getting fucked, give me some acknowledgment. With a demented President and a quixotic (that’s a compliment) Vice President doing the same things and pursuing the same foreign policy of every previous administration, we get nothing. Many people have to pretend that anything fundamental about “the situation” has changed, for fear of losing their job or friends. More scary is how many people really believe things are getting better.