Biden says "America is back," yet nothing has changed about our Russia-obssessed foreign policy. 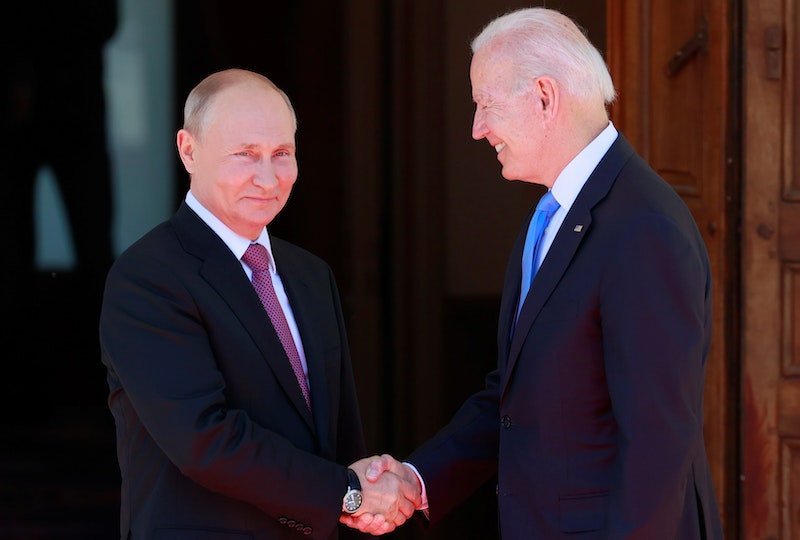 President Joe Biden continues to make headlines for his recent sit-down with Russia’s Vladimir Putin. While many news outlets have focused on Biden’s post-meeting admission that he was once again given a list of reporters to call on, not to mention Biden losing his temper with CNN’s Kaitlan Collins, few websites have paid attention to Biden giving Putin a list of 16 key infrastructure entities that are “off-limits” to Russian cyberattacks.

"I talked about the proposition that certain critical infrastructure should be off-limits to attack, period, by cyber or any other means," Biden said after his meeting with Putin in Geneva. "I gave them a list, and I don't have it in front of me, if I am not mistaken, of 16 entities—16 defined as critical infrastructure, from the energy sector to our water systems.”

I appreciate the President confronting a shady foreign leader about cyberattacks many people believe are coming from inside Russia. Still, Biden should’ve had the guts to say all cyberattacks are off-limits, whether they be cyber-attacks on public systems or private entities. This is the same man who described Putin in March as a “killer.” He also told Americans numerous times after the November election that he was going to be a president for everyone. Where is that president? The one that went to Geneva was more poodle than pit bull. He basically went to Putin and said, “I’m okay with cyberattacks, just not in certain situations.” What happens if a news outlet publishes an explosive article on Putin’s misdeeds? Will Biden dismiss it based on his opinion that reporters don’t ask him positive questions?

Giving Putin a list was, to use a Biden phrase, “a bonehead idea,” and it calls into question whether he really is the foreign policy expert that people thought he was in 2008 when Barack Obama chose Biden to be his running mate. I don’t think Biden should’ve gone into the meeting with guns blazing and whipping out the nuclear football as if to say, “I’m going to annihilate you if you don’t stop it,” but Putin isn’t the kind of guy that goes weak at the knees over a trademark grin and aviator glasses.

If we want peace, we get it through strength. Biden should’ve told Putin how the intelligence community knows cyberattacks are coming from Russians and that he needs to put a stop to it now. It could have been his “Mr. Gorbachev, tear down this wall!” moment. That’s one of the things that people liked about Presidents Reagan and Trump. They weren’t afraid to speak their mind. We might not always have liked how Trump said things, but he was a president some Americans didn’t worry about when Putin and foreign leaders opted not to crack down on criminals living in their nations. With all his stammering and nonsensical answers, his “I’m going to get in trouble if I keep taking questions” remarks to reporters, I’ve no idea what to expect from Biden after Geneva. He says America is back, but it’s more like we’re back to a vanilla foreign policy that’ll do nothing more than watch Russia be Russia, take over territory such as Crimea, and so on. That is what happened in 2014 when Obama was in the White House. Where was Biden? Serving as Vice President and foreign policy advisor.